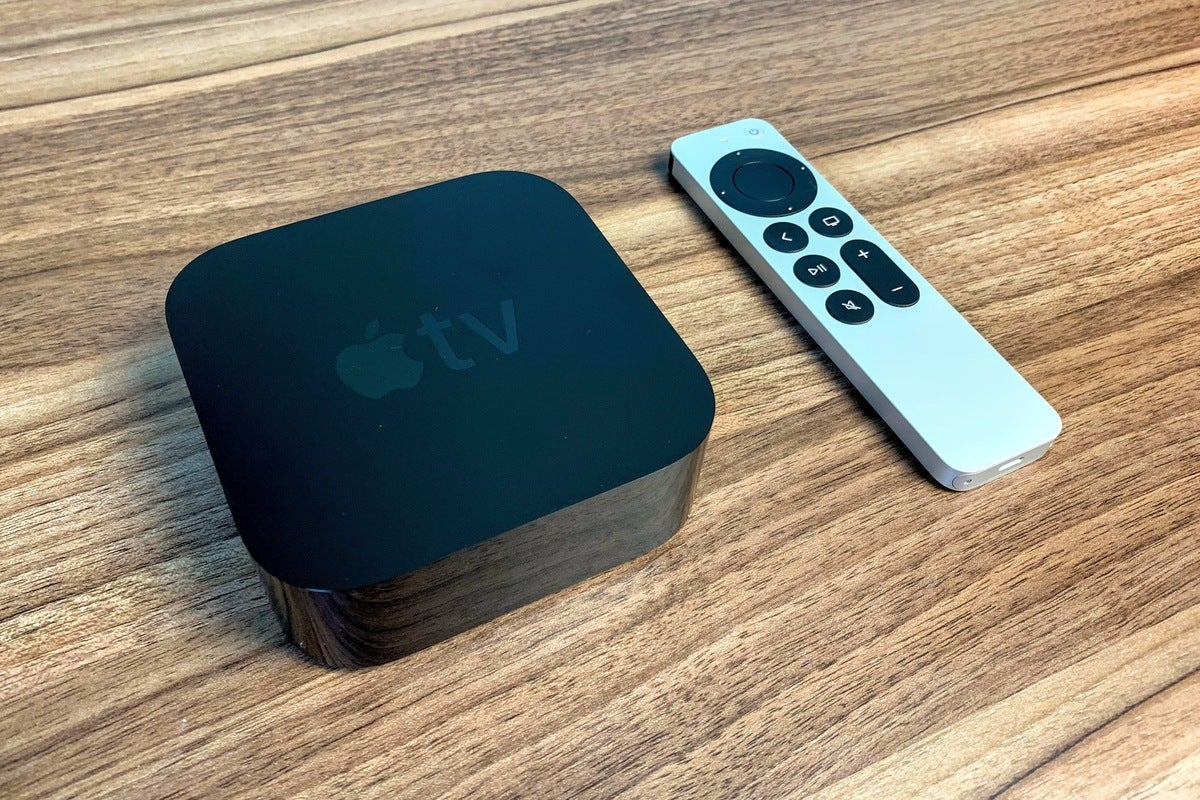 When considering the Apple TV 4K, you have to admire Apple’s tenacity.

Despite overwhelming evidence that most people prefer sub-$50 streaming dongles—or whatever software is built into their smart TVs—Apple is still sticking it out with a $179 streaming box. The company deigns not to sully its living-room experience with anything less than the fastest processors, the finest build materials, and the most bells and whistles—including the ability to operate as a HomeKit smart home hub and as a Thread border router. This review, however, will focus on the device’s media-streaming prowess.

The result is admittedly exquisite. The new Apple TV 4K is a cut above other streaming players in speed, polish, app support and privacy, and the 2021 Siri remote addresses the biggest complaints about the previous version. The device is also loaded with little tricks that make picking something to watch seem more pleasant.

None of that makes the price much easier to stomach. Devices like Amazon’s Fire TV Stick 4K and the Chromecast with Google TV are equally capable at playing 4K HDR video at less than a third of the price, and they have a few unique features of their own. While the Apple TV 4K is worth the money if you’re willing to spend it, it’s not essential if you aren’t.

This review is part of TechHive’s coverage of the best media streamers, where you’ll find reviews of the competition’s offerings, plus a buyer’s guide to the features you should consider when shopping for this type of product.

What’s in the (streaming) box

The 2021 Apple TV 4K has the same black puck design as earlier models, with a matte finish on top and a glossy finish along its rounded sides. The power supply is built into the box, so the power cord doesn’t need its own bulky adapter. In addition to the power connector around back, there’s an HDMI 2.1 input and a gigabit ethernet port.

Inside, Apple TV 4K has an A12 processor—up from an A10 on the 2017 model—but I could not discern any difference in speed between the two. They both facilitate smooth scrolling, snappy animations, and the ability to switch between recent apps by double-tapping the home button. They also both occasionally display some light choppiness while scrolling through menus on a 4K television.

The specs are otherwise the same as before, with support for Dolby Vision, HDR10+, and Dolby Atmos audio. The Apple TV 4K also supports Bluetooth for connecting external headphones and AirPlay 2 for sending media from other devices around the house or mirroring the content on your iPhone on your TV.

The biggest change in the 2021 Apple TV 4K comes not from the streaming box, but from its Siri remote, which is a total departure from the polarizing 2017 version. (It’s also available as a standalone upgrade for the previous Apple TV HD and Apple TV 4K.)

Yes, the new remote has a proper directional pad now, while swipe gestures have become an optional feature. If you’d rather not swipe across the d-pad surface to move through menus, you can just click the outer ring instead.

The remote itself is also longer, taller, and heavier than its predecessor, so it’s less likely to slip between couch cushions, and it’s covered back-to-front in aluminum instead of having shatter-prone glass on the surface. The buttons feel a little nicer as well thanks to a soft-touch coating, and the remote now has both a power button and a mute button where voice control used to be. (The Siri button has migrated over to the remote’s right side.)

In practice, this means the remote will feel less like a foreign object to non-nerds, and the metal finish helps make the Apple TV 4K feel classier than other streamers in ways the box itself cannot. The remote is also excellent at detecting TVs or soundbars for volume control without any setup, though you can manually program volume functions over IR if need be.

That’s not to say the remote is perfect. My brain can never quite decide whether to swipe or click on the remote, and even when I commit to the latter, accidental swipes are common. You can disable the touchpad entirely through Apple’s menus, but then you lose a convenient way to fast forward or rewind through video. The remote also lets you jog through video with a circular gesture around the directional pad, but I found this tricky to invoke. Apple’s hybrid touch-and-click concept still has promise, but it needs more refinement on the software side.

There’s also the matter of not being able to easily find the remote if it gets lost. Perhaps Apple should’ve included a speaker or U1 chip for tracking the remote down, but I’m wary of anything that might further drive up the cost. As it stands, replacing a lost or broken Siri remote costs $59. (No one’s stopping you from sticking your own AirTag on it.)

The Apple TV hasn’t undergone any dramatic changes on the software front since the last hardware upgrade in 2017, but that’s okay. Back then, tvOS was already one of the more forward-thinking TV platforms, offering not just a grid of apps, but a unified content guide that lets you browse across streaming services.

This guide—confusingly called the Apple TV app—comes up whenever you press the home button, displaying the latest movies or shows you’ve been watching along with recommendations on what to watch next. It’s a delightful way to make sense of streaming TV, though the guide’s lack of Netflix integration remains a profound bummer.

A traditional app launcher is available as well with a second click of the home button—or you can map it to a single click by default—and it’s a better app grid than what other streamers offer. There are no ads cluttering the home screen like you’ll find on Fire TV and Roku players, and you can even sort apps into folders.

Apple is also unique in the way it handles data privacy. Whenever you launch a new app, you’ll be asked for permission if it wants to share data with other apps or websites, including Apple’s.

More broadly, Apple isn’t in the business of building a detailed profile on you for the purpose of selling targeted ads, whereas that’s how Roku, Google, and a slew of smart TV vendors make their money. While the Apple TV isn’t some magical privacy shield—individual apps can still collect whatever they want about your viewing habits—it goes further than other platforms in limiting what data gets passed around.

Atop all that, Apple has managed to avoid the kind of carriage dispute drama that’s caused headaches for Roku and Fire TV owners. That means you generally don’t need  to worry about any popular apps being unavailable on the platform, temporarily or otherwise.

All the small things

So far, I’ve described the broad strokes of what makes the Apple TV 4K so pleasant. But the device is also packed with little bells and whistles that help it stand out from other streaming platforms.

A short list: It works well with Bluetooth headphones (Fire TV devices don’t); it has a menu for switching between recent apps (only the Nvidia Shield TV has something similar); you can type in passwords by voice; it supports AirPlay for sending media from your phone or playing multi-room audio from your TV; it acts as a HomeKit hub for controlling smart home devices; and it supports picture-in-picture. It’s even a decent system for iOS games if you connect an Xbox or PlayStation controller over Bluetooth, and if you have an Apple Watch, you can see exercise data on the big screen during Apple Fitness+ workouts.

Siri also shines on the Apple TV, especially for detailed genre searches. You can ask for things like “indie sci-fi movies” or “crime dramas from the 90s,” and you can filter down the results with commands like “just the most popular ones” or “just the ones on Netflix.” A long list of apps also let you launch videos directly by voice, with no further interaction needed. The only downside is that you can’t execute these commands hands-free with a HomePod speaker.

None of these are killer features on their own, but they add up in a way that feels more comprehensive than anything else.

The Apple TV 4K does still have its blind spots. Amazon’s Fire TV devices and Google’s Chromecasts are still better at hands-free voice control, while Roku still excels at surfacing free content to watch. The Nvidia Shield TV makes HD video look better, and the Pro variant is a great high-end option for running your own media center or DVR server.

Of course, the $179 asking price can also feel like a tough sell when the core act of watching video is largely the same on any 4K HDR streaming device. But now more than ever, Apple’s fancy streaming box provides tangible benefits in return.

Denial of responsibility! TechNewsBoy.com is an automatic aggregator around the global media. All the content are available free on Internet. We have just arranged it in one platform for educational purpose only. In each content, the hyperlink to the primary source is specified. All trademarks belong to their rightful owners, all materials to their authors. If you are the owner of the content and do not want us to publish your materials on our website, please contact us by email – [email protected]. The content will be deleted within 24 hours.
appleboxgadget updateReviewstreamingtech boytech newstech news boy
Share FacebookTwitterGoogle+ReddItWhatsAppPinterestEmail

Scientists learn what fuels the ‘natural killers’ of the immune system