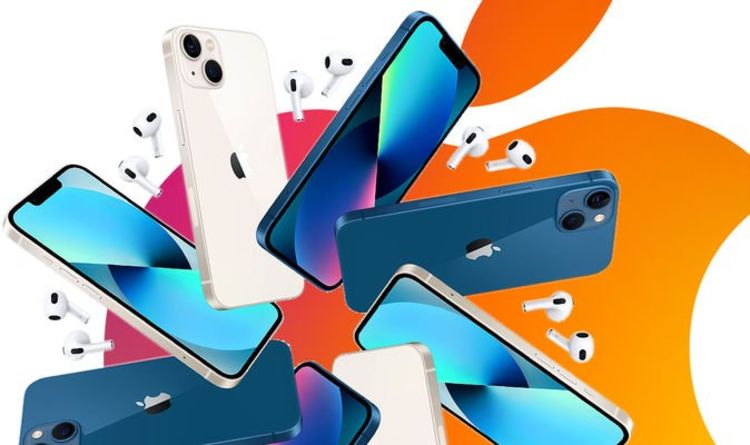 Apple has launched its Black Friday event – but don’t get too excited. While the Californian company takes part in the blockbuster sales event, it doesn’t reduce the price of its iPhone, Apple Watch, iPad, Mac, or any other devices in the Apple Store. Instead, everything is sold at its usual price, but Apple will bundle a gift card up to £160 to spend on new accessories from the Apple Store, other Apple-branded gadgets, or some new apps from the Mac or iPhone App Store to use with your new purchase.

Just like with previous years, Apple doesn’t directly refer to its promotion as being part of “Black Friday”. Instead, the Californian company calls its limited-time promotion the “Apple Shopping Event”. Just like previous years, the event lasts four days – covering Black Friday itself, the weekend, and what was traditionally known as Cyber Monday.

OK, so what gift cards are available?

First up, you can secure a gift card with a value of up to £40 when you buy an iPhone from the Apple Store. However, just like previous years, Apple isn’t including its latest handsets in the deals. So, if you’re looking to buy a brand-new iPhone 13 or iPhone 13 Pro, which launched back in September, you won’t be eligible for the free gift card. However, those looking to buy an iPhone 12, iPhone 12 mini, or iPhone SE will get a free £40 gift card with their purchase. As mentioned above, this gift card can be put towards hardware purchases from the Apple Store (for a sizeable discount on a new pair of AirPods or a case, for example) or can be redeemed towards software in the App Store.

You’ll also get a £40 gift card when buying the Apple TV HD, Apple TV 4K, Apple Watch SE and Apple Watch Series 3. For the first time, Apple is also offering a £40 gift card for anyone who buys its most popular accessories over the four-day event, including the second-generation Apple Pencil, Smart Keyboard Folio, MagSafe Duo Charger, a four-pack of AirTag trackers, or Apple Magic Keyboard for an iPad.

In another departure from previous years, AirPods are also eligible for a free gift card. You’ll get £60 to spend in the Apple Store when you buy the AirPods Pro, AirPods Max, or the second-generation (£119) or third-generation (£169) AirPods.

While a number of other retailers have dropped the price of these wireless ‘buds, there are still reasons to buy direct from the Apple Store over the likes of Amazon and John Lewis. Apple offers free engraving, so you can add a custom message (or emoji) for a loved one when buying from the Apple Store. Coupled with the generous £60 gift card – that’s half the cost of the second-generation in the form of a gift card to spend on another Apple gadget! – this is easily the best deal of the bunch.

Elsewhere, buying an iPad Pro, with either the 11- or 12.9-inch display, will net you an £80 gift card to spend another day, while the purchase of a MacBook Air, MacBook Pro 13-inch or Mac mini will unlock the same freebie. Meanwhile, the iMac 27-inch arrives with a bumper £160 gift card for the Apple Store. Beats headphones round out the promotion, with a £40 gift card available with select models, including the Studio3 Wireless and Solo3 Wireless.

If you were looking to spend a load of extra cash on cases, charging cables, Apple Watch straps, Apple Pencils, or AirPods in the Apple Store anyway… it might be worth buying one of the above devices to get the gift card. If you’re only looking to buy a single Apple device this Black Friday, you might be better off looking at the high street retailers offering discounts on the products themselves.

While the Apple Store is currently the only place to get a free engraving on your AirPods, Apple Pencil, iPad or a number of other gadgets from the brand, there are advantages to shopping elsewhere too. For example, John Lewis offers an extra 12-months warranty than you’ll get from Apple. While we don’t expect anything to go awry in the first two years of owning your shiny new Apple gadget, it’s reassuring to know that John Lewis will replace your new earbuds, iPad, Mac or iPhone if something does go wrong long after Apple will point you towards its out-of-warranty repairs price list.

If you’ve been considering these convenient wireless ‘buds for a while, this is definitely the time to jump in. If you’re a Prime member, it makes sense to opt for Amazon as you’ll get next-day delivery for free. However, shoppers with an Argos on their high street might be able to pick up these popular ‘buds on the same day – so it’s worth checking stock nearby. And finally, John Lewis doubles the warranty period compared to Amazon, Argos and even Apple itself! With any luck, these earbuds will last a lot longer than two years, but John Lewis means you’ll have an extra 12 months without worry.

For those who have noisy commutes, the AirPods Pro, which boast active noise-cancellation to drone out all outside sounds, have dropped in price too. Usually priced at £239, Amazon has plunged the price down to £185. John Lewis will charge a little more (although still far below the original RRP) but ensure your new buds are protected against faults for an extra year. In other words, it’s exactly the same positives for each of these retailers from above still apply, so choose carefully.

If you’re looking for a new iPhone, Sky Mobile is offering double the mobile data allowance with its iPhone 13 and 13 mini – saving you money every month, while still ensuring that you have enough mobile data that you’ll be able to stream from Spotify, watch a few YouTube videos and answer FaceTime video calls while away from Wi-Fi. And Three has slashed 50% off the monthly bills with its iPhone 13 plan for the first 6 months, making it significantly cheaper than usual. Find all of the best Apple deals below…

Denial of responsibility! TechNewsBoy.com is an automatic aggregator around the global media. All the content are available free on Internet. We have just arranged it in one platform for educational purpose only. In each content, the hyperlink to the primary source is specified. All trademarks belong to their rightful owners, all materials to their authors. If you are the owner of the content and do not want us to publish your materials on our website, please contact us by email – [email protected]. The content will be deleted within 24 hours.
appleApplesBlackDealseventFridaygadget updateiPhone
Share FacebookTwitterGoogle+ReddItWhatsAppPinterestEmail