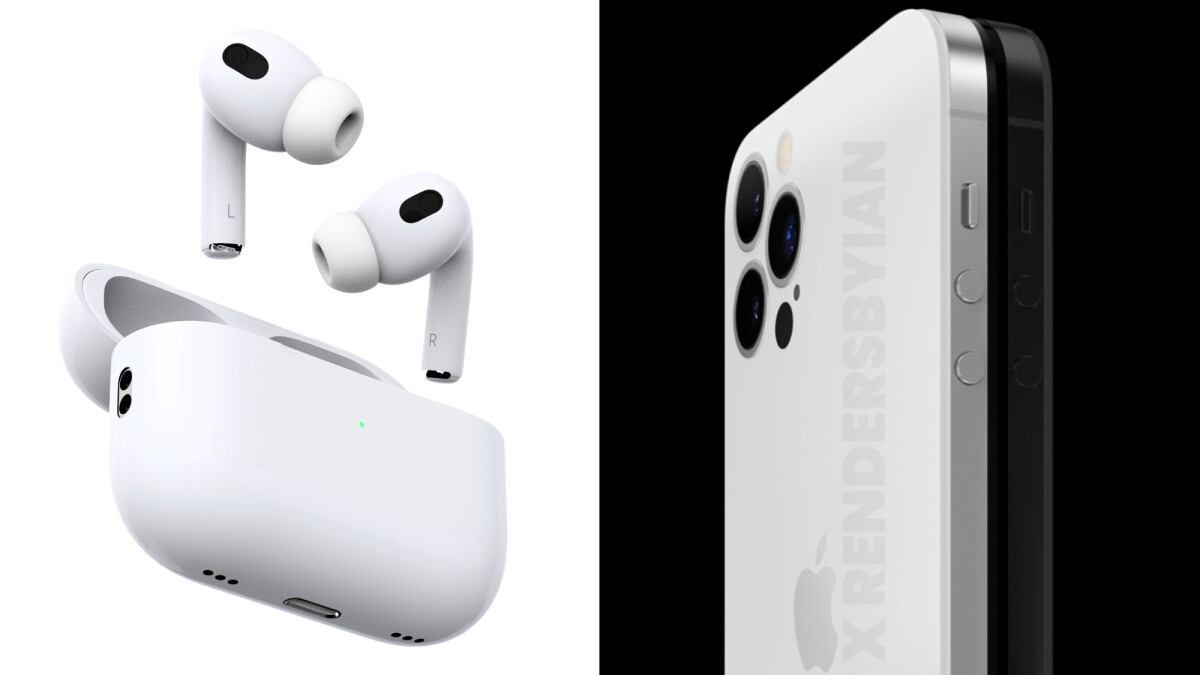 AirPods Pro are now the world’s best-selling earbuds, and there’s a reason for that…

The original AirPods, released in 2016, solved a particular problem that wasn’t exactly “the end of the world”, but certainly annoyed many. I’m talking about the wire twisting and twirling that came with wired earbuds. Wired earbuds. Wired earbuds… Doesn’t it sound scary?Jokes aside, AirPods (or wireless earbuds as a whole) really did change the way we consume audio, and they might be my favorite Apple product ever – I use them daily (alongside my Huawei Freebuds Pro), and as the average Apple user likes to say, they just work.

But it’s now been nearly three years since the release of the first ANC-enabled AirPods Pro, and it seems like it’s time for Apple’s next move in the audio sphere.

After a major 52audio leak of information and images, AirPods Pro 2 are now expected to arrive in Q3-Q4 of 2022, and interestingly enough, they’ll be solving another “cable issue”, by switching to USB-C, and thus marking the beginning of the end of Apple’s beloved Lightning port. Apart from that, they are said to come with a ton of quality-of-life improvements.

So, let’s talk about AirPods Pro 2, Cupertino’s Big Switch to USB-C, and of course… iPhone 15, which is supposed to be the first iPhone with a USB-C port!

AirPods Pro 2: Apple is changing the world through your ears

Notice the speaker holes, which should also be hiding the microphones on the new AirPods Pro 2 case.

Here are the expected AirPods Pro 2 upgrades, according to the 52audio leak:

Of course, what we want from AirPods Pro 2 is a better listening experience since the overall sound quality and ANC on Apple’s tiny earbuds leave a lot to be desired. Don’t get me wrong – they are perfectly adequate for what they are, but there’s room for improvement, and I’m sure Apple recognizes the opportunity for upgrades in terms of audio quality.The good news here is that despite the rumors of stem-less design, AirPods Pro 2 retain the iconic stems that many have come to love. The stems make handling the earbuds more secure but also work as an extension for the microphones, which reach closer to your mouth. They are also pressure-sensitive and let you control your audio.

If I have one gripe with the AirPods Pro when it comes to the stems is that they don’t have capacitive touch support for letting you adjust the volume by swiping up and down. If you’re an AirPods user, this might be the best feature you never had, and it’s why I prefer using my Huawei FreeBuds Pro instead of my AirPods when I can.

The audio experience aside, AirPods Pro 2 are shaping up to bring some very special health and accessibility features. In case you didn’t notice, the new case will have speakers and microphones on the outside.

Their job should be to make finding your lost/misplaced AirPods easier by playing a sound from your iPhone, but also to make the alleged “hearing aid” function work as the microphones should be able to transmit sound to the earphones for sound enhancement. And that’s on top of the rumored heart rate and body temperature monitoring functions.

The new AirPods Pro 2 according to 52audio.

In case you didn’t know, as of autumn 2024, all small and medium-sized portable electronic devices, including mobile phones, tablets, headphones, e-readers, portable gaming consoles and cameras sold in the EU must come with a USB-C charging port. It’s the law.To add insult to injury for Apple’s cable business, USB-C iPhones and other Apple products could become mandatory in the US, too, as (inspired by the EU) the senate is now pushing for the same common charger law that’s about to kick off across the pond by 2024.

But reading about legislation is one thing and seeing some relatively hardcore evidence is another. And that’s exactly what the exclusive 52audio report on the new AirPods 2 Pro gave us – USB-C hopes and dreams that now seem more real than ever!

And if there was a question about what will be the first new Apple product that involuntarily switches to USB-C, and if the iPhone 15 will get there at all (technically, it’ll be released before 2024, so it doesn’t have to), now it all seems surefire.

And in case you’re wondering why Apple decided to kick off the USB-C transition with this fall’s AirPods Pro 2, that’s likely because the company wants to future-proof its best-selling earbuds.

By the looks of it, it seems like Tim Cook & Co will be releasing new AirPods Pro every three years (or at least certainty not every year) which means that if AirPods 2 Pro don’t get USB-C now, Apple’s only chance to get AirPods Pro up to speed with the USB-C mandate will be in 2025 when AirPods Pro 3 should come out. So, that’s Apple’s way of throwing in the towel. No need to fight it anymore. It’s set in stone. Cupertino must go USB-C, and they better do it sooner rather than later.

iPhone 15 now almost certain to get USB-C, but could Apple “go portless”; “what about the planet”; and does USB-C “stifle innovation”?

So, yes, USB-C for AirPods Pro 2 screams “iPhone 15 with USB-C”. It just… makes sense. The new iPad 10th Gen and iPhone 15 should be next in line for the USB-C treatment.But logic aside, reliable insider Ming-Chi Kuo already told us that Apple is testing USB-C for the 2023 iPhone lineup. Moreover, after the EU’s Common Charger Law went forward, and the leaked AirPods Pro 2 with USB-C, it now seems nearly improbable for iPhone 15 to avoid the transition.

What if iPhone 15 is portless?

In case you’re wondering if Apple could go portless and circumvent the EU’s rules, the answer is… probably. However, it doesn’t look like this will be the case…

As of now, MagSafe doesn’t support data transfer, and even if Apple managed to (magically) make that happen, it’ll probably be far less capable than what USB-C 3.1 can do. So, no portless iPhone anytime soon.

And as far as Apple’s favorite environmental argument is concerned, Tim Cook & Co can’t play this card either. Even if Cupertino’s plan was indeed to make the iPhone portless, this would’ve created an immense amount of e-waste due to all the Lightning cables that will have to be thrown away.

And if you’re thinking: “Martin, what about the USB-C transition? It’ll create the same e-waste!”, you wouldn’t be wrong. However, Apple could pulls another one of its favorite cards, which is… The Dongle card. Thus, Cupertino can mitigate the environmental damage in the short-term.

Bloomberg’s reliable tipster Mark Gurman already reported on the possibility of a new Lightning to USB-C adapter that will allow people to keep their Lightning cables around for as long as possible. However, this isn’t a long-term solution, as if the iPhone were to go portless in the future, the dongles would only contribute to more e-waste.

This October, Apple’s proprietary Lightning cable turns 10 years of age, but I don’t think it brought a whole lot of innovation for the time it’s been around… Would you agree?

If history is to repeat itself, Apple might be generous enough to pack a USB-C to Lighting converter in the box of iPhone 15 as they did with the Lightning to 3.5mm headphone jack adapter when iPhone 7 lost its audio port (to courage) back in 2017. However, that’d mean Cupertino would begin losing revenue due to killing off Lightning, which might make Tim Cook & Co hungrier (read: greedier).

As far as Apple’s “USB-C mandate will stifle innovation” argument is concerned, I’m not sure what to make of it. USB-C is already more advanced than Lightning, and Apple seems to admit to that by using the port on its MacBooks and iPads. In fact, in the end, it might turn out that Lightning was holding the iPhone back.

USB-C is and has been the go-to port for years now, but the EU had to force Apple into adopting it, and frankly, I’m glad this is on the way to finally happen! USB-C on iPhone and other Apple products will give users:

So, I’m thrilled that USB-C is coming to AirPods Pro 2 and (hopefully) eventually to the iPhone 15 series. They say that Lightning never strikes twice in the same place, but it turns out that USB-C might! Fingers crossed.

Denial of responsibility! TechNewsBoy.com is an automatic aggregator around the global media. All the content are available free on Internet. We have just arranged it in one platform for educational purpose only. In each content, the hyperlink to the primary source is specified. All trademarks belong to their rightful owners, all materials to their authors. If you are the owner of the content and do not want us to publish your materials on our website, please contact us by email – [email protected]. The content will be deleted within 24 hours.
AirPodsApplesbeginsfollowgadget updateiPhoneplanPro
Share FacebookTwitterGoogle+ReddItWhatsAppPinterestEmail

M series chips are great for Macs, not so much for iPhone 14 and Watch Series 8

You keep at least some of your tech product boxes