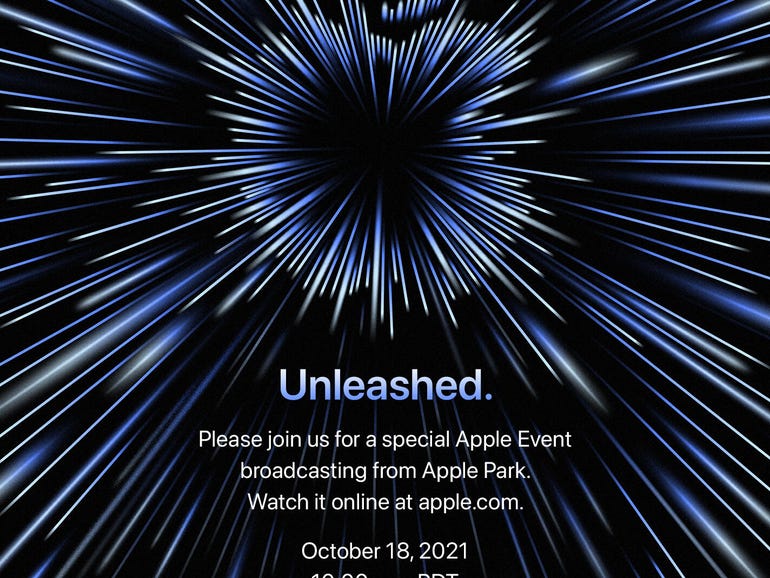 Apple’s Unleashed Mac event: What to expect and how to watch | ZDNet

Apple’s product announcement will take place on Monday, Oct. 18. It’s a rare Monday event for the company, but it’s taking place during an already crowded week of events. On Oct. 19 Google will formally announce the Pixel 6 and Pixel 6 Pro, and then on Oct. 20, Samsung is holding an Unpacked Part 2 event.

The tagline for the event is “Unleashed.” with the invite graphic showing the Apple logo made out of a warp speed or lightspeed-like animation. Presumably, the tagline is in reference to the performance of Apple’s next-generation Apple Silicon processors.

But before I cover what we expect at the event, let’s break down exactly when it’s taking place and how you can watch it.

When is the Apple event?

How to watch the Apple event

Once again, Apple is holding a virtual event that will be streamed from its Apple Park campus.

You can stream the event a number of different ways:

What to expect from Apple’s Unleashed event

The general consensus from analysts and industry experts alike is that Apple has new MacBook Pro models ready to go. The 14-inch and 16-inch MacBook Pros are currently rumored to be powered by a second-generation Apple Silicon processor. In the past, it was rumored that Apple would call the new processor the M1X as a follow-up to the first M1 chip released at the end of 2020. But the name of the chip is up to anyone’s guess.

According to Bloomberg’s Mark Gurman, the MacBook Pros will have a new design — as hinted at by the new 14-inch display size — that will also feature the return of Apple’s MagSafe charger and an HDMI port. There are also reports that the new MacBook Pros will now have a miniLED display with a refresh rate of up to 120Hz.

As for the new Apple Silicon processor, Gurman reports that it will have 10 CPU cores, eight of which are considered high-performance cores. Customers will have a graphics option of 16-cores or 32-cores.

Apple is also readying a high-end Mac Mini, according to Gurman. And it’s possible we’ll see it debut on Oct. 18. The new Mini will use the same processor as the revamped MacBook Pro models.

It would be nice to see Apple bring a new design to the Mac Mini as well. It looks a lot like a bigger Apple TV in its current form, which hasn’t significantly changed in over a decade.

This is one rumor that just won’t die. For every Apple event over the past year, there’s been a report or a rumor that Apple will launch the third-generation entry-level AirPods. The wireless earbuds will supposedly feature a similar design to the AirPods Pro, but with similar features and price to the current standard AirPods.

So will we finally see the AirPods 3 on Oct. 18? Hopefully we do, if for no other reason that this rumor can finally end.

What are you hoping to see Apple announced at its Unleashed event on Oct. 18? Let us know in the comments below.

Denial of responsibility! TechNewsBoy.com is an automatic aggregator around the global media. All the content are available free on Internet. We have just arranged it in one platform for educational purpose only. In each content, the hyperlink to the primary source is specified. All trademarks belong to their rightful owners, all materials to their authors. If you are the owner of the content and do not want us to publish your materials on our website, please contact us by email – [email protected]. The content will be deleted within 24 hours.
Appleseventexpectgadget updateMactech boytech newstech news boy
Share FacebookTwitterGoogle+ReddItWhatsAppPinterestEmail