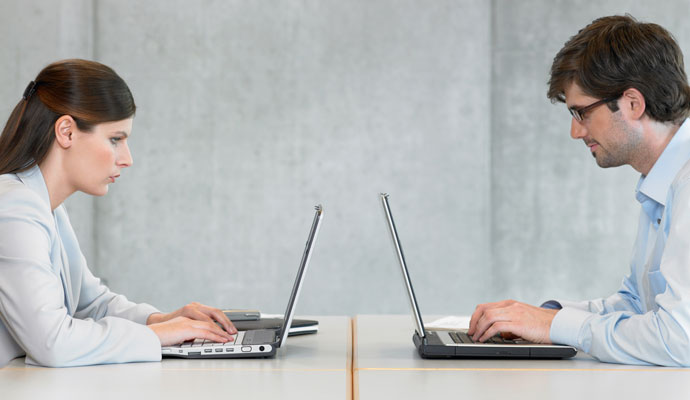 Are we having fun (at work) yet?

Anybody who’s endured a tense Scrabble night with their family or been picked last for the team at school knows that “friendly” competition isn’t always fun and games. What might seem like endless amusement to some can be a source of anxiety to others. Nevertheless, in an effort to boost performance, lighten the mood, or relieve the tedious nature of repetitive work, many managers are introducing game-playing to the workplace, typically in the form of app-based competitions.

This so-called gamification of work has caught on in several fields, including retail, banking, and human resources. It’s been hailed as a way to keep employees more engaged and focused (especially those in younger generations who grew up playing video games). The appeal is obvious: Research shows that job satisfaction is the key to employee happiness and engagement, and engaged workers tend to be dynamic, supportive, and committed at work. Engaged employees also deliver higher-quality customer service and are less likely to quit, which cuts down on organizational turnover costs.

For example, call centers can use an app that translates customer service requests into virtual tickets assigned to employees; individuals or teams then compete according to various performance metrics (such as customer waiting time, average call duration, and number of requests handled) to win prizes. Ideally, employees are motivated to stay on track while improving their customer response rate in real time. See? Everybody wins!

Maybe not, though. A new study casts a pall over this injection of mandatory fun and carries a lesson for managers: The competitive nature of gamification can cause stress and distraction for some employees, decreasing their well-being and driving down their performance. Just as with kids at recess, not everybody wants to play — and, for those who don’t, being forced to take part in office competitions is no fun at all.

The authors conducted their study in three stages: gathering information at firms that use gamification, creating a game of their own for a call center and testing it out, and experimenting with a more complex game in retail settings.

Employees and managers at a pair of leading European telemarketing firms were interviewed. Both companies use games to create short- and long-term sales challenges for frontline employees; each sale earns the employee who made it points on a leaderboard, and the winners get items such as fancy pens or upgraded office equipment — perhaps not glittering prizes, but at least an incentive.

A new study casts a pall over this injection of mandatory fun. The competitive nature of gamification can cause stress and distraction for some employees.

Many employees expressed annoyance or anxiety about having to take part in the games, especially if they perceived the contests as peripheral to their main responsibilities and saw the rewards as minimal. For them, compartmentalizing work and play was an important part of psychological balance. They also disliked the personality clashes that could stem from competition or jealousy.

“When you make a sale, then you must announce it and put it on the board, and the agents who do not make sales, when they see it — either they are demotivated or they want to do the maximum to get there,” one employee said. Sometimes, according to others, the “maximum” involves cheating or taking the game too seriously — not unlike that one family member who hides Scrabble’s Z tiles in their cuffs.

Next, the authors designed their own simple game for a call center, which rewarded the highest-selling agent with lottery tickets. They tracked sales records for the two weeks preceding and following the study. The game had a quantifiable negative impact on employee engagement (in terms of number of calls answered) and performance (number of sales made). Sales dropped by nearly 40 percent in the week after the game. Not exactly the boost to productivity that gamification adherents promise.

The third phase of the study took place at five stores in a worldwide sports-related retail chain. Some employees vied against one another in the same store for the highest number of customers served; in other cases, stores competed against other stores; one location with no contest acted as a control group. The employees then completed a follow-up questionnaire about their attitude toward the game, their willingness to participate, how it affected their relationships with coworkers, and the game’s impact on their interactions with customers.

Overall, employees who took part in the gamified activities were less engaged, and their performance suffered as a result — although employees who were enthusiastic about participating performed slightly better, which reinforces the role of employee consent or willingness as a key factor in workplace contests. This outcome wasn’t a case of certain players being “sore losers,” because whether they finished first or last had little bearing on employees’ attitudes toward the contest.

Some negative effects were offset somewhat by the presence of supportive coworkers. These results suggest that high-quality workplace relationships might be more important to job satisfaction than winning a game.

Across all the studies, a clear theme emerged: Forcing people to play can backfire. To be effective, gamified work should be voluntary, and managers must understand the different personalities in their workforce. The management literature distinguishes between intrinsically motivated employees (who take satisfaction in the job itself and appreciate the flexibility to design their own way of working) and extrinsically driven employees, who are more likely to appreciate the extra reward that comes with winning a contest.

For these reasons, the authors caution against the “blind use or broad implementation” of games at work. “Even if they appear trendy, to be effective, they must fit with and be embodied in the company’s overall culture and strategy,” they write. “They are not magical solutions, and it remains challenging for managers to find the right balance between keeping their employees engaged [and not] adding more stress to their work.”

Indeed, if there are wider problems with the company culture — team conflicts, a silo mentality, or low levels of motivation — gamified work will likely exacerbate them, the authors found. After all, games are supposed to be an escape, whereas work comes with different expectations. Mixing business with pleasure doesn’t work for everyone, and if employees don’t have the choice to opt out, they may resent the gamified work as just another “carrot-and-stick” approach to micromanaging their workflow and monitoring their performance. In which case, everybody loses.

Denial of responsibility! TechNewsBoy.com is an automatic aggregator around the global media. All the content are available free on Internet. We have just arranged it in one platform for educational purpose only. In each content, the hyperlink to the primary source is specified. All trademarks belong to their rightful owners, all materials to their authors. If you are the owner of the content and do not want us to publish your materials on our website, please contact us by email – [email protected]. The content will be deleted within 24 hours.
behavioral sciencecustomer experienceemployee engagementfungadget updategaminginnovationteam management
Share FacebookTwitterGoogle+ReddItWhatsAppPinterestEmail