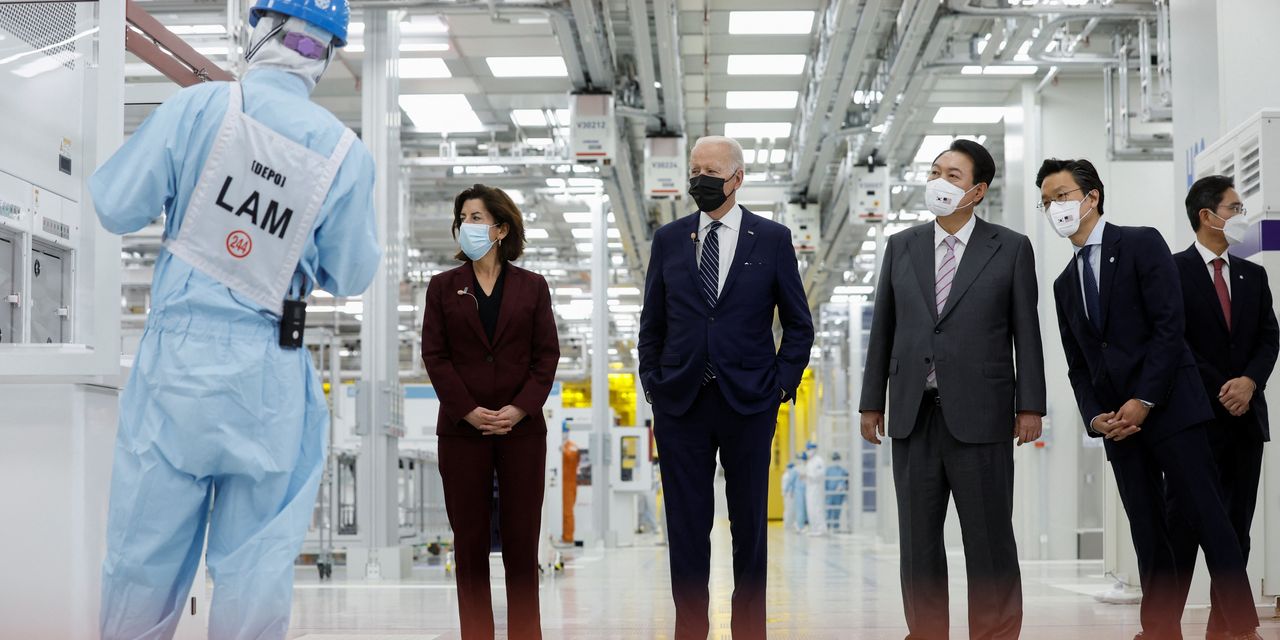 Electronics Co. semiconductor plant, underscoring the technology ties between the countries as the U.S. seeks to strengthen supply chains and reboot its own manufacturing amid competition with China.

“These little chips—only a few nanometers thick—are the key to propelling us into the next era of technological development,” Mr. Biden said on Friday at the plant. He added, ”Our two nations work together to make the best, most advanced technology in the world, and this factory is proof of that.”

Mr. Biden made the case that the U.S. should deepen its business ties with allies such as South Korea to counter “countries that don’t share our values.” Though the president didn’t mention China by name, U.S. officials said one of the goals of the trip was to strengthen alliances in the region to counter Beijing’s influence.

The president toured the facility with South Korean President

-yeol. It was Mr. Biden’s first in-person meeting with the newly elected leader.

The Pyeongtaek plant houses some of Samsung’s most advanced production lines for memory chips and contract chip making and is the largest semiconductor manufacturing site in the world. Last year, Samsung announced plans to build a new $17 billion advanced chip-making factory in Taylor, Texas, adding to its footprint in central Texas where it has long operated a plant in Austin. The White House said the Pyeongtaek plant serves as a model for the new Texas factory.

Mr. Biden has been pushing Congress to pass a broader bill to boost U.S. competitiveness with China that includes about $52 billion in funding for expanding domestic semiconductor production and research and development. The House and the Senate have passed different versions of the legislation and lawmakers are now working on a compromise bill that can win support in both chambers.

South Korea, alongside Japan and Taiwan, is key to U.S. efforts to counter China’s rising technology prowess and maintain an advantage in critical technologies of the future, including semiconductors and batteries. The Asian allies are also essential to building a more resilient supply chain that has been racked by shortages during the pandemic.

are the only two contract chip makers capable of producing the industry’s most cutting-edge semiconductors with the smallest transistors, such as high-end processors, needed to fuel next-generation devices and technologies like artificial intelligence, 5G and high-performance computing.

On Saturday, President Biden is set to attend a state dinner hosted by Mr. Yoon that is expected to include the chiefs of South Korea’s four large business groups, which all operate in industries critical to the U.S. economy, from chips to electric vehicles, telecommunications and batteries.

Georgia officials are expected to announce on Friday that

will build a multibillion-dollar electric vehicle plant in the state, according to a person familiar with that matter. Mr. Biden will meet with the chief of Hyundai Motor Group on Sunday to discuss the new plant, according to the White House.

Following his visit to South Korea, Mr. Biden will travel to Tokyo, where he will hold a meeting with the leaders of Japan, Australia and India, who along with the U.S. make up the Quadrilateral Security Dialogue, or the Quad.

South Korea and Japan hold a shared interest with the U.S. in cooperating on supply chains and in ensuring that sensitive technologies don’t get into the “wrong hands” such as China’s surveillance state, said

senior vice president for economics at the Center for Strategic and International Studies.

The U.S. for decades has depended heavily on China’s manufacturing prowess and its vast supply chain. Over the years, Beijing has spent aggressively through its industrial policies to climb up the value chain, build up key technology sectors and become more self-sufficient.

In electric vehicles, China offered hefty subsidies for car buyers to leapfrog the rest of the world and become the biggest EV market, spurring the rise of domestic car and battery makers.

Mr. Biden and Mr. Yoon toured the Samsung plant for about an hour, escorted by officials including Samsung’s de facto chief Lee Jae-yong. The two presidents signed a silicon wafer—the basic building block of semiconductors—to commemorate the visit, according to Samsung.

The U.S. is pushing allies around the world to reduce China’s dominance of some key supply chains. U.S. Treasury Secretary

on Tuesday called on the U.S. and Europe to band together to foster stronger supply chain partnerships between friendly nations.

“We have become too vulnerable to countries using their market positions in raw materials, technologies, or products to exercise geopolitical leverage or disrupt markets for their own gain,” Ms. Yellen said in a speech in Brussels.

—Chieko Tsuneoka and Yoko Kubota contributed to this article.

Denial of responsibility! TechNewsBoy.com is an automatic aggregator around the global media. All the content are available free on Internet. We have just arranged it in one platform for educational purpose only. In each content, the hyperlink to the primary source is specified. All trademarks belong to their rightful owners, all materials to their authors. If you are the owner of the content and do not want us to publish your materials on our website, please contact us by email – [email protected]. The content will be deleted within 24 hours.
005930.SEalliesAppliancesaudioAudio/Video EquipmentBidencapacityCapacity/Facilities
Share FacebookTwitterGoogle+ReddItWhatsAppPinterestEmail