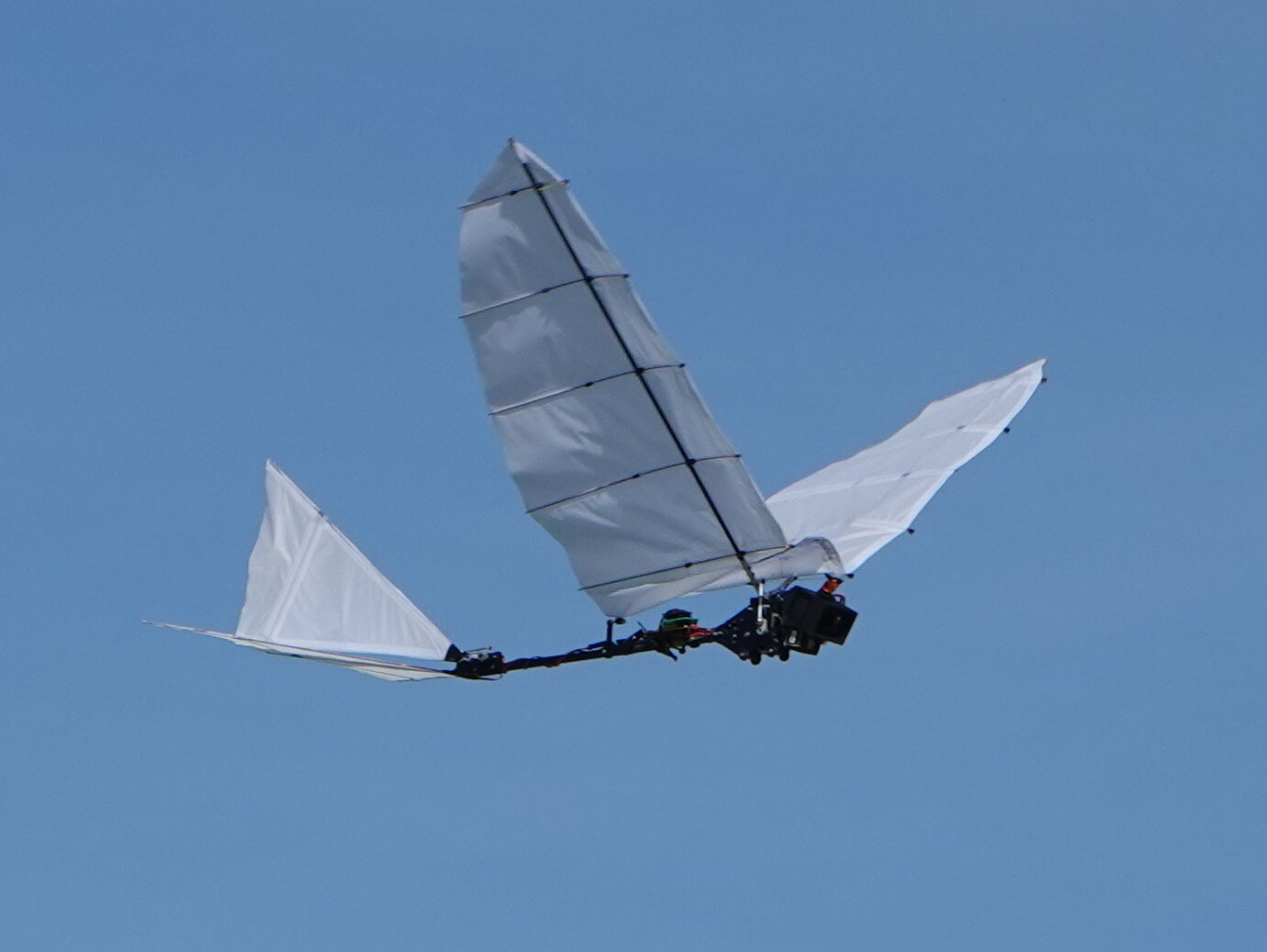 A bird flaps its wings, glides using air currents and then smoothly descends to perch on a pole. But this is not just any bird, it’s a robot bird. And robots like these could in the next decade be used to respond to emergencies or to hunt down drones posing a threat to safety or security.

Uncrewed aerial vehicles (UAVs) are set to form a growing multi-billion dollar industry in the skies in the coming years, with rising potential for a wide range of uses from emergency assistance to drug delivery, home deliveries and precision agriculture.

In line with this, efforts are under way to bolster flight efficiency and the intelligence of UAVs to better navigate built environments. A variety of research groups are drawing their inspiration from nature, often birds—an original inspiration for human flight.

Professor Anibal Ollero, an electrical engineer at the University of Seville in Spain, says standard drones with propellers can currently fly for maybe 20 to 30 minutes, but that the bird-like designs he is working on have the potential to at least double this. “Conventional multirotors are very constrained in terms of time of flight and range,” he said. “We want to increase this range by using the wind and the airflows.”

The GRIFFIN project he leads is seeking to create prototypes of highly autonomous, ultra-lightweight robot birds that can minimise energy in flight, perch on curved surfaces, carry out tasks with moving limbs and artificial beaks, and intelligently interact with people and the environment.

The birds can also carry integrated on-board computers and cameras for visual navigation. “Birds have a very complex body and exhibit complex behaviors. What we are using is the inspiration in the birds to extract relevant features for our robotic ornithopters—aircraft that fly by flapping their wings,” said Prof. Ollero.

To conserve energy, one of the researchers’ aims is to use the wind to enable the robots to soar like birds, combining that with flapping when needed.

Apart from potentially boosting efficiency, Prof. Ollero says a bird-like design has advantages like the ability to reduce noise and improve safety in certain situations because of the absence of propellers and the use of soft, flexible materials like microfibre composites and nylon for the wings and tail.

This means they could be used, for example, to land on injured people and take biometric measurements or put a mask on them in a hazardous environment. “Propellers are not good for this interaction—they can hurt people,” said Prof. Ollero.

Another application is in so-called ‘contact inspection’ in industrial plants, in areas where it may be dangerous for people to work because of the presence of gases. There, a robot could land on a pipe and measure its thickness to detect corrosion.

So far, the team has demonstrated flight with flapping wings both indoors and outdoors, and the ability to land on a small square platform 20 to 30 centimeters wide. The next challenge, which Prof. Ollero says is ‘not trivial,” is to get the birds to perch on curved surfaces such as poles or cables without overbalancing, and then coordinate other functions.

For perching, as well as grasping, the team has been working with materials called shape-memory alloys to create bio-inspired claws that can deform to wrap around a pole—something Prof. Ollero thinks will be possible later this year when combined with machine learning. He also wants to add on-board intelligent sensing of wind to better harness air currents.

Apart from the complexity of coordinating functions, there are some other big challenges to overcome. For one, he says, transitioning between flapping and gliding is difficult, while depending on environmental fluctuations is not always reliable. As lightweight birds with on-board equipment, there are also challenges with the load they can carry—though Prof. Ollero says they had enough capacity to transport things like medicines.

“There is a lot of work to do on the integration of new technologies related to material science, mechanics, aerodynamics and artificial intelligence in our robotic birds,” he added. However, he thinks such birds could be performing practical tasks by 2030.

Visual navigation is another challenge for robot birds, something the project HawkEye is investigating. Its studies into how vision guides flight in birds could potentially translate into more efficient guidance systems for UAVs.

Now, miniaturization has become possible through developments in mobile phone technology, allowing the creation of non-invasive attachable sensors and markers for measuring birds’ head, eye and body movements with what Prof. Taylor describes as ‘sub-millimeter precision.” As a key part of the project, the researchers are using these miniature cameras and motion capture systems to enable 3D reconstructions of what birds see in flight.

His team has been studying how birds use vision in ‘goal-directed behaviors’ including pursuing prey and maneuvering around obstacles.

HawkEye has uncovered different strategies. The team found that peregrine falcons (Falco peregrinus) use visual feedback for guidance in a similar way to visually guided missiles, making them highly efficient for chasing prey moving in a smooth, straight line.

In contrast, a later study found that Harris’s hawks (Parabuteo unicinctus) use a ‘mixed guidance’ strategy to pursue prey through ‘cluttered’ habitats such as desert scrub or trees, improving performance for chasing agile, zigzagging targets.

Aside from the potential to apply this knowledge in navigation systems, it could be harnessed to help flying vehicles intercept drones that pose a threat. Though visually guided systems have been developed for missile interception, blocking drones in the more crowded urban airspace of cities and stadiums poses a new challenge, says Prof. Taylor.

This could gain importance given the expected growth in drones, he says, noting the 2018 drone scare at London’s Gatwick airport that closed the runway for 33 hours and was estimated to have cost airlines tens of millions of euros.

“There is a gap at the moment for anything that’s capable of going in and intercepting something safely. That’s one of the things that birds are extremely good at doing.”

Having observed more than 20,000 flights of hawks, falcons, finches and pigeons, Prof. Taylor says his team has gained a strong understanding of the underlying mechanisms involved in pursuit and obstacle avoidance, as well as perching.

‘(We now have) a really good understanding of how birds are making use of vision to do that effectively in crowded environments,” he said. “It’s taken biomechanics and the study of flight into the era of big data.”

Prof. Taylor adds that despite complex bird behaviors on the surface, there seemed to be a relatively simple underlying mathematical guidance law that captures most of the behaviors HawkEye has analyzed, potentially simplifying the creation of algorithms in UAVs that can then be tweaked for different purposes.

“It gives us a common framework for understanding a whole range of behaviors that might not initially seem closely connected,” he said. “Now that we understand the algorithms, the next step is to start applying those on drones.”

The algorithms could be applied to studying other complex behaviors in nature, says Prof. Taylor, while better knowledge on birds and their vision can help understand how they evolved to deal with different tasks, and help design structures such as buildings and wind turbines with cues to prevent birds from crashing into them.

Enrico Ajanic, a Ph.D. student in robotics at EPFL (the École Polytechnique Fédérale de Lausanne) in Switzerland, who has been working on raptor-inspired drones with artificial feathers, says the different types of drones have different advantages at present—with multirotors being agile but with comparatively low endurance, while winged drones currently tend to have high endurance but low agility.

“There are many lessons we can learn from birds,” he added. “They are highly skilled fliers that can negotiate many different flight regimes—fast, soaring, agile and slow flight, to name a few.”

Ajanic said that apart from raptors, researchers can learn a lot from many different bird species. For example, despite their bad reputation, pigeons are also an excellent model for investigation because they can both reliably navigate in cities and fly long distances efficiently, he says.

But he says there are still many challenges, such as the sensitivity of bird-like drones to wind. There are also many questions to answer to improve both the biological understanding of birds and how this can be applied in drones, including how birds twist their tails when gliding and how to optimize the ability of wings to morph.

“There is still a lot of work to do before we can even approximate the flight abilities of birds,” added Professor Dario Floreano, director of the EPFL Laboratory of Intelligent Systems and Ajanic’s Ph.D. advisor. “Birds do not only fly, but also coordinate with each other, interact and change the environment, and make complex autonomous decisions that our drones can hardly match.”

Yet though he says that drones can generate anxiety and risk of privacy violations, he thinks there are more positive potential impacts than negatives—with bird-inspired UAVs having the opportunity to significantly shape the future of drones.

“Such future drones will play an important role in aiding humanity in search and rescue missions, disaster mitigation or efficient delivery,” said Prof. Floreano. “To successfully complete those missions, they will have to navigate autonomously in complex environments. Thus, the challenges such drones must overcome are very similar to the challenges birds are tackling every day.”

Denial of responsibility! TechNewsBoy.com is an automatic aggregator around the global media. All the content are available free on Internet. We have just arranged it in one platform for educational purpose only. In each content, the hyperlink to the primary source is specified. All trademarks belong to their rightful owners, all materials to their authors. If you are the owner of the content and do not want us to publish your materials on our website, please contact us by email – [email protected]. The content will be deleted within 24 hours.
assistBirdlikedronesemergenciesgadget updatehuntmedicalrobots
Share FacebookTwitterGoogle+ReddItWhatsAppPinterestEmail