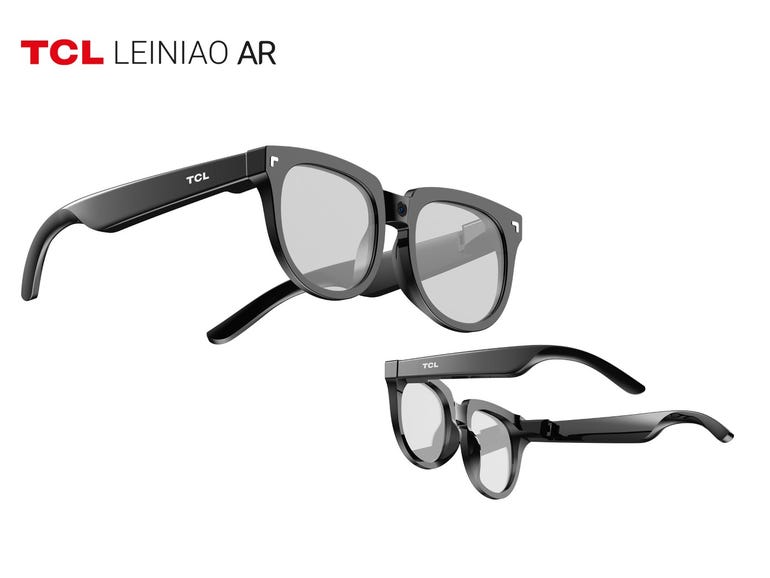 The CTIA did a great job of creating the safest environment possible for CES with a vaccination requirement, free COVID test kits, wide aisles, spaced seating, a facemask requirement, and stickers that let you share your level of desired personal interaction.

It’s now been five days since I returned from trekking miles around the city and show floors, and I don’t even have that typical CES flu that was common in the past.

While several major companies decided not to attend the show, one of the most impressive areas of the show floor was occupied by TCL. The massive, vibrant TVs were stunning, and the home appliances looked pretty slick too.

However, I was focused on mobile technology and was not disappointed as I had the chance to touch, feel, and test new TCL tablets, smartphones, glasses, and its Windows 11 laptop.

There were a couple of pairs of prototype AR glasses in the booth, and my friend Brad Molen offered me the chance to try them out. These black-framed glasses provide a microLED holographic optical augmented reality experience. On the right side of the frame, there is a touch control surface where you can swipe and tap to interact with the content on the display.

The glasses were in demo mode with limited content appearing on the lens, including an image gallery, plots of health and fitness data, messages, a calendar, and more. The images were bright and clear in the glasses, although I did have to hold the glasses at a slight angle to see it clearly due to the fit of the prototype.

As a professional engineer who spends time performing surveys on ships, I definitely see the potential to have AR glasses like this where piping, ventilation, or other shipboard systems are being positioned to fit into an existing vessel. My company is currently investigating other large AR solutions, but a small pair of safety glasses with AR capability would be a great option.

There was no pricing or availability information as this was more of a TCL technology demonstration. However, it was encouraging to see the touch interface work fairly well, and the images appear clear even while looking through the image into the reality around me.

The TCL NXTWEAR Air glasses are clearly designed to serve up a display experience for the user with the glasses connected via USB-C to a smartphone, tablet, computer, or gaming console. This next-generation pair of glasses are fairly light at just 75g, and after watching some video content streaming from a phone, it is clear they would be perfect for my next business trip in an airplane.

The glasses have dual 1080p micro OLED displays and provide an equivalent viewing experience of a 140-inch display that is four meters away. The colors were stunning, and I really did not want to hand them back. There are speakers in the glasses, but you can also connect your own headphones to the video source. These glasses would be a great platform for bone conduction headphones too.

Lens cover options can be quickly and easily added or removed to create different viewing experiences, such as the cover that creates a more immersive experience by blocking out more ambient light. Pricing and availability are not yet available, but it is clear my daily train commute would improve with glasses like this streaming my favorite content.

The TCL NXTPAPER, Tab 8 4G, and Tab 10L were all on display at the show. The NXTPAPER tablet was interesting because it offers a color alternative to Eink with its matte finish display focused on no blue light emission. TCL is known for its display technologies, and the NXTPAPER has a paper-like 10-inch display with support for a passive stylus. The tablet is targeted for online education, reading, and basic tablet tasks. It will be available in Europe and China first, with a US release to be announced.

When I attended a press briefing and heard about the 4G LTE laptop priced at just $349, I figured it must be too cheap to be worth the bother. I spent some time using one at CES, and it is actually quite a nice little laptop powered by a Qualcomm Snapdragon chip and running Windows 11. The hardware is solid with a sizable 14.1-inch display and reported 12-hour battery life. This is clearly a laptop designed for students, but others who don’t have serious processing needs will likely be quite happy with it as well.

As ZDNet’s June Wan reported, TCL also kicked off its 2022 smartphone lineup of announcements with the TCL 30V and TCL XE. These two mid-range phones are coming to Verizon, T-Mobile, and Metro starting next month, so stay tuned for more details and pricing closer to launch.

Last September, TCL put a hold on its Project Chicago foldable phone that had a similar form factor to the
Samsung Galaxy Z Flip 3

. At just under $1,000, Samsung hit the ball out of the park with the Z Flip 3, and TCL couldn’t compete at the time with a price that made sense for the company. TCL has compelling mid-range phones with very reasonable prices and wants to release a foldable phone for the masses.

TCL had a couple of its Project Chicago phones out on display, and I was blown away by how well they worked. The crease on the model I was testing out was much less noticeable than the one on the Z Flip 3 I owned for a month, and TCL did a great job with the hardware. The software seemed to work well too, but it obviously wasn’t a finished product. I am much more hopeful that TCL will be able to release a competitively priced foldable in 2022 after seeing how much it achieved with Project Chicago and look forward to a foldable from the company in the $500 to $600 range.

Denial of responsibility! TechNewsBoy.com is an automatic aggregator around the global media. All the content are available free on Internet. We have just arranged it in one platform for educational purpose only. In each content, the hyperlink to the primary source is specified. All trademarks belong to their rightful owners, all materials to their authors. If you are the owner of the content and do not want us to publish your materials on our website, please contact us by email – [email protected]. The content will be deleted within 24 hours.
AffordableCESgadget updateglasseslaptoptabletsTCLstech boy
Share FacebookTwitterGoogle+ReddItWhatsAppPinterestEmail

Apple unceremoniously removes the Beats Pill Plus from sale

Can Anyone Satisfy Amazon’s Craving for Electric Vans?

Can Anyone Satisfy Amazon’s Craving for Electric Vans?