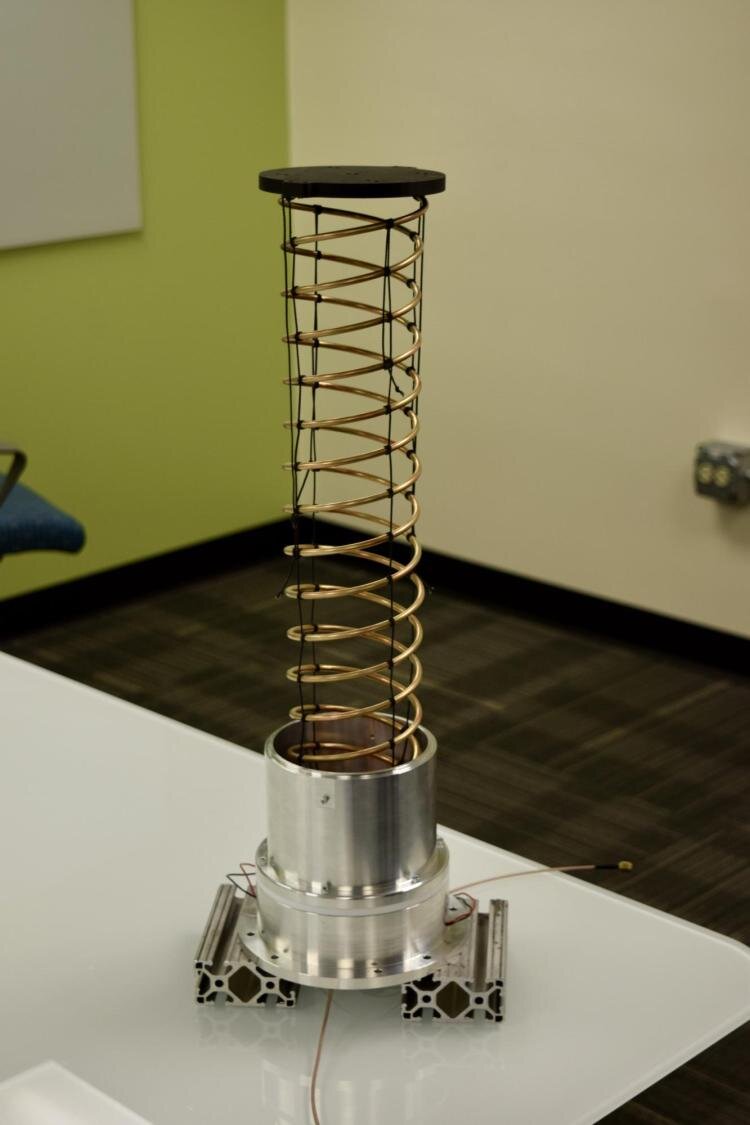 As the space industry evolves its focus from large satellites to smaller ones with the same functionality, there is a growing need for the hardware on board to shrink as well.

A group of mechanical engineering seniors at the University of Colorado Boulder have helped meet that need by designing a compactable antenna that would allow for more powerful radio communications on smaller satellites.

Lockheed Martin Space is sponsoring the project. The team of students from the Paul M. Rady Department of Mechanical Engineering designed and built the prototype for their Senior Design project.

“Our whole team has a passion for the space industry, and we wanted to be a part of the change and innovation that is occurring,” said Gillian Grace Brachoki, the team’s project manager. “We found the push for deployable items in smaller units really interesting.”

The team’s prototype is a deployable helical antenna that starts in a compressed state. Current satellite antenna hardware is fully deployed upon launch. Those systems can be large and not aligned with the industry’s goal for smaller hardware.

“Small satellites and micro-satellites lead to a nimbler industry,” said CAD Engineer Isaac Nagel-Brice. “If you’re developing a satellite over two years instead of a decade, you’re able to get smaller buses up into orbit quicker and at a cheaper cost. That can push innovation and progression on a much faster scale.”

The students designed their antenna to deploy once it is in space—activated by an on-board computer. This would trigger the device’s antenna component to extend four times its compressed height from 3.5 in. to nearly 20 in. for full functionality.

The team accomplished this by designing the antenna with the properties of a mechanical spring, which is an idea the industry has rarely attempted to build before. The students explained that optimizing the prototype to be both a spring and an antenna was difficult to do.

They had to take geometry, material and frequency band all into consideration. The students used spring calculators and high frequency structure simulator software to build an antenna that could stow and deploy with the properties of a mechanical spring.

“The antenna geometry resulted in a powerful spring,” said Nicolas Garzione, one of the electromechanical engineers on the team. “Part of our requirements is that it has to survive the equivalent of an Atlas V launch, which is pretty violent. We spent a lot of time on that restraint mechanism, which is a key part of our project for viability and safety.”

Lockheed Martin Space also required that the prototype needed to be scalable. Therefore, the students designed every part of the deployable antenna to be scaled plus or minus 50%.

The size of the device would also dictate the radiofrequency bands transmitted through the antenna. A larger spring circumference would require higher frequencies.

“I think this prototype could lead to a shift in the industry,” said Nagel-Brice. “Our antenna has some interesting design geometry, but it’s very intentional so that it can be built larger or smaller.”

The students have completed antenna functionality, deployment, mechanical shock and vibration tests on their prototype. The radiofrequency testing was done at First RF, a company specializing in antennas and radiofrequency systems, while the vibration testing happened at Lockheed Martin.

The team said that working with Lockheed Martin Space on this project has been both inspiring and informative. It has allowed the students to combine their mechanical engineering background with new skills they have learned on the job.

“It’s a lot of cutting-edge technology that hasn’t been implemented in this manner until now, thanks to some creative problem solving,” said Systems Engineer Hector Calar. “Shrinking the hardware down means the industry can add more advanced instrumentation, since you have more free space. Freeing up that space on rockets and satellites allows us to do more with the science of engineering.”

The team can now say that they are a part of that push for cutting-edge, compact technology. With their own innovative design assembled into a potentially revolutionary prototype, the students are well on their way to equipping the space industry for greater scientific impacts.

The Senior Design team presented their deployable helical antenna at the College of Engineering and Applied Science Engineering Projects Expo 2022 on April 22.

Provided by
University of Colorado at Boulder

Denial of responsibility! TechNewsBoy.com is an automatic aggregator around the global media. All the content are available free on Internet. We have just arranged it in one platform for educational purpose only. In each content, the hyperlink to the primary source is specified. All trademarks belong to their rightful owners, all materials to their authors. If you are the owner of the content and do not want us to publish your materials on our website, please contact us by email – [email protected]. The content will be deleted within 24 hours.
antennacommunicationsdeployablegadget updatepowerfulprovidesatellitessmaller
Share FacebookTwitterGoogle+ReddItWhatsAppPinterestEmail

Apple, Google, and Microsoft commit to expanded use of passwordless sign-ins