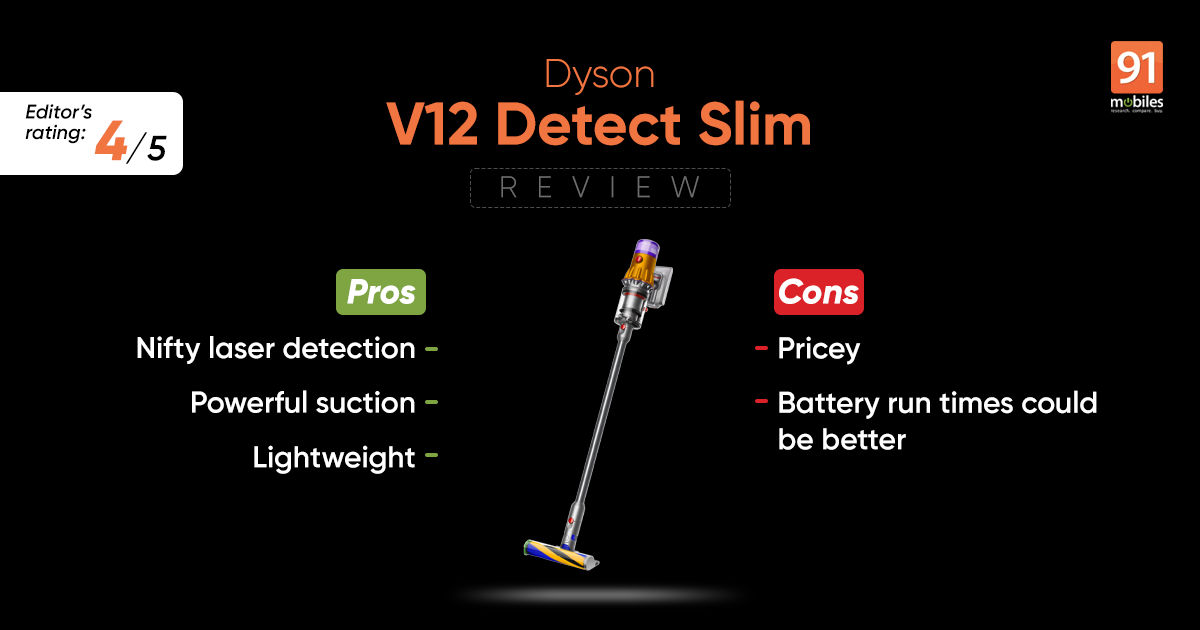 Only Dyson can think of packing its latest vacuum cleaner with lasers. Why you might wonder. Well, because it can. Of course, it’s not really as simple as that, and those lasers do serve a purpose, but the fact is that Dyson’s home appliances are so packed with tech that sometimes it’s difficult not to sit back and marvel at the company’s efforts. The subject of discussion now is the V12 Detect Slim, Dyson’s latest cordless stick vacuum that looks like it has been designed by M for use by Bond, or so it seems.

At first glance, the V12 Detect Slim doesn’t look too different from Dyson’s V11 Absolute Pro. The main unit on the V12 Detect Slim bears the same signature gun shape along with those very distinctive bumps (called Cyclones), though the power button has now moved from the trigger position to the top of the unit. Below that, you’d see the clear bin, with a red latch that allows you to open and empty it in one swift motion. The bin is designed in a way that you don’t need to handle the dust and debris while emptying it, but you might need to do that occasionally when something gets stuck inside.

The battery is removable, which means you could get yourself a spare pack and swap that in when needed. The main unit boasts a 5-stage filtration and claims to capture particles as small as 0.3 microns. The main weapon at its disposal however, is the new Fluffy cleaner head that includes a green laser diode positioned at a 1.5-degree angle, 7.3mm off the ground. As per Dyson, this is the ideal position for it to detect dust particles on the floor. 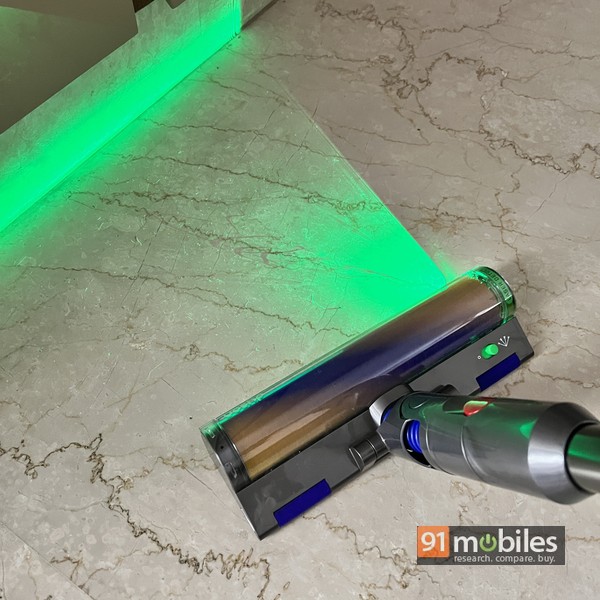 Power it up, and the tool lights up a portion of the floor in front, illuminating tiny dust particles with green laser light… particles that would otherwise have been invisible. That’s not it. Dyson wants you to have proof of the efficacy of its vacuum cleaner, so it went ahead and equipped the device with an acoustic piezo sensor that sizes up and counts the dust particles being sucked in, displaying the details on the screen built-in on the device.

Also quite innovative is the new anti-tangle hair screw tool. This conical brush bar solves a key challenge most vacuum users face – getting rid of hair that gets entangled on the cleaning rollers. Thanks to this new tool’s corkscrew shape though, hair spirals off it and goes directly into the bin. So simple, yet so effective… I wonder why no one else thought of this before. Other than the laser-equipped fluffy cleaner head and the anti-tangle hair screw tool, the package also includes the highly useful and essential crevice tool, an extension wand, a direct drive cleaner head, a combo tool, a soft dusting brush, a hard dusting brush, along with a power adapter and a wall dock as well. It’s a comprehensive portfolio designed to tackle most cleaning requirements at home, though you’d typically find yourself sticking to just two-three of these attachments for a majority of the tasks. 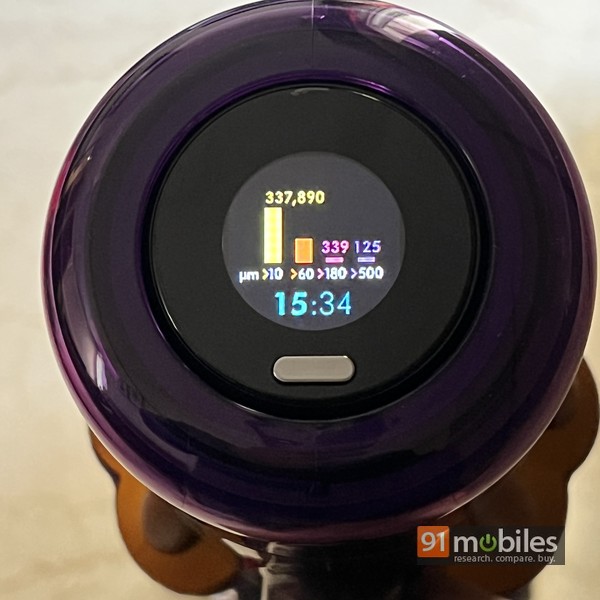 Coming to real-world performance, the Dyson V12 Detect Slim lives up to expectations and is quite an effective cleaner. The laser detection is useful of course, though I found it to be better for highlighting dust and debris when the lighting levels in the room were dim. When in use, the display shows the number of particles sucked in by the device in four different sizes – below 60 microns, 60-180 microns, 180-500 microns and larger than 500 microns. 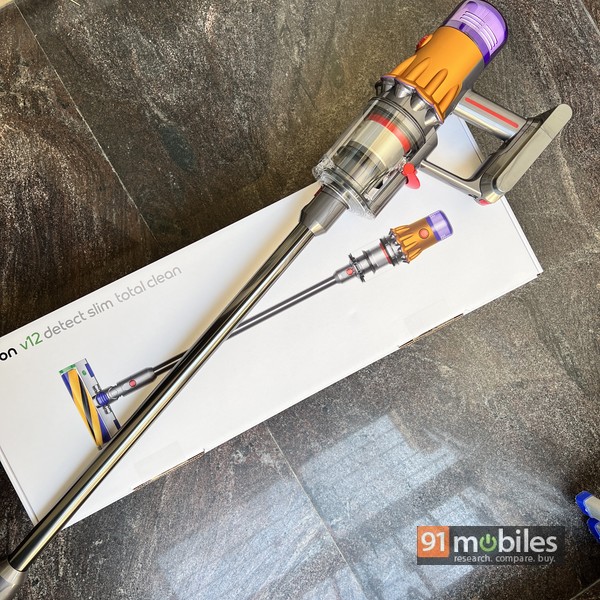 The vacuum offers three modes – eco, normal and boost, and the cleaning power increases as you move up the chain. Battery life is impacted as well of course. The device is rated for an hour’s worth of cleaning in eco mode, about 45 minutes in normal and just about 10-15 minutes in boost mode. Thankfully, you won’t need to use the boss mode much, and while 45 mins in normal mode is ample for cleaning a couple of rooms you might find yourself wanting for more if you have more rooms or a large house to clean at one go. 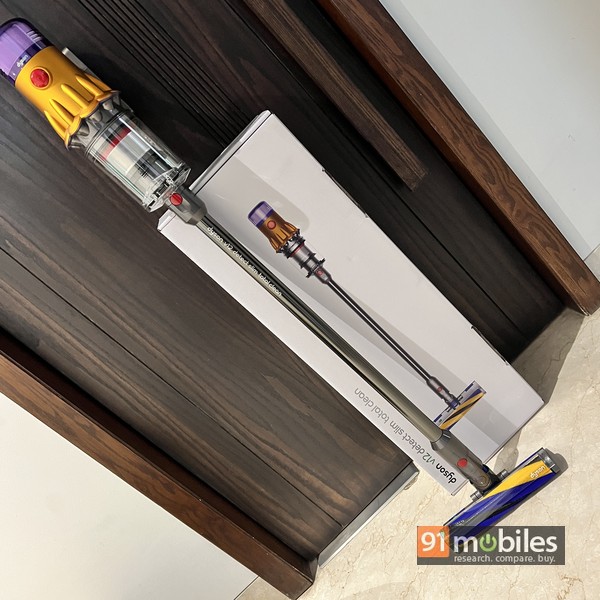 Thanks to its sticker price of Rs 58,900, the Dyson V12 Detect Slim does feel quite pricey. Of course, it’s an effective cleaning tool, and features like laser detection and the piezo sensor are quite cool. That said, whether you’re prepared to spend this much on a vacuum cleaner or go in for any one from the vast plethora of cheaper options available from different brands, has to be your call of course. I can tell you this much though – the Dyson V12 Detect Slim is one of the niftiest home gadgets you can buy… coming, after all, from the same brand that recently introduced a pair of noise-cancelling headphones with a built-in air purifier.

Denial of responsibility! TechNewsBoy.com is an automatic aggregator around the global media. All the content are available free on Internet. We have just arranged it in one platform for educational purpose only. In each content, the hyperlink to the primary source is specified. All trademarks belong to their rightful owners, all materials to their authors. If you are the owner of the content and do not want us to publish your materials on our website, please contact us by email – [email protected]. The content will be deleted within 24 hours.
91mobilescomCleanerconsdetectDysondyson v12 detect slimgadget updatemiscellaneous
Share FacebookTwitterGoogle+ReddItWhatsAppPinterestEmail

How to connect AirPods to PS5

How To Monitor, Control Data Usage on your Android Phone