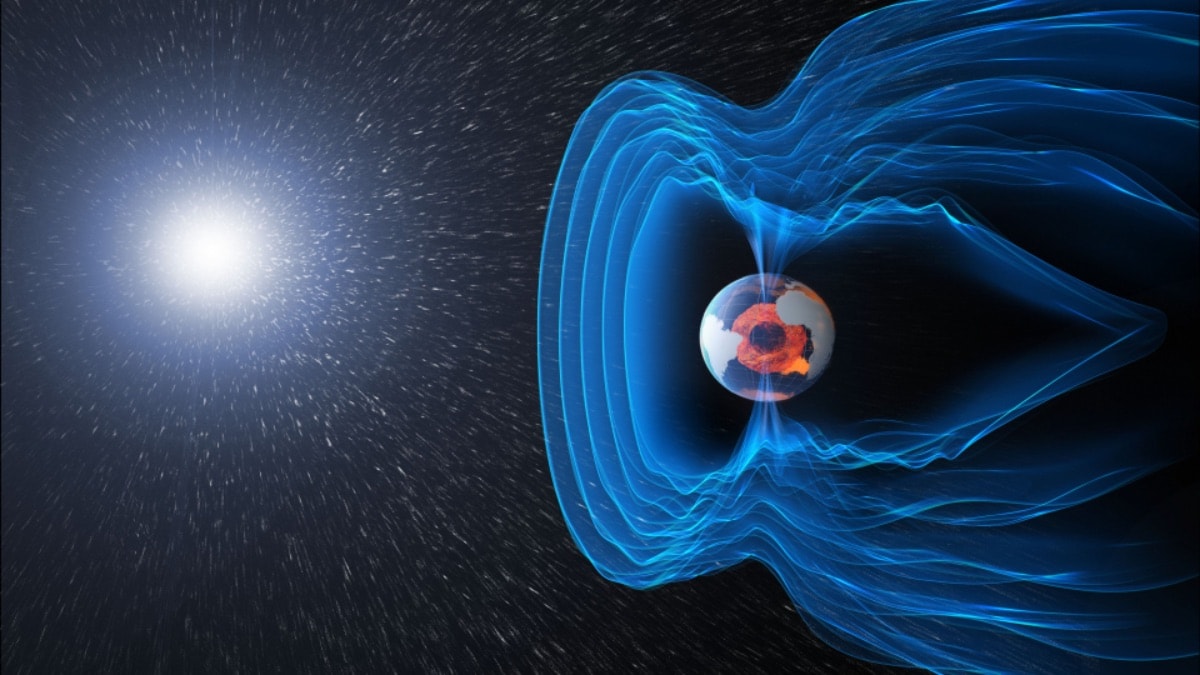 Earth Is Unlikely to Reverse Its Magnetic Polarity, Here’s Why

The discovery of a mysterious region in the South Atlantic, where the geomagnetic field strength is rapidly diminishing, has spurred fears that Earth’s magnetic polarity is about to reverse. However, according to a new study, the current alterations aren’t extraordinary, and a reversal is unlikely. The Earth’s magnetic field acts as a shield and protects the planet from the life-threatening environment that exists in space. However, the magnetic field is not stable, and polarity reversal happens at an interval of every 2,00,000 years, on average. Moreover, the strength of Earth’s magnetic field has declined by around 10 percent over the last 180 years.

Simultaneously, an area with an abnormally weak magnetic field has grown in the South Atlantic, off the coast of South America. Satellites have malfunctioned on multiple occasions as a result of the region’s exposure to highly charged particles from the Sun.

This has sparked suspicion that the Earth is on the verge of a polarity shift. But the new study states that this may not be the case.

The study, which includes data dating back 9,000 years, was published in the journal Proceedings of the National Academy of Sciences.

Andreas Nilsson, a geologist at Lund University, said that anomalies like the one in the South Atlantic are likely periodic phenomena linked to comparable fluctuations in the Earth’s magnetic field strength.

The results are based on examinations of burnt archaeological artefacts and volcanic samples, which provide magnetic field data. These include clay pots that have been baked to above 580 degrees Celsius, solidified volcanic lava, and sediments deposited in lakes or the sea.

These objects act as time capsules, storing data about the previous magnetic field. Using precise instrumentation, the researchers were able to monitor these magnetisations and recreate the direction and strength of the magnetic field at certain locations and times.

By studying how the magnetic field has evolved, researchers can learn more about the fundamental mechanisms that generate it. The new model can also be used to date archaeological and geological documents by comparing oscillations in the magnetic field.

Nilsson added that based on parallels with the reconstructed anomalies, they estimate that the South Atlantic Anomaly will most likely vanish within the next 300 years and that Earth is not on the verge of reversing polarity.

Denial of responsibility! TechNewsBoy.com is an automatic aggregator around the global media. All the content are available free on Internet. We have just arranged it in one platform for educational purpose only. In each content, the hyperlink to the primary source is specified. All trademarks belong to their rightful owners, all materials to their authors. If you are the owner of the content and do not want us to publish your materials on our website, please contact us by email – [email protected]. The content will be deleted within 24 hours.
Earthearth magnetic poles unlikely flip new study earthgadget updateHeresmagneticMagnetic fieldmagnetic polaritynorth pole
Share FacebookTwitterGoogle+ReddItWhatsAppPinterestEmail

Pregnancy Has Risks. Without ‘Roe,’ More People Will Face Them