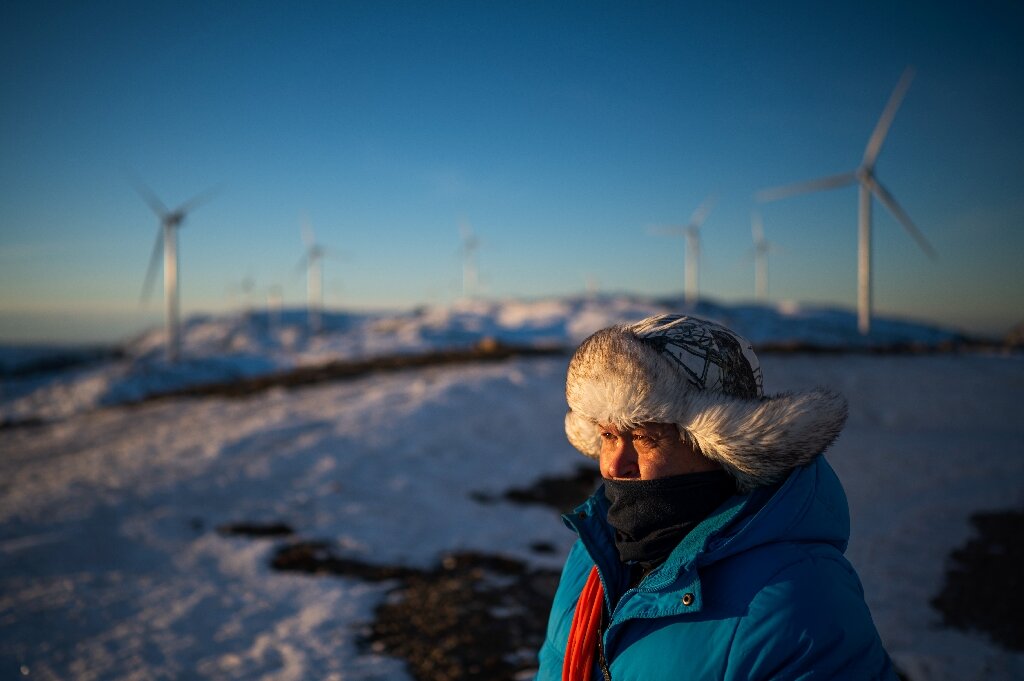 by Pierre-Henry Deshayes With Johannes Ledel In Kiruna, Sweden, and Sam Kingsley In Helsinki

On a gusty mountain crest, the Jama brothers weave between wind turbines that stretch as far as the eye can see, on what used to be their animals’ winter pasture. Climate emergency or not—for these reindeer herders, the turbines have to go.

“Before, the area was perfect for our reindeer. The place was pristine, unspoiled by human activity. Now, everything has been ruined for years to come,” laments Leif Arne, the younger of the brothers, at the wheel of his 4×4.

On both sides of the Arctic polar circle, members of Northern Europe’s Sami minority are vehemently opposing large-scale wind farms and other “green” infrastructure projects, which they say are threatening their livelihoods and encroaching on their ancestral traditions.

A classic tale of David and Goliath—and the Sami may end up winning.

In a groundbreaking verdict in October, Norway’s Supreme Court ruled that two wind farms erected on the Fosen peninsula, in western Norway, violated the rights of six Sami families—including the Jamas—to practise their culture, breaching the UN’s International Covenant on Civil and Political Rights.

With four smaller, neighbouring installations, the two wind farms—Storheia and Roan—make up Europe’s biggest land-based wind park, with a total capacity of 1,057 MW, or enough energy to supply more than 170,000 households.

While the 11 Supreme Court judges unanimously declared invalid the operating permits and expropriation authorisations that paved the way for the construction of the 151 wind turbines, they didn’t say anything about what should happen to the structures now.

For the Jama brothers, whose family has been reindeer herding for generations, there is no doubt about the matter. “These turbines have to be dismantled,” they insist.

They say the Storheia wind park, completed in 2020, deprives them of the best of their three winter grazing grounds, which they use alternatingly.

Reindeer are nomads that roam, depending on the season, to find lichen, their main source of nourishment, especially in winter. If they’re disturbed by the wind turbines, they’ll look elsewhere.

Not a reindeer in sight

With his lasso strapped to his shoulder, elder brother John Kristian scans the vast, snow-blanketed horizon with his binoculars.

Not a reindeer in sight.

“It’s impossible for the reindeer to come here now, with all the enormous disruptions caused by the turning and turning of the turbines, which scare them. And they make so much noise,” he says.

“There are also car parks, roads, crossings… Nature has been completely destroyed here. There’s nothing left but rocks and pebbles,” he adds.

Before the Supreme Court ruling, a lower court had recommended that the loss of the land be compensated financially, to allow herders to buy fodder for their animals.

They rejected that option outright.

“The reindeer have to find their own food. If we give them feed, it’s not traditional herding anymore,” Leif Arne says.

If nothing is done, the lack of grazing grounds means the Jamas will have to reduce their herd size—the number of which they don’t disclose publicly because “that would be like broadcasting how much money you have in the bank.”

At 55, Leif Arne is already struggling to make ends meet.

Reducing his herd would threaten the viability of his operation.

Meanwhile, the turbines continue to spin, despite the court ruling.

“We take the Supreme Court ruling very seriously… We, of course, want to rectify the situation,” insists Torbjorn Steen, spokesman for Fosen Vind, the consortium that operates most of the wind farm.

“The next step is to define operating conditions that guarantee we’re able to operate the wind turbines without violating the herders’ rights or threatening their herding. What we are prioritising now is to have a dialogue with the herders,” he says.

The Norwegian state—the main shareholder in the criticised project through publicly-owned energy group Statkraft—now finds itself in a bind.

How does it respect the legal ruling and protect the Sami’s rights, without compromising its huge economic interests—the six Fosen wind farms cost a total of more than one billion euros—nor slowing down an already sluggish green transition?

Storheia and Roan alone accounted for more than 20 percent of the wind energy produced in Norway in 2020, according to Fosen Vind.

For now, the Petroleum and Energy Ministry, which granted the concessions since declared invalid, has said that more expertise is needed.

“We haven’t decided whether the installations can stay in place in part or in full,” Minister Marte Mjos Persen told AFP.

That has frustrated the Sami, who see the delay as a stalling manoeuvre that allows the turbines to continue to operate, or worse, a way to circumvent the legal ruling.

“The state has to acknowledge that for the past 20 years grave errors have been made, and they can do that by presenting an apology,” said Silje Karine Muotka, the president of the Sameting, Norway’s Sami parliament.

“And concrete actions have to follow: the operating permit has to be cancelled, the turbines have to be fully dismantled, and the area has to be restored, replanted and returned to the herders,” she told AFP.

With every day that passes, Sissel Stormo Holtan, a 40-year-old herder, loses a little more faith in the legal system.

She fought against the Roan wind farm and won—or so she thought.

“Well, nothing has happened even though we won. It feels kind of weird, just starting a new fight all over again and it feels… unfair,” she says, as she feeds fistfuls of lichen to a young orphaned reindeer, now domesticated.

Smiling but annoyed at the same time, she says she’s sick of hearing the authorities talk of a time-consuming “process”.

“The sooner they take them down, the sooner we can use the area again,” she says, before quickly adding: “I don’t see myself using the area. Maybe my daughter or my grandchildren may be able to use it.”

The Sami—formerly known as Lapps, a term now considered pejorative—are an indigenous minority of around 100,000 people that have traditionally lived off reindeer herding and fishing.

Spread out over the northern parts of Norway, Sweden, Finland and Russia, the community has a painful past.

They were subjected to brutal assimilation efforts in the 20th century, and the land they have relied on for generations is today pockmarked by energy, mining and tourism projects.

Before Storheia and Roan, other wind parks were erected on “their” land and some are under construction or set to go up.

Like modern-day Don Quixotes, the Sami are now standing up against windmills. The Sami Parliamentary Council, a cooperation body uniting the community’s parliaments in Norway, Sweden and Finland, demands a form of veto right for future projects.

Any wind farm plan must be approved by local Sami populations and their elected officials, or be suspended, it said in a declaration adopted in January last year.

While it “recognises that climate change is a serious issue that impacts the Sami society”, the Council stressed that “the measures taken to limit climate change must not bear a negative impact on the culture and living conditions of indigenous people.”

According to many observers, the Norwegian Supreme Court ruling could constitute a legal precedent that may affect other infrastructure projects on Sami-populated lands in Norway and neighbouring countries.

“Other companies will have to think twice before starting up a project without having its legality tested first in the courts,” predicted Susanne Normann, a researcher at the Centre for Development and the Environment at the University of Oslo.

The issue is problematic across the Nordic region.

In Finland, which aims to become a world leader in electric battery production, mining projects are causing anguish for the Sami.

In their sights currently are two prospecting permits granted in the tundra near the northwestern village of Enontekio, a region known for its breathtaking vistas and believed to be home to vast mineral deposits.

Alarmed by the environmental harm that mining activities have caused in other parts of Finland, the Sami collected more than 37,000 signatures for a 2020 petition protesting against authorities’ failure to consult local inhabitants or carry out impact studies on how the projects would affect reindeer herding.

Living mainly in the Arctic, a region warming three times faster than the rest of the planet, the Sami are witnessing climate change first-hand.

“For those of us who have lived and worked here all of our lives, we see how the vegetation is changing, the tree line is moving, the permafrost is thawing, we see new species of insects and other plants,” says Matti Blind Berg, a reindeer herder near Kiruna in northern Sweden.

Temperatures fluctuate wildly nowadays, with alternating periods of cold and thaw at times building thick layers of ice on the ground, preventing the reindeer from reaching the lichen they usually dig up under the snow with their hooves.

That has also fuelled fierce competition between herders over grazing grounds.

In this occasionally explosive context, wind parks, copper deposits and rare earth minerals—all highly prized as the global economy turns to electric power—as well as forests planted for biofuels are all putting added pressure on land use.

“I fully understand that we need a green transition, I’m the first to sign on to that,” insists Blind Berg.

“But I find it odd, to say the least, that a green transition should be done at the cost of nature.”

For Susanne Normann, of the Centre for Development and the Environment, climate change is “a double punishment for indigenous people”.

“Not only are they among the people most exposed to climate change, but they also have to pay the price in the form of wind farms and hydroelectric dams built on their territories in the name of the fight against global warming,” she said.

“Where is the justice, when we know that they contribute very little to the problem?”

Denial of responsibility! TechNewsBoy.com is an automatic aggregator around the global media. All the content are available free on Internet. We have just arranged it in one platform for educational purpose only. In each content, the hyperlink to the primary source is specified. All trademarks belong to their rightful owners, all materials to their authors. If you are the owner of the content and do not want us to publish your materials on our website, please contact us by email – [email protected]. The content will be deleted within 24 hours.
Earthgadget updateherdersLaplandredreindeertech boytech news
Share FacebookTwitterGoogle+ReddItWhatsAppPinterestEmail