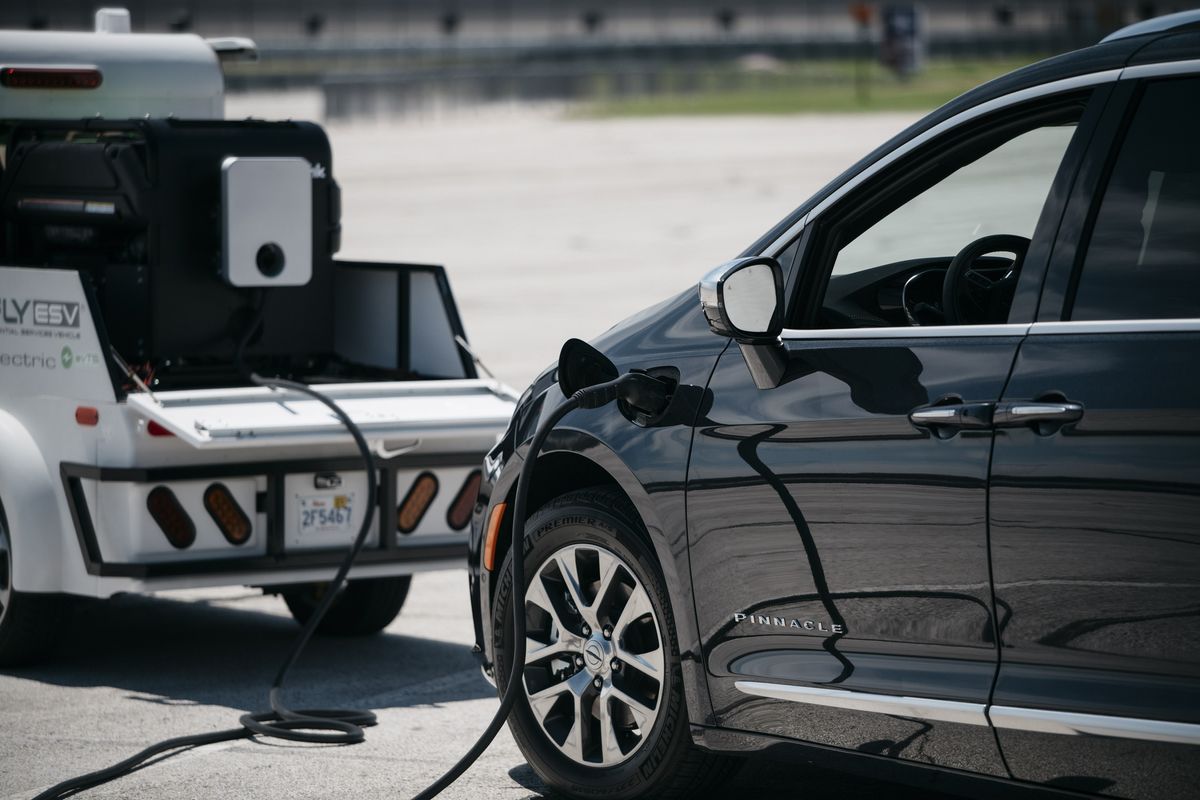 While driving through the streets of Austin, Texas in a Mustang Mach-E, I turned to my husband and told him I felt uneasy. As much as I enjoyed mashing on the accelerator, the battery gauge to my right continued to creep downward, giving me this feeling of nervousness.

I knew exactly what this was: it’s what experts in the EV business call range anxiety. It’s the feeling that the battery might run out before we reach our intended destination. He challenged me to consider whether it’s any more stressful than worrying about a nearly-empty gas tank.

I gave it some thought, but disagreed with his assertion. There’s already a nationwide infrastructure of gas stations if I ever did run out of gas. Plus, a call to AAA could get my tank some fuel. To run out of electricity in the middle of the highway would essentially require an expensive tow. But even then, is my hesitation really founded on any evidence?

“While the image of your EV just dying as the battery runs down to 0% is scary, it virtually never happens in real life,” says John Voelcker, an independent analyst and contributing writer to multiple publications in an interview with Tom’s Guide. “I mean, honestly, when was the last time you ran totally, completely out of gas and your car just died at the side of the road?”

I can’t remember ever running out of gas, although I have shaved the margin thin at times. But I rarely felt worried, as I always had the knowledge that there was a gas station within walking distance. Electric charging stations, less so.

“Range anxiety is a real thing, because even though studies prove that most people drive less than 50 miles in a day, we want to know we can go places on a whim,” says EV Pulse Editor Chad Kirchner in an interview with Tom’s Guide. “In some ways, it’s like owning a watch that’s waterproof for up to 1,000 meters even though the person owning it might not know how to swim.”

Or, for that matter, like people who buy trucks that can tow up to 10,000 pounds when the chances of towing a trailer full of thoroughbreds are nonexistent. It’s nice to have the option.

A few weeks ago, automotive site The Drive asked its readers what it would take for them to buy only EVs. A vast majority of the more than 300 comments said infrastructure and rapid charging were their top criteria. And while most people drive less than 50 miles per day, some were hoping for a range-topping 1,000 miles. The industry is now expanding to meet these needs.

Ford just announced its new all-electric F-150 Lightning, and the automaker revealed that it will be available with either an estimated 230-mile range or an extended battery with a 300-mile range. These range estimates are based on the driver having 1,000 pounds of material in the pickup bed. For fleet managers with short-range trip requirements, that’s more than enough per day.

“We did a lot of research on what range is going to work best for this vehicle and found that people didn’t want to buy more battery than they needed,” says Ford Chief Nameplate Engineer Linda Zhang. “This range is designed to meet the needs of the customer who knows their range every day.”

That may be so, but electrification is only going to increase in popularity from here; the likes of GM, Hyundai and Audi are among those aiming to convert their fleets to electric by 2035. And as more drivers switch to EVs, there will invariably be situations when people are stranded on the side of the road.

Companies like Blink Charging are coming up with creative ways to ease the anxiety surrounding EVs running out of juice in inconvenient places. As one example, recently Blink announced a partnership with Boston-based EV Transportation Services (evTS) to distribute mobile charging stations. Basically, Blink will provide the charging equipment with evTS’ FireFly essential services vehicle; imagine a pickup truck with a massive battery in the back. Together, these two elements provide the electric equivalent service of an AAA driver saving you from the side of the road with a can of gasoline.

It seems this could be the future of roadside assistance for companies like AAA to market services to EV drivers. Fleet vehicles could be fitted with Blink batteries that can flit from vehicle to vehicle within a prescribed distance and offer charge-ups.

Blink Senior VP Sales and Business Development Mike Battaglia believes the confidence level in the public EV infrastructure is growing every day. Blink, which has been around since 2009, is positioned well for the adoption of EVs as a mainstream choice, and not just one for the environmentally-conscious fringe.

“I have spent 15 years in the automotive market, and over time it has become more and more evident that every automaker had a plan to launch EVs,” says Battaglia. “They don’t just whipsaw every four to eight years based on the political market; it’s a long-term strategy.”

Consumer confidence is crucial to the overall success of EV adoption. According to a study conducted by researchers from the University of California-Davis of more than 4,000 plug-in electric vehicle owners, about 20% discontinued ownership, opting for a gas-powered model. What UC Davis discovered was that owners perceived charging to be inconvenient; that was especially true if the owner didn’t have access to level 2 (240-volt) charging at home.

Battaglia envisions the proliferation of charging stations that will bring much more visibility to charging networks across the country.

“The strategy is to install those bases wherever people stop and park for a while, like a mall, gym or restaurant,” Battaglia says. “Psychologically, the customer will be more at ease knowing their car is being charged while they’re engaging in other activities, which is very different than seeking out a gas station and being required to stop and pump.”

As with any tech product, charging is improving on both sides, and it appears that it won’t be long before we are able to juice up much more quickly than we can today.

But the range anxiety I was feeling in the Mach-E should not be dismissed. Even if irrational, that feeling I had will make EV adoption difficult for a mass market audience. But it’s all about perspective. President Biden’s infrastructure spending plan, if passed, would invest $15 billion in charging stations, with the hope of reaching 500,000 by 2030.

Certainly Kirchner feels that customers are still evaluating the EV charging network for what it is now, not what it could be.

“EV charging network is the worst today than it’ll ever be,” he says. “As it grows, and charging speeds increase, range anxiety will be less and less a thing.”

Denial of responsibility! TechNewsBoy.com is an automatic aggregator around the global media. All the content are available free on Internet. We have just arranged it in one platform for educational purpose only. In each content, the hyperlink to the primary source is specified. All trademarks belong to their rightful owners, all materials to their authors. If you are the owner of the content and do not want us to publish your materials on our website, please contact us by email – [email protected]. The content will be deleted within 24 hours.
anxietyBigCarselectricgadget updateproblemrangeSolution
Share FacebookTwitterGoogle+ReddItWhatsAppPinterestEmail

Samsung Galaxy S23 confirmed to debut with a custom “for Galaxy”…

Samsung Galaxy S23 confirmed to debut with a custom…