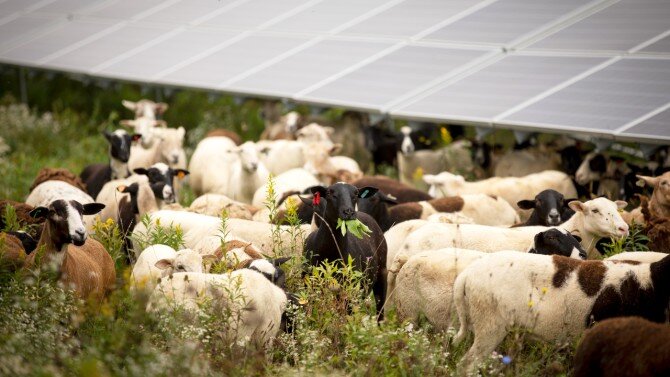 As industrial-sized solar installations pop up throughout New York and New England states, residents fear the loss of agricultural land. One solution is simple: Sheep.

Cornell University associate professor Todd Schmit is partnering with farmers, solar companies and the American Solar Grazing Association, a nonprofit trade group that connects solar companies with shepherds, to explore the economic benefits of a business cooperative or producer-owned organization that could provide coordination and logistical services for farmers grazing under solar arrays.

“This idea complements the goals of reducing fossil fuel use in New York state and throughout the Northeast,” Schmit said. “There are literally thousands of acres going under new solar production, and I think increasing renewable energy production is a great thing, but it’s a little ironic if we’re promoting renewable energy production, and then because we need to control the vegetation, we’re going out there with mowers that are using fossil fuels or spraying it with pesticides that are killing the plants.”

Lexie Hain, a farmer in the Finger Lakes region and executive director of the American Solar Grazing Association, sees this as a boon for shepherds but part of the challenge is coordinating between a few large multinational solar companies and many small farmers.

Schmit believes this problem could be solved by helping farmers create a producer-owned business cooperative that could negotiate contracts and share transportation equipment. Beyond grazing, the project also will explore potential benefits of farmers collectively producing and marketing lamb, including sharing processing equipment and creating a value-added brand for marketing “sheep produced under solar arrays.”

More than half of the lamb and mutton consumed in the U.S. is imported from New Zealand and Australia, so providing more market opportunities for local shepherds would benefit the New York and New England economies, and reduce the carbon footprint of sheep products consumed here.

While Schmit’s three-year, $500,000 project—funded equally by Cornell and the U.S. Department of Agriculture—will focus on New York, Pennsylvania and the New England states, he hopes lessons learned from the project will be useful to sheep farmers throughout the United States.

“Coming to consensus among a potentially disparate group of farmers about their needs and goals for collective action is the first step to new cooperative development, and without it the enterprise cannot move forward,” Schmit said. “As an economist, I think there’s a real opportunity for expansion of the industry, and an opportunity to bring new farmers into production agriculture.”

Denial of responsibility! TechNewsBoy.com is an automatic aggregator around the global media. All the content are available free on Internet. We have just arranged it in one platform for educational purpose only. In each content, the hyperlink to the primary source is specified. All trademarks belong to their rightful owners, all materials to their authors. If you are the owner of the content and do not want us to publish your materials on our website, please contact us by email – [email protected]. The content will be deleted within 24 hours.
arraysClimateeconomyelectricgadget updateGrazingsheepSolar
Share FacebookTwitterGoogle+ReddItWhatsAppPinterestEmail

Employees say passwords are preventing them from doing their jobs

What does HMD need to fix most with its Nokia smartphones?

Employees say passwords are preventing them from doing their…

What does HMD need to fix most with its Nokia smartphones?