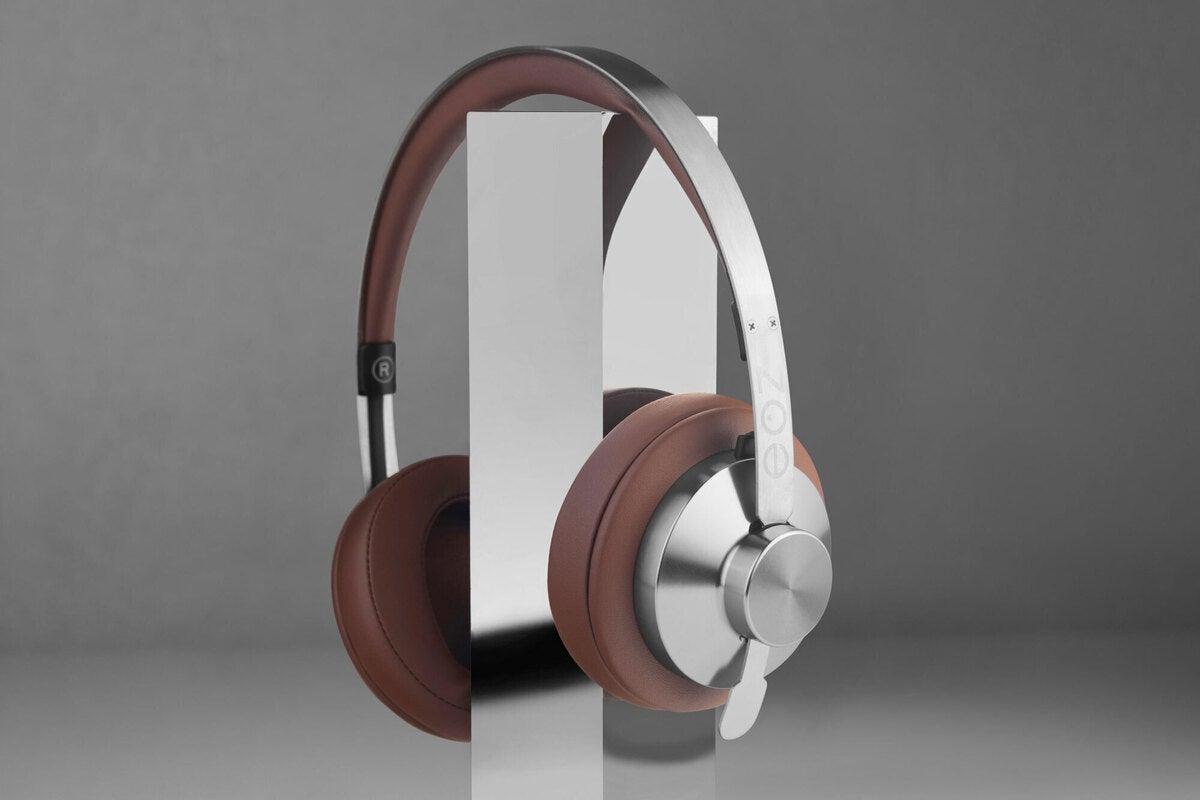 Eoz Audio was founded on the belief that style and technology are not mutually exclusive. As the company website proclaims, “We design our earphones to be as stylish and elegant as they sound…We don’t manufacture, we craft them. We use premium materials because we want our products to last, because we want them to be an expression of our personality and style.”

The company’s latest offering is the Arc wireless Bluetooth headphone. While the build quality and comfort are top notch, I’m afraid the sound quality is not.

This review is part of TechHive’s coverage of the best noise-cancelling headphones,  where you’ll find reviews of the competition’s offerings, plus a buyer’s guide to the features you should consider when shopping for this type of product.

The Eoz Arc is a closed-back, over-ear headphone that certainly lives up to the company’s vision in terms of build materials. The elegant, minimalist earcups and headband are made from stainless steel and aluminum, which makes them far more durable and long-lasting than plastic.

The earcups slide along the single-piece headband to adjust them for your head size. On most other headphones, the earcups are attached to a separate piece that slides in and out of the top of the headband, which is often somewhat awkward and more prone to breakage. On the other hand, the more common design allows the headphones to be folded to fit in a small hard-shell case. The Arc cannot be folded, and it comes with a soft carrying bag, which is not as protective as a hard-shell case.

In another nod to quality materials, the earpads consist of high-density, adaptive memory foam covered in soft “protein leather” that’s actually plant-based—perfect for vegan music lovers! According to Eoz, this synthetic leather looks and feels just like the real thing while being twice as durable. And unlike the more commonly used polyurethane “leather,” it won’t peel off after six months or a year.

Each aluminum earpiece houses a 40mm, graphene-coated diaphragm that is specified to deliver a frequency response from 20Hz to 20kHz (±3 dB). In a gesture of uncharacteristic candor, however, the company sent me a frequency-response graph, which clearly shows the response to be -3dB at 20Hz, -1dB at 40Hz, -6dB at 300Hz, +4dB at 5kHz, and -5dB at 20kHz—the classic “smiley” curve that emphasizes the bass and treble at the expense of the midrange. Other specs include a maximum SPL of about 102dB at 1kHz and THD of about 0.1% at 1kHz.

As a wireless headphone, the primary input is Bluetooth 5.0 with support for the SBC, AAC, aptX, and aptX Low Latency codecs. Onboard microphones let you make and take phone calls and utilize the voice assistant of a paired phone as well. You can also connect the Arc to a hardware headphone output with the included 3.5mm cable connected to the input at the bottom of the right earcup; in this case, it presents an impedance of 160 ohms.

Most Bluetooth headphones include active noise cancellation (ANC), and the Arc is no exception. It does not offer a “transparency mode” that temporarily disables ANC and feeds the mic signal to the headphone so you can hear things like a flight attendant’s instructions.

The battery is said to provide up to 25 hours of play time at moderate volume with Bluetooth on and ANC off, or 15 hours with ANC on. It takes around 60 minutes to fully charge the battery by connecting the USB-C port at the bottom of the left earcup to a 5V/1A USB power source.

In addition to the USB-C charging port, the lower portion of the left earcup holds three buttons: power on/off/Bluetooth pairing, volume up/skip to next track, and volume down/skip to previous track. These buttons are raised and well separated, making them easy to find by feel. Two LEDs indicate power/charging and Bluetooth-pairing status.

As mentioned earlier, there’s a 3.5mm audio jack at the bottom of the right earcup, along with a slider switch that turns ANC on and off.

The Arc is exceedingly comfortable. The protein-leather earpads are very soft, they are large enough for my ears, and the clamping pressure is not bad at all.

When I turned on ANC without music, I heard a lot of hiss, which disappeared when I turned ANC off. I could even hear the hiss during quiet passages of music, which is not good.

Eoz informed me that the company tuned the Arc for use with ANC on, so that’s how I listened to it for most of my testing. When I tried it with ANC off, the sound was quite thin and restrained, so I turned it on and left it there.

For my evaluations, I listened to high-res tracks from Qobuz on my iPhone XS. First up was “What About Us” (24/44.1) from Pink’s album Beautiful Trauma. This is a full-on pop/rock track with lots of bass, which was quite prominent and somewhat boomy on the Arc. Also, things like cymbals were pretty zingy. That “smile” curve is seductive, but I prefer a more tonally balanced sound.

Next, I cued up “Taliat” by Mdou Moctar from Afrique Victime (24/96). African pop uses lots of electric guitar, which is front and center here, accompanied by bass, drums, and vocals. The Arc was pretty heavy on the bass, while the guitar was sharp and crispy.

For some solo guitar, I listened to “Spring Ain’t Here,” a Pat Metheny tune played by John Pizzarelli on his album Better Days Ahead (24/44.1). Once again, the Arc was bass-heavy with some congestion in the low midrange. Also, there seemed to be a smooth veneer over the entire sound.

Turning to jazz, I played “Gettin’ To It” by the Christian McBride Big Band on Bringin’ It (24/96). As before, the Arc emphasized the bass, which was a bit boomy as well, while the horn sections sounded crisp and natural.

I really dig Jon Batiste’s new album We Are, so I listened to “Show Me the Way” (24/44.1), which beautifully channels Marvin Gaye and Earth, Wind, and Fire. The Arc sounded quite bass-heavy, while the rhythm guitar was super-crispy, and the vocal was a bit recessed.

Moving on to country, I played “Happy Anywhere” from Blake Shelton’s Body Language (24/48). As I had come to expect by now, the Arc overemphasized the bass while the vocal was a bit recessed and the steel guitar was quite crisp.

On the classical front, I was delighted to find La Lyre Amoureuse (24/88.2) by Les Sacqueboutiers (The Sackbut Players). I play sackbut (renaissance trombone), so this is right up my alley. I listened to Sonata “La Augustana” by Giovanni Martino Cesare (1621), which is scored for cornetto (a recorder-like instrument with a brass-like mouthpiece), sackbut, organ, and gamba (renaissance fretted cello), and the performance here is amazing. On the Arc, the cornetto and sackbut were nice and natural sounding, but the low organ and gamba were somewhat ill-defined.

Finally, I cued up the fourth movement of Brahms’ Symphony No. 2 in D Major, Op. 73, as recorded by the Tonkünstler Orchester under the direction of Yutaka Sado. The Arc rendered the wide dynamic range well, though as before, the low frequencies were overemphasized, and the basses and timpani were somewhat clouded. Meanwhile, the high woodwinds were too bright.

To test the Arc’s active noise cancelling, I took it into my laundry room and fired up the clothes dryer. Unfortunately, its ANC was not very effective. It cut low-frequency noise somewhat, but not nearly as much as other ANC headphones I’ve tried. Also, the passive isolation with ANC off was not good at all.

During my listening, I compared the Eoz Arc with the Cleer Flow II, which I found to perform extremely well. The Flow II lists for $199.99, though the Cleer website and other retailers have it for $149.99 as of this writing, which makes it almost exactly price comparable to the Arc.

Because the Arc is designed to be used with ANC on, I engaged ANC on the Flow II during my comparisons. Unlike the Arc, the Flow II sounds virtually identical with ANC on or off.

In terms of comfort, the Arc wins hands down; the Flow II’s earcups are too small for my large ears. Also, the Arc seems to be sturdier. In my review of the Flow II, I commented on its good build quality, but since then, the padding has started to separate from the headband, and it doesn’t seem to be replaceable.

Audio quality, however, is an entirely different matter. Without exception, the Flow II’s sound is much better—clearer and cleaner with a better tonal balance. The low frequencies were tighter and in their rightful place, the midrange was more present, and highs were not overly crisp. In general, vocals were more forward than they were on the Arc. On Pink’s “What About Us,” the vocal was a bit sharper—my notes include the word “astringent”—and on “Gettin’ To It” by Christian McBride Big Band, the horns sounded slightly closed in. The same was true of the cornetto and sackbut on Sonata “La Augustana,” though in both cases, the effect was minor.

With the dryer running in the laundry room, the Flow II’s ANC was far more effective than the Arc’s. It greatly reduced the low frequencies and midrange, and even reduced higher frequencies to some extent as well.

When you turn off ANC on the Flow II, it engages ambient mode, which pipes ambient sound through the onboard microphones into the headphones; it has no entirely passive mode. So, I turned off the power to see how much passive isolation it provides—and it provides a lot more isolation than the Arc.

The build quality and comfort of the Eoz Arc are impressive, but they cannot rescue this headphone from mediocre audio performance. In general, the bass and treble are overemphasized, while the midrange is recessed by comparison. This so-called “smiley curve” might be seductive to some, but its appeal will likely wear off quickly. Also, the bass and low midrange tend toward some congestion.

Then there’s the ANC, which is not very effective at reducing ambient noise levels. In addition, it produces a hiss that is audible during quiet passages.

At $139, the Eoz Arc isn’t terribly expensive. But for not much more, the Cleer Flow II sounds a lot better, and its ANC is far more effective. Granted, the Flow II’s earpads are not as comfortable, at least on my large ears, and its build quality doesn’t seem to match the Arc, but in terms of audio quality, it beats the Arc hands down.

Denial of responsibility! TechNewsBoy.com is an automatic aggregator around the global media. All the content are available free on Internet. We have just arranged it in one platform for educational purpose only. In each content, the hyperlink to the primary source is specified. All trademarks belong to their rightful owners, all materials to their authors. If you are the owner of the content and do not want us to publish your materials on our website, please contact us by email – [email protected]. The content will be deleted within 24 hours.
ANCArcaudiocomfortEozgadget updateheadphonemediocre
Share FacebookTwitterGoogle+ReddItWhatsAppPinterestEmail

Buffalo gunman’s video is surfacing on Facebook, sometimes with ads…

Why some scientists want serious research into UFOs

Zoom adds a bunch of fun features because you don’t…