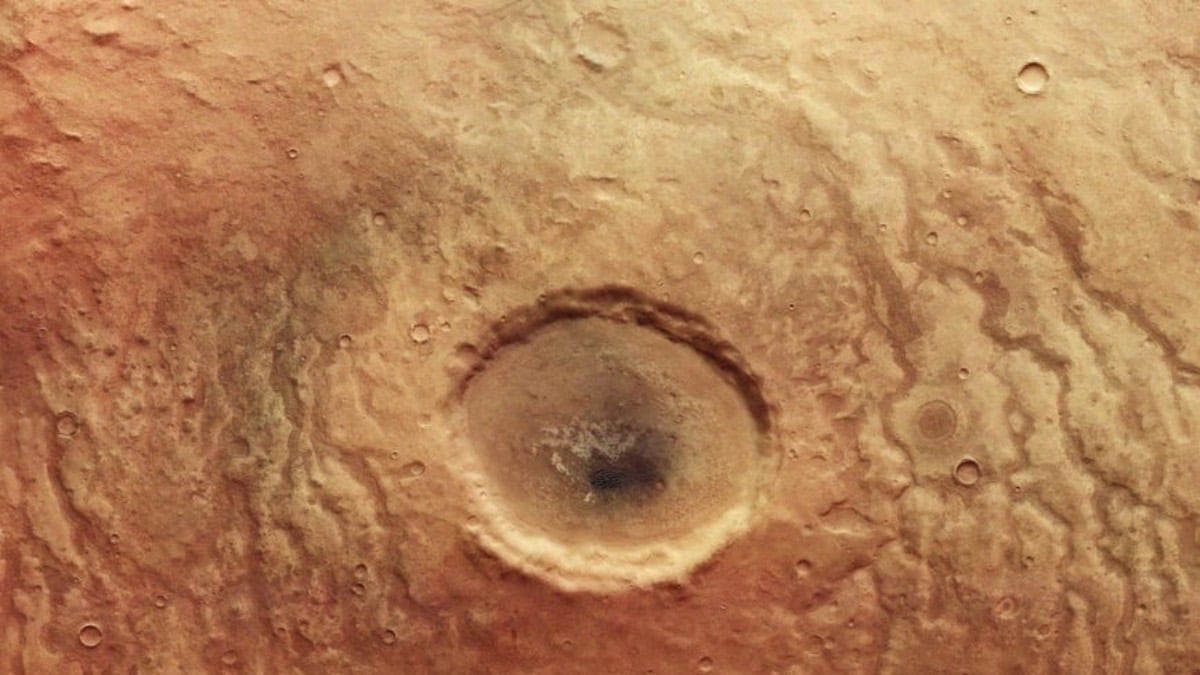 In late April, the European Space Agency’s Mars Express mission captured an image of Aonia Terra, a crater-filled region in the Red Planet’s southern hemisphere. So, what’s special about these photographs? Well, one of the images shows a crater encircled by winding channels. A closer look would suggest that the image looks eerily like a human eyeball. However, the objective of the massive eye-gazing image of the crater, which measures 30 kilometres across, is not to give readers cosmic goosebumps. It’s to assist them in understanding the geology and history of Mars in a better way.

Massive impacts are assumed to have carved out the craters in the region about 4 billion years ago, during the Late Heavy Bombardment, a tumultuous time in the early solar system.

The ESA issued a statement a few days ago that sounded like it was planning to write a science fiction horror film. The statement was titled Mars Sleeps With One Eye Open. In the statement, the ESA added that the crater’s winding channels were likely conduits for liquid water 3.5 to 4 billion years ago.

About Aonia Terra, the ESA said, “This scarred and colourful (by martian standards!) landscape shows part of, an upland region in the southern highlands of Mars. The image was taken by ESA’s Mars Express on April 25.”

The channels appear to be partially filled with a dark material, and they seem to be raised above the surrounding land in certain spots. When water ran through the channels, erosion-resistant sediment may have collected at the bottom. Alternatively, the canals could have been filled in by lava later in Mars’ history.

An image like this may offer a lot of information. For example, geologic hints can be found in the various colours and shapes in the image.

It’s possible that this area of Mars is made up of many components. The surface is warm red south of the crater, dissolving into a deeper brownish-grey closer to the crater. Many hills can be seen in this area. These flat-topped rock towers are formed when land is progressively eroded away by water, wind, or ice.

A black dune field stands on a lighter surface inside the crater. A closer study reveals that the crater is surrounded by numerous buttes and cone-shaped hills.

Since 2003, the Mars Express spacecraft has been orbiting the Red Planet, photographing its surface, mapping its minerals, and determining the composition of its tenuous atmosphere.

Denial of responsibility! TechNewsBoy.com is an automatic aggregator around the global media. All the content are available free on Internet. We have just arranged it in one platform for educational purpose only. In each content, the hyperlink to the primary source is specified. All trademarks belong to their rightful owners, all materials to their authors. If you are the owner of the content and do not want us to publish your materials on our website, please contact us by email – [email protected]. The content will be deleted within 24 hours.
capturesCrateresaesa mars express mission crater red planet human eye resemblance marsESAseuropean space agencyExpresseye
Share FacebookTwitterGoogle+ReddItWhatsAppPinterestEmail

Poco F4 5G to Sport Up to 12GB RAM; Price in India Leaked