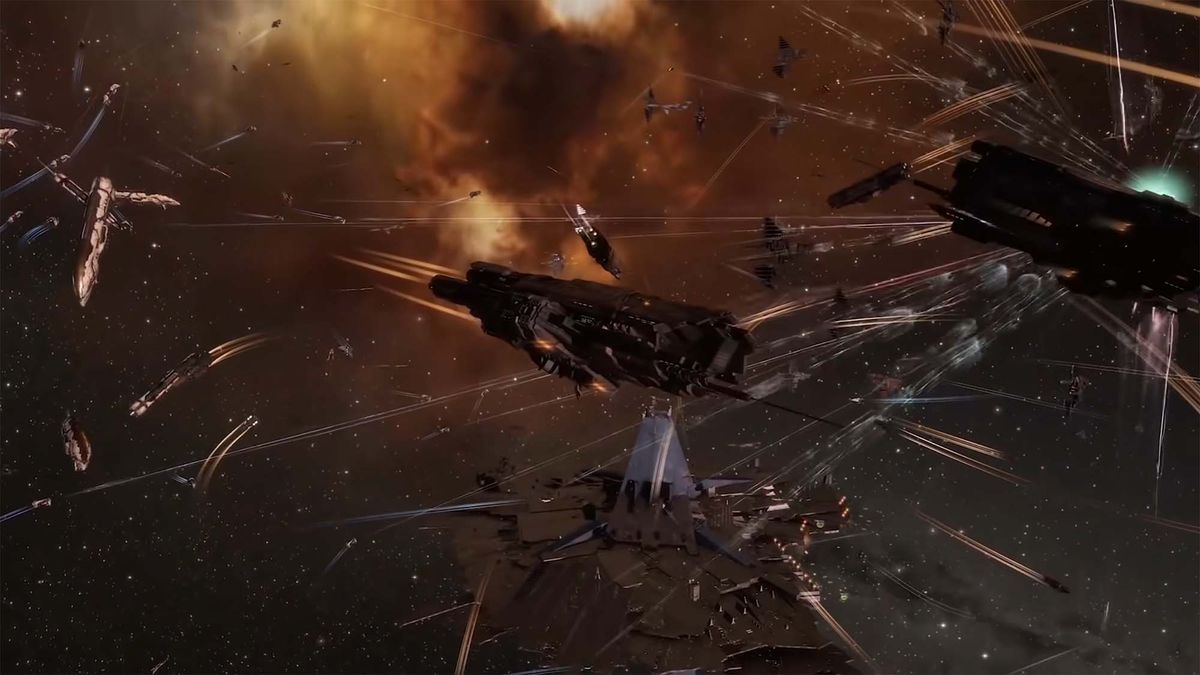 When it comes to PC gaming, not a lot of people are going to think about a Mac.

That wasn’t always the case. If you’re a gamer of a certain age, chances are good that your first experience with PC gaming was on an Apple II computer in your school’s computer lab.

There was also a time when Apple was on the cutting edge of PC gaming when Myst debuted in 1993 on the Apple Macintosh computer and became the best-selling game ever until it was dethroned in 2002 by The Sims.

Despite this pedigree, there’s no doubt that something happened along the way and Apple lost its gaming moj, surrendering the PC gaming space almost entirely to Windows PCs and gaming consoles, while it directed its attention elsewhere.

It’s hard to argue with Apple’s decision. It recently became the first company to achieve $3 trillion in market capitalization, so it has clearly done something right. But for a company that almost became the exclusive platform for Bungie’s Halo in 1999, Mac gaming has remained something of a sparsely-inhabited desert in the new millennium.

That may be about to change, however, and the developers of the hugely-successful EVE Online hope that they will be in the vanguard of a new Mac gaming frontier.

“We have a long and interesting history with Apple,” Bergur Finnbogason, the creative director of EVE Online, told TechRadar recently. “We’ve supported Apple hardware, we’ve been on iOS for quite some time, and so we’ve had a dedicated [Apple] following for a very long time now.”

Recently, the company released its first native Mac client, specially optimized for the Apple M1 chip. In the process, it has become something of an evangelist for the Mac as a gaming platform, something that some PC gamers might consider heresy.

Gaming on a Mac, past and present

Given the history of Mac gaming and the trajectory Apple has followed since the 1990s, one has to ask, “What the hell happened?”

“It was never a single moment, really, it was a combination of a lot of little things that created this drift,” Finnbogason said. “When people were playing Full Throttle, it was the coolest game ever. Nobody had ever seen anything as beautiful as Myst. It was spectacular.”

“[An Apple computer] became office equipment, it became professional equipment. It felt in many ways that they were going the Silicon Graphics route. Windows felt way more open. Anyone could learn some BASIC, or QBASIC, or whatever and you could write yourself a game.”

Recently, though, Apple’s approach to gaming has changed.

“I think it’s changing because of iPhone games,” Hilmar V. Petursson, CEO of CCP Games, said. “Gaming has become such a huge part of what people use iPhones for, and it has probably really changed the way Apple sees gaming.

“And now,” he added, “Macs have the hardware to back it up.”

One of the biggest issues with Macs and gaming has been the hardware. While Macs have been powerful for the use cases they have been designed for, gaming wasn’t one of them. As a result, the hardware often fell short of what was needed.

With a Windows PC, you have a lot more capability to create a “Frankenstein machine” as Finnbogason calls them, with all kinds of different hardware configurations that make PC gaming on Windows much more powerful.

And since the most powerful gaming hardware has been on a Windows PC, most PC gamers have flocked to Windows as a gaming platform. With most gamers on Windows (not counting console gamers, of course), most games are published on that platform, as well.

What’s more, producing a game as complex as EVE Online isn’t an easy task even for a Windows PC, much less building a wholly separate native Mac client.

“For the past few years we’ve been running EVE through a live client,” Finnbogason said, “so not the most optimal way of operating. I don’t want to say it was a side project, but we weren’t really giving it the love it deserved. So when we decided to kind of double down and take the full step of going native on Mac, that really opened up a lot of new possibilities.

It wasn’t without its challenges, though. Developing within the Metal framework, Apple’s answer to Microsoft’s DirectX multimedia programming API, required a lot of work for a game that’s accumulated nearly two decades of Windows development quirks and artifacts under the hood.

“It was a pretty magnificent feat for us,” Finnbogason said. “One of the first things we had to do was really look at our core architecture and how we developed the game. We had to take the game from 32-bit to 64-bit. There was a lot of just cleanup of old, fantastic ideas [in the code] that were probably the best ideas at the moment they were made, but the game is 18 years old, so there’s been 18 years of development, 18 years of progress in the world. It sometimes catches up to you.”

Still, CCP developers found that the process wasn’t as perilous as they expected.

“But this process was way smoother than I’d even dared to predict when we started this project,” Finnbogason said.

We’ve done this because we’ve had a Mac client for the longest time and there’s been a lot of love from Apple on EVE,” Petursson said. “There are a lot of people at Apple that are EVE players, and a lot of people at CCP that are Mac users. So that’s definitely been part of our motivation, and the user base that uses a Mac is a healthy number.”

Perhaps most important of all, though, is Apple’s move to its own silicon.

“The M1 really, really, really changes the situation. It is a really powerful piece of kit and there’s more to come, based on rumors and whatnot and reading the tea leaves. Other studios, absolutely, should update their worldview on the capabilities of the Mac.”

The Apple M1 chip has been a huge win for the company, and the M1 Pro and M1 Max chips have only further cemented the capabilities of Apple’s new hardware. The M1 Max, in particular, is a beast of an SoC with up to a 32-core GPU, 64GB of unified memory, and 400GB/s of memory bandwidth that delivers about 10.4 TFLOPS of performance, according to Apple. The M1 chip, meanwhile, delivers about 2.6 TFLOPS out of its 8-core GPU.

This is a far cry from the nearly 19 TFLOPS of the RTX 3080 mobile GPU running in your standard high-end gaming laptop. In our experience, the M1 Max 32-core chip manages to come in at roughly the same gaming performance as a discrete RTX 3060 GPU, which is pretty impressive given that we’re essentially talking about integrated graphics here.

But at about $3,500 for a MacBook Pro with an M1 Max chip, one wonders if that kind of performance is enough to entice gamers away from a Razer or Alienware gaming laptop.

The hardcore gamer set will almost certainly stick with their dedicated gaming laptops, but there is definitely room for Apple to regain some of its long surrendered territory in the PC gaming space, particularly with an actual, you know, laptop.

“The laptops in particular are a game changer,” Petursson said. “Like, you can play EVE Online on an M1 Mac for hours on end on battery, and nothing really compares on that front. You can’t really do that on any other laptop but an M1 laptop, and that is a fundamental game-changer to how you can play EVE Online. Playing on a battery was kind of science fiction before the M1.”

That isn’t chalked up to the hardware alone, obviously. EVE Online’s native Mac client was specifically optimized for the Apple M1 chip, so it runs especially well on this hardware compared to other games.

“It’s definitely a testament to the great work that the team did on the Metal rendering path [for the Mac client],” Petursson said.

What will need to change for Mac gaming to see a real resurgence?

If you talk to any PC gamer out there and ask what they’d need to see before they’d game on a Mac, you’re likely to hear two things: better hardware and a better catalog of games.

While the M1 chip and its beefier siblings, the M1 Pro and M1 Max, have definitely improved things on the hardware front, and later generations of chips should improve matters even further, the real issue is the catalog of available games.

This really has been Apple’s Achilles heel for a little over two decades and it remains so to a large extent, but an impressive number of the best Steam games out there have Mac versions now.

And while something like Dying Light 2 might not release to macOS in the next year or two, it’s a lot harder to dismiss the possibility of major AAA games releasing to macOS upon release in the years ahead given the substantial improvements in hardware.

This is something that Apple only has so much control over, and it will likely require a sea change in terms of developers’ perspective of a Mac’s gaming capabilities. CCP Games hopes it can help promote that shift in perspective.

“I think people have largely been in this camp of Macs and games not being a match made in heaven, but people should update their worldview,” Petursson said. “We’ve seen a great benefit from doing this, and I think we will continue to reap the benefits for a long time to come.”

Denial of responsibility! TechNewsBoy.com is an automatic aggregator around the global media. All the content are available free on Internet. We have just arranged it in one platform for educational purpose only. In each content, the hyperlink to the primary source is specified. All trademarks belong to their rightful owners, all materials to their authors. If you are the owner of the content and do not want us to publish your materials on our website, please contact us by email – [email protected]. The content will be deleted within 24 hours.
bullishdevelopersEvegadget updategamingMacOnlinetech boy
Share FacebookTwitterGoogle+ReddItWhatsAppPinterestEmail

A ‘Potentially Hazardous’ Asteroid Will Fly by Earth Soon: How to Watch It