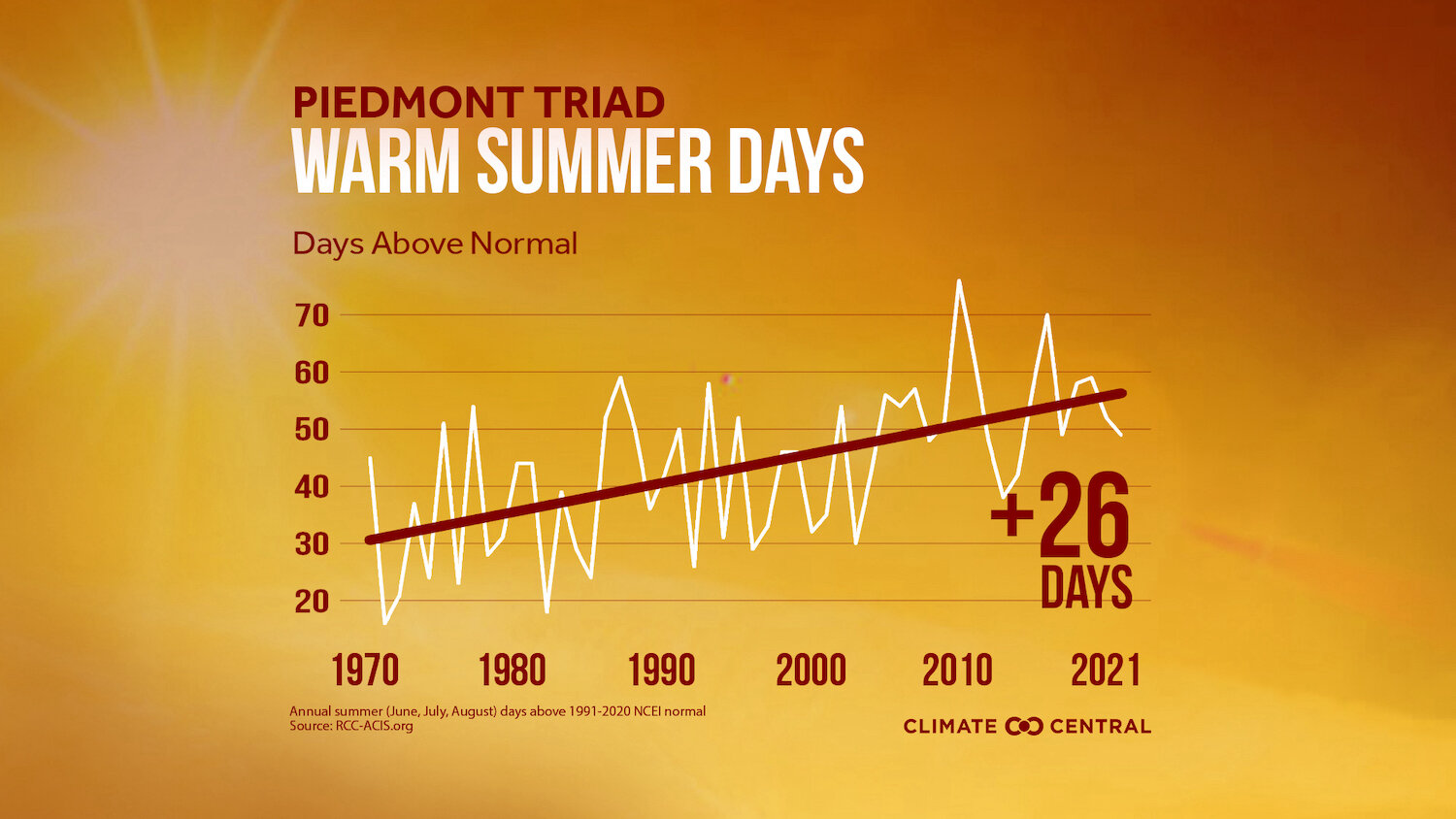 The announcement comes at a time when heat waves are sweeping across the United States, triggering power outages in several parts of the country due to increased demand for electricity.

“Extreme heat causes a surge in demand because everyone is using air conditioning to stay cool,” said Jordan Kern, an assistant professor of forestry and environmental resources at NC State.

A heat wave is a period of abnormally hot weather that typically lasts two or more days.

Kern, who conducts vulnerability assessments of power grids, added that extreme heat can overwhelm transmission lines and even cause them to sag—a result of the metal inside them expanding.

These factors, coupled with surging demand, can lead to partial outages and rolling blackouts—when a utility company temporarily shuts down power for different areas to keep the grid from overloading.

Unfortunately, power grids across the country will face even more demand for electricity in the coming decades as climate change is extending the summer season and making heat waves more frequent and intense.

Research shows that summers in the U.S. and other parts of the Northern Hemisphere could last nearly six months by the year 2100 if greenhouse gas emissions continue unchecked.

It’s also well established that summer temperatures are increasing, with the number of annual heat waves in the U.S. increasing from two per year in the 1960s to six per year during the 2010s.

A report from the North Carolina Institute for Climate Studies projects that the state’s annual average temperature could increase from 2 to 10 degrees Fahrenheit by 2100, depending on greenhouse gas emissions.

The average summer temperatures for the Triad region alone have already increased by nearly 3 degrees Fahrenheit since 1970, according to data analyzed by the nonprofit organization Climate Central.

With temperatures rising, the risk of power outages will likely increase in some regions of the country, according to Kern. Research shows that power outages have already increased by 60% since 2015.

“If we use future climate projections to question whether the grid can serve electricity to people in 10 to 15 years, the answer is sometimes no,” Kern said. “But that doesn’t necessarily mean we’ll run out of electricity.”

Kern added that utility companies will need to build additional infrastructure to bolster power grids against rising temperatures, especially with summer electric loads potentially increasing by 15% in the coming decades.

Blackouts on the horizon

In a recent assessment, the American Society of Civil Engineers gave the U.S. electrical system a C- grade, noting that much of its infrastructure is aging and largely unable to withstand extreme weather events.

Kern said that even temperate regions of the U.S. where extreme heat is uncommon, such as the Pacific Northwest, will likely face grid reliability issues as annual average temperatures increase.

“People living in these regions don’t rely too much on air conditioning. But if heat waves become more common in the summer, more and more people might install it on their homes,” Kern said. “That would eventually strain those grids because the demand would outweigh the supply.”

Rolling blackouts are often initiated by utility companies to maintain power grids when all other emergency measures have failed to avoid a total shutdown, which can be deadly in the event of a heat wave.

Heat waves are one of the most common causes of weather-related deaths in the U.S. In fact, the historic heat wave in the Pacific Northwest killed nearly 200 people in Oregon and Washington.

“It’s dangerous for people to lose power during a heat wave,” Kern said. “A reliable power grid can be the difference between life and death.”

Powering into the future

North Carolina has never had to implement rolling blackouts, and while the state is experiencing warmer-than-average temperatures, it remains unlikely under current conditions, according to Kern.

Kern said the state’s utilities own and operate a wide array of power plants that rely on a combination of seasonally-available resources, such as coal and natural gas, to provide a stable supply of electricity.

Additionally, these utilities conduct short- and long-range planning to ensure they can meet increasing electricity demand, accounting for everything from population increases to climate change.

In the case of heat waves and other extreme weather events, many utilities are upgrading infrastructure across the grid and implementing “hardening” measures to protect electrical equipment, according to Kern.

“We have incredibly reliable and relatively affordable electricity service in North Carolina,” Kern said. “It’s really a testament to our institutions.”

But the future of North Carolina’s power grid remains uncertain, especially as utilities begin developing plans to achieve the state’s requirement of carbon-neutral electricity generation by 2050.

“There’s no question that we need to decarbonize the power sector if we want to tackle climate change,” Kern said. “But the potential for more frequent and severe heat waves in the future might influence the types of renewable energy that we use.”

Denial of responsibility! TechNewsBoy.com is an automatic aggregator around the global media. All the content are available free on Internet. We have just arranged it in one platform for educational purpose only. In each content, the hyperlink to the primary source is specified. All trademarks belong to their rightful owners, all materials to their authors. If you are the owner of the content and do not want us to publish your materials on our website, please contact us by email – [email protected]. The content will be deleted within 24 hours.
Carolinasextremegadget updategridheatNorthpowerReady
Share FacebookTwitterGoogle+ReddItWhatsAppPinterestEmail

AI favours the rich and powerful, disadvantageous for the rest: Mozilla

Fitbit to Discontinue Support for Music Transfer From Computers This…