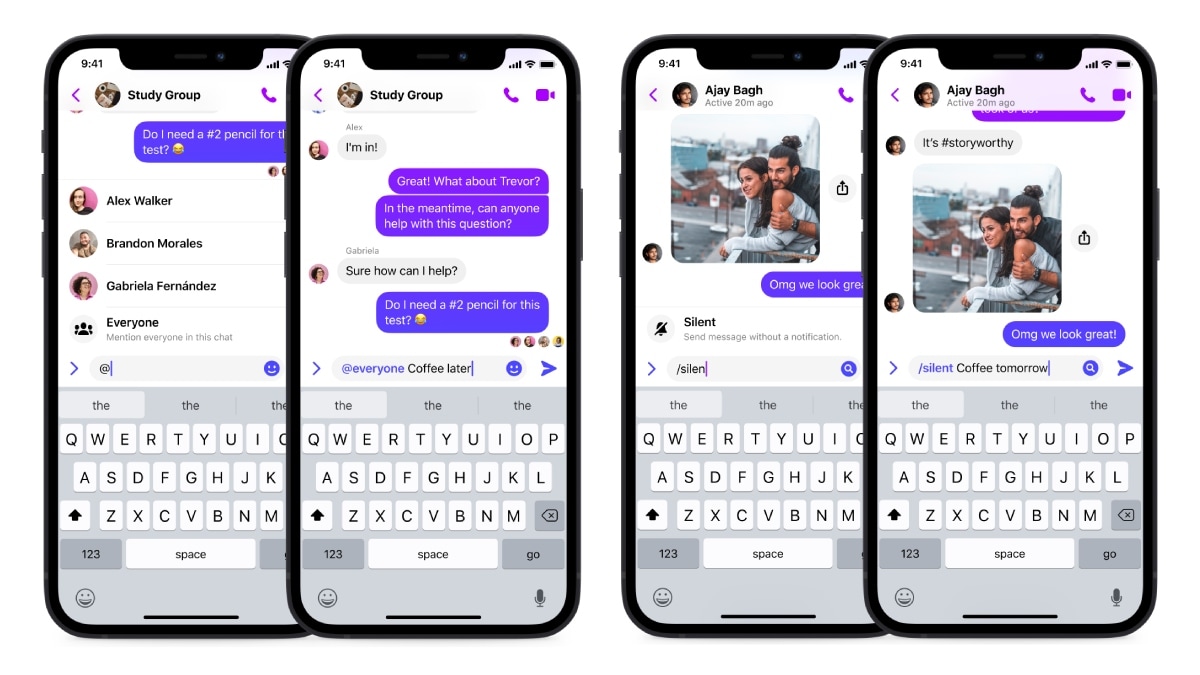 Facebook Messenger has released a new set of features called Shortcuts, using commands on the messaging service. Users on iOS and Android smartphones can now issue commands in the chat window to perform different tasks like notifying everyone in a group, or silently send a message without notifying other users. They can also send GIFs and ASCII emoticons on Facebook Messenger. The new features are reminiscent of the now defunct MSN Messenger’s hidden ‘Easter Egg’ commands and are designed to make certain tasks on Messenger easier through the use of one-word commands.

The Meta-owned messaging service revealed on Tuesday that it was introducing Shortcuts for Facebook Messenger on Android and iOS, which will be available starting today. Using the Shortcuts feature, users can now type @everyone to send a notification to all users in the chat. The command can be used to call group members’ attention to a message asking a question, or as a reminder for an older message.

Users can also utilise Shortcuts on Messenger to message a user or group without notifying them, using the /silent command. Messages sent using this command will not notify the user about the message, which could come in handy when messaging friends in different time zones without disturbing them. The ability to send messages silently without disturbing the recipient is also found on rival messaging service Telegram, which introduced the feature in 2019.

It is worth noting that certain Facebook Messenger features announced earlier this year are yet to be enabled for all users on the service. In January, the company announced an upgraded messaging experience for users in its Secret Conversations mode, which uses end-to-end encryption (E2EE) for chats. These features include screenshot alerts, emoji reactions, and Vanish mode, announced ahead of the company’s planned date to use E2EE for all chats on Messenger.

Asked about the delay in rolling out these features, Head of Messenger Loredana Crisan told Gadgets 360 that some of these features were being tested by the company for stability before being rolled out to all regions.

Both the /silent and @everyone Shortcuts will be available to Facebook Messenger users on iOS and Android devices starting today, according to the company. Meanwhile, the company is also working on adding the ability to search for and send GIFs to users and groups on Messenger using the /gif command. Users will also be able to use /shrug and /tableflip commands to send tableflip “(╯°□°）╯︵ ┻━┻” and shrug “¯_(ツ)_/¯” emoticons on Messenger.

These three commands will be available to users on iOS devices in the coming weeks. Messenger users in the US will also be able to send and receive money by using the /pay command in the future, the company said.

Denial of responsibility! TechNewsBoy.com is an automatic aggregator around the global media. All the content are available free on Internet. We have just arranged it in one platform for educational purpose only. In each content, the hyperlink to the primary source is specified. All trademarks belong to their rightful owners, all materials to their authors. If you are the owner of the content and do not want us to publish your materials on our website, please contact us by email – [email protected]. The content will be deleted within 24 hours.
addsFacebookFacebook Messengerfacebook messenger shortcuts new feature silent messages mention gifs emoticons launch facebookfeaturegadget updateMessengerMETA
Share FacebookTwitterGoogle+ReddItWhatsAppPinterestEmail

Apple and the Streaming Mirage