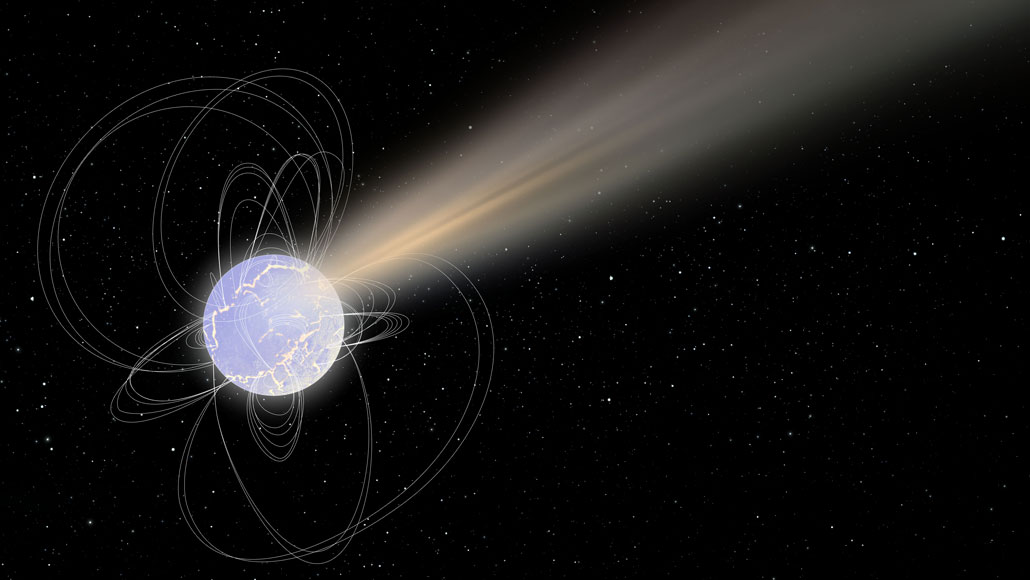 Astronomers have been arguing about the rate of the universe’s expansion for nearly a century. A new independent method to measure that rate could help cast the deciding vote.

For the first time, astronomers calculated the Hubble constant — the rate at which the universe is expanding — from observations of cosmic flashes called fast radio bursts, or FRBs. While the results are preliminary and the uncertainties are large, the technique could mature into a powerful tool for nailing down the elusive Hubble constant, researchers report April 12 at arXiv.org.

Ultimately, if the uncertainties in the new method can be reduced, it could help settle the long-standing debate that holds our understanding of the universe’s physics in the balance (SN: 7/30/19).

“I see great promises in this measurement in the future, especially with the growing number of detected repeated FRBs,” says Stanford University astronomer Simon Birrer, who was not involved with the new work.

Astronomers typically measure the Hubble constant in two ways. One uses the cosmic microwave background, the light released shortly after the Big Bang, in the distant universe. The other uses supernovas and other stars in the nearby universe. These approaches currently disagree by a few percent. The new value from FRBs comes in at an expansion rate of about 62.3 kilometers per second for every megaparsec (about 3.3 million light-years). While lower than the other methods, it’s tentatively closer to the value from the cosmic microwave background, or CMB.

“Our data agrees a little bit more with the CMB side of things compared to the supernova side, but the error bar is really big, so you can’t really say anything,” says Steffen Hagstotz, an astronomer at Stockholm University. Nonetheless, he says, “I think fast radio bursts have the potential to be as accurate as the other methods.”

No one knows exactly what causes FRBs, though eruptions from highly magnetic neutron stars are one possible explanation (SN: 6/4/20). During the few milliseconds when FRBs blast out radio waves, their extreme brightness makes them visible across large cosmic distances, giving astronomers a way to probe the space between galaxies (SN: 5/27/20).

As an FRB signal travels through the dust and gas separating galaxies, it becomes scattered in a predictable way that causes some frequencies to arrive slightly later than others. The farther away the FRB, the more dispersed the signal. Using measurements of this dispersion, Hagstotz and colleagues estimated the distances to nine FRBs. Comparing those distances to the speeds at which the FRBs’ host galaxies are receding from Earth, the team calculated the Hubble constant.

The largest error in the new method comes from not knowing precisely how the FRB signal disperses as it exits its home galaxy before entering intergalactic space, where the gas and dust content is better understood. With a few hundred FRBs, the team estimates that it could reduce the uncertainties and match the accuracy of other methods such as supernovas.

“It’s a first measurement, so not too surprising that the current results are not as constraining as other more matured probes,” says Birrer.

New FRB data might be coming soon. Many new radio observatories are coming online and larger surveys, such as ones proposed for the Square Kilometre Array, could discover tens to thousands of FRBs every night. Hagstotz expects there will sufficient FRBs with distance estimates in the next year or two to accurately determine the Hubble constant. Such FRB data could also help astronomers understand what’s causing the bright outbursts.

“I am very excited about the new possibilities that we will have soon,” Hagstotz says. “It’s really just beginning.”

Denial of responsibility! TechNewsBoy.com is an automatic aggregator around the global media. All the content are available free on Internet. We have just arranged it in one platform for educational purpose only. In each content, the hyperlink to the primary source is specified. All trademarks belong to their rightful owners, all materials to their authors. If you are the owner of the content and do not want us to publish your materials on our website, please contact us by email – [email protected]. The content will be deleted within 24 hours.
burstsexpansionfastgadget updateMysteryradiosolvetech boy
Share FacebookTwitterGoogle+ReddItWhatsAppPinterestEmail

Ransomware: A cheat sheet for professionals