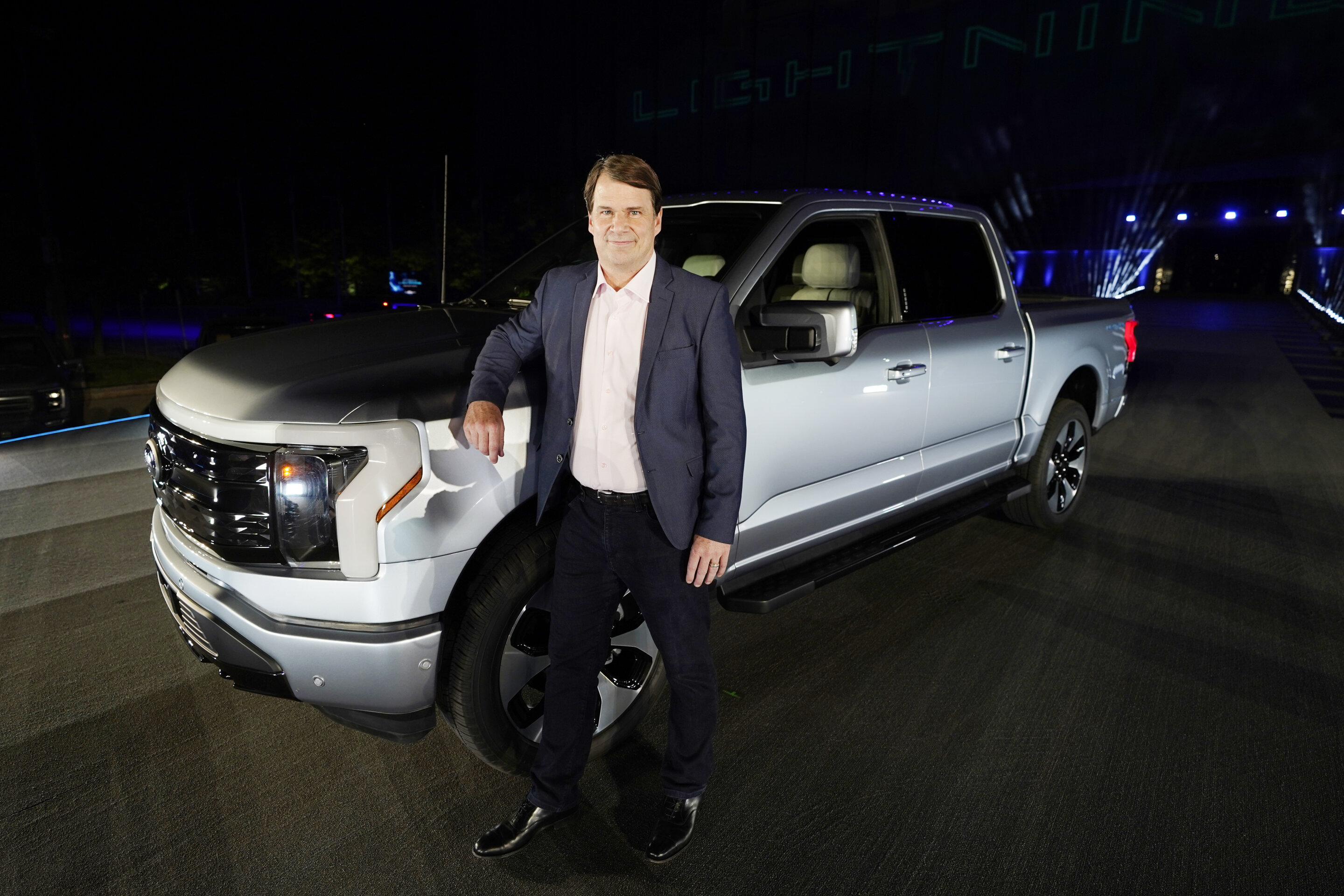 A new electric version of Ford’s immensely popular F-150 pickup truck might just be the catalyst that hastens America’s transition from gasoline to battery-powered vehicles.

Jim Farley, the company’s new CEO, calls the introduction of an electric version of the nation’s top-selling vehicle a watershed moment for Ford as well as for the auto industry. The new truck, called the F-150 Lightning and due in showrooms by next spring, will be able to travel up to 300 miles (480 kilometers) per battery charge and tow up to 10,000 pounds (4,500 kilograms) .

Yet Ford’s commitment to the EV F-150 is hardly without risk. The company spent millions to develop the truck at a time when sales of electric vehicles remain minuscule—just 2% of the U.S. auto market. Many truck owners will be reluctant to switch from gasoline engines. And there’s the distinct possibility that at least in the early months and perhaps years of production, automakers could run short of EV batteries and the scarce precious metals needed to make them.

The Associated Press spoke recently with Farley about electric vehicle sales and a global chip shortage that has hindered auto production. The interview was edited for clarity and length.

Q: Why is the Lightning so important to Ford, and why are you offering an electric version before other models?

A: We’re starting with our icons because we know the customers the best and we can surprise them with the best execution. But the real key is the scale. We sell 1.1 million (F-Series) units a year. So these customers really trust us. If there’s a company who’s going to take them into an electric future, it’s Ford.

A: It’s going to be pretty close. It depends on the specifications. The vehicle is faster than a Raptor (F-150 high performance gas version.) It’ll power your house for three days or a heck of tailgate. We have the latest interior technology, over-the-air updates. You could argue it’s going to give the internal combustion product a heck of a run.

Q: How long do you think it will be until the majority of vehicles you sell are battery electric?

A: A lot of it will depend on government support, the infrastructure (charging stations) build-out, as well as a support for the purchase. We have a $7,500 benefit still at Ford. So it depends on what happens with government policy, and whether that tips the scale for a lot of customers. It has in Europe. China is moving fast. We’re totally sold out with the Mach E (Electric SUV). On the West Coast, it’s already changed quickly. It’ll be a matter of time before that sweeps across the country.

Q: You have said the global semiconductor shortage will halve your normal production in the second quarter. Do you see that shortage ending this year?

A: These components are a high percentage of our build-of-material these days, and we can’t really continue to run just-in-time inventory on components like this. It’s a real game changer in how we look at our supply chain. We are seeing some positive indications from chip producers. The big change is the Renesas facility (a chip factory in Japan that was damaged by fire) coming back online. As that facility ramps up to 100%, we’ll feel a lot more confident. So we’re not through this. I’m not going to give any predictions about what the second half looks like.

Q: Does that 50% production loss figure for the second quarter change?

A: Certainly in the second half we see much less impact. We had about 200,000 units of lost production in the first quarter. The second quarter is going to be the most difficult. We see, conservatively, a couple of hundred thousand units of risk in the second half.

Q: You’ve mentioned that you may buy chips directly from the factories and stockpile them. Is this going to change the way Ford buys critical parts?

A: I really do think so. This is a really significant event. It’s not really black swan events, Renesas is, but it’s really more kind of dealing with the realities of a different supply chain focused on electronic components. Silicon is a big part of every vehicle. I do think that everything’s on the table. We’ve also learned that you have to engineer flexibly for these components. You may have to have a design on the shelf in case something runs lean.

Q: You have said you may move from having huge inventories on dealer lots to an order-from-the factory business model?

A: Most of our customers do their shopping online now. We just are expanding our e-commerce platform. There are a couple of pieces that are now starting to come together. The first is a reservation system, so that people are more likely to order what they want versus going into the dealership and ordering off the inventory. We have to make it easier. We’ve done that. The next thing is, our order-to-delivery has to improve. The next thing is very large-scale remote pick-up and delivery.

Q: Dealers say that people would embrace four weeks from order to delivery. Is that realistic?

A: That’s about what we see in Europe. About 50% of our retail customers in Europe order their car. It’s somewhere between four and six weeks. It all depends on how popular the model is. There’s a big benefit for us on the cost side and marketing. But on the F-150, with millions and millions of combinations, we have to do a lot of complexity reduction to pull that off.

A: The whole system will be a lot leaner, and the company doesn’t have to do the public advertising. There’s a lot of efficiency gains that customers really don’t benefit from today. There will be lower costs, which we’ll pass on to the customers. It generally will not be a big change for customers. I just think they’ll save a lot of time.

Q: Ford has plans to build its own electric vehicle batteries. Do you see these as being union plants, and will they pay as much as jobs now do at Ford powertrain plants?

A: Michigan is a good example, where we make the F-150. That’s a UAW plant. VanDyke (in Sterling Heights, Michigan) is another one. They’re making motors for the F-150 electric. The jobs are changing. We think that by working with the government and our UAW partners, we can secure American jobs as we move to e-mobility. It’s critical for our country. It’s critical for Ford. One of the real game-changers in this area is (battery) cell production. By in-sourcing cells, not just motors, power electronics, things like that, we have the opportunity to create more jobs. And although the vehicles are 30%-plus more efficient to make, by in-sourcing batteries, we can offset that risk.

Denial of responsibility! TechNewsBoy.com is an automatic aggregator around the global media. All the content are available free on Internet. We have just arranged it in one platform for educational purpose only. In each content, the hyperlink to the primary source is specified. All trademarks belong to their rightful owners, all materials to their authors. If you are the owner of the content and do not want us to publish your materials on our website, please contact us by email – [email protected]. The content will be deleted within 24 hours.
ceodemandelectricFordgadget updateindustrytech boytech news
Share FacebookTwitterGoogle+ReddItWhatsAppPinterestEmail

PlayStation VR2 now available for preorder — even if you…