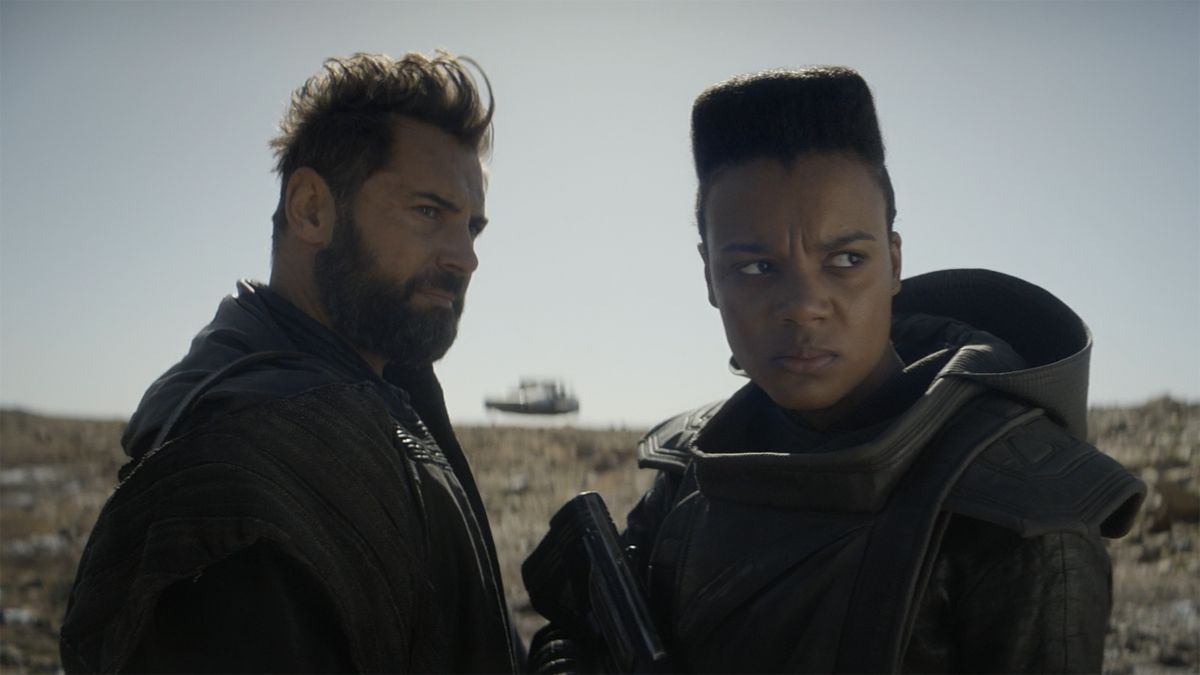 Major spoilers follow for Foundation episodes 1 to 4. Watch them first before reading on.

It’s about time, Foundation. After four episodes of politicking, sluggish plot pacing and character introductions, Apple TV Plus’ sci-fi series is preparing to up the ante in an action capacity.

Barbarians at the Gate, episode 4’s official title, doesn’t deliver any meaningful action, but what it does do is act as a precursor for the battles to come. Yes, Foundation has taken another episode to get to this point, but it’s a relief that we may finally see something in the way of action in episode 5.

While it makes us wait another week for a long overdue fight sequence (hopefully, anyway), though, Foundation episode 4 isn’t solely composed of filler material.

Barbarians at the Gate is an entry defined by power struggles between the old guard and the new blood, with some intriguing dimensions added to dynamics between various characters. And the show is all the better for it.

Once episode 4’s confusing opening segment is out of the way, it’s clear that divisions are beginning to grow between the Galactic Empire’s three rulers.

Brother Dawn (Cassian Bilton) questions the protocols that Brother Day (Lee Pace) and Dusk (Terrence Mann), as well as those Cleon clones before them, have followed for centuries. The trio also debate religion, science and whether free will has a place in either construct. And, while the conversation reaches a satisfying conclusion, an underlying tension remains.

It’s this straining of their normally tight relationships that, after three and a bit episodes, finally gives us some story payoff later in episode 4.

We see Day lose his temper when the Empire’s most experienced statisticians inform him that, after 35 years of research, Hari Seldon’s predictions aren’t entirely false. Later, we witness Day and Dusk have a suspense-filled standoff as they argue about who should make an important trip to a female-led conclave – a verbal battle that Days wins. Pace is wonderfully menacing in both scenarios, bringing a level of terror and tyranny that’s been somewhat absent from the Empire’s chief ruler so far.

Like the statistician scene, Day’s emotionally charged criticism of Dusk is a throwback to events of an earlier episode. In this case, it’s the Empire’s chilling decision to retaliate to Thespis and Anacreon’s alleged Starbridge attack in episode 2. It’s a perfect example of how traumatic events can affect someone later in life, too, with Day (now the grown-up version of Dawn we saw in episodes 1 and 2) still clearly affected by what he observed as a child.

Plot payoffs aren’t solely reserved for Foundation’s Trantor storyline. On Terminus, we bear witness to the impact that the Empire’s genocidal attack had on Anacreon.

After being ambushed at the end of episode 3, Salvor Hardin (Leah Harvey) turns the tables on Anacreon’s invading forces. Tricking their leader Phara (Kubbra Sait) into believing that she’ll co-operate, Salvor uses the Vault’s disorienting force field to take Phara as her prisoner. Back at Terminus City, Salvor and Hugo interrogate Phara to find out why Anacreon warships are orbiting Terminus.

It’s here where Salvor determines that Phara was a child during the Empire’s retaliatory bombardment of her home world and Thespis. With Anacreon now an uninhabitable planet, Phara’s scouting party was sent to Terminus to steal a spaceship navigation module that would allow them to search for a new world to call home.

Foundation hadn’t followed through on any of its early episode plot threads until this point. Seeing it do so now on Trantor and Terminus, then, is a welcome and necessary change in its narrative direction. Foundation couldn’t have continued to set up future storylines without acknowledging, and returning to, plot points that it had laid before. Thankfully, it’s starting to deliver on that front: here’s hoping that similar pay offs are implemented in later episodes.

Gratifying as those story-focused returns are, Foundation still suffers from a push and pull between too much or too little exposition.

Barbarians at the Gate’s opening five minutes are a perfect example of how Foundation struggles to provide the necessary context to its story. The introduction of a primarily female-centric council, which is due to meet following the death of former leader Proxima Opal, is too swift and confusing to follow. Brother Day is traveling to the conclave by episode 4’s end, so this group is clearly an important part of Foundation’s immediate future. Unless viewers rewatch episode 4’s beginning to understand the conclave’s significance, though, Foundation doesn’t do a good job of establishing them as part of its world.

By contrast, its Terminus storyline is a bit too heavy-handed with the exposition. Salvor practically walks us through Phara’s whole history, including the revelation that she’s Anacreon’s grand-huntress. It’s all a bit easy for Salvor and Terminus’ other key players to work out and, by extension, doesn’t allow viewers to unravel the mystery themselves. There’s a disparity between what Foundation needs to tell us and what it should let us work out for ourselves. The sooner that it finds a balance between the two, the better.

Hopefully, episode 5 will provide Foundation with the opportunity to take stock and iron out those issues. That is, as long as its next entry primarily focuses on the Terminus battle that’s teased in episode 4’s final moments. It would be a shame if Foundation makes us wait another week, especially as it feels that its Terminus storyline has been building to this moment for the past two episodes. And, honestly, we could do without so much talking and politicking for one entry.

If Foundation episode 5 needs to take the occasional break from its first major fight – just so its audience doesn’t suffer from battle burnout – it would do well to update us on who is rescuing Lou Llobell’s Gaal Dornick. Episode 4’s final scene shows Gaal’s stasis pod, which has presumably been floating in space all this time, being recovered by an unknown ship. Is it Raych Seldon (Alfred Enoch) or somebody else? With any luck, we’ll find out in episode 5.

Barbarians at the Gate feels like something of a crossroads for Foundation. It carries more tension than some of its predecessors, makes good on some of the plot threads it laid down early on and it’s gearing up for some much-needed action.

But it’s still lacking in important areas. A couple of episode 2 moments aside, it’s an emotionally cold show. Combine that with ponderous plot moments and its variance in exposition, and Foundation still feels like it needs a big moment or shocking twist to make its audience sit up and take notice. Think the big death in Game of Thrones season 1 episode 9, or Westworld’s seventh episode – Trompe L’Oeil – and you’ll get the idea.

If that comes in its next episode (we’d even take episode 6 at this point), Foundation will turn its fortunes around. There’s enough here to make it a very good show: it’s full of thought-provoking themes, ethical dilemmas, and morally questionable characters. But it needs a major surprise or memorable event to push it into the realms of unmissable TV. Foundation hasn’t found its own yet, and that’ll continue to hold it back until it does.

New episodes of Foundation debut exclusively on Apple TV Plus every Friday.

Denial of responsibility! TechNewsBoy.com is an automatic aggregator around the global media. All the content are available free on Internet. We have just arranged it in one platform for educational purpose only. In each content, the hyperlink to the primary source is specified. All trademarks belong to their rightful owners, all materials to their authors. If you are the owner of the content and do not want us to publish your materials on our website, please contact us by email – [email protected]. The content will be deleted within 24 hours.
ActionConversationepisodeFoundationgadget updateRecaptech boytech news
Share FacebookTwitterGoogle+ReddItWhatsAppPinterestEmail

Smart robots do all the work at Nissan’s ‘intelligent’ plant