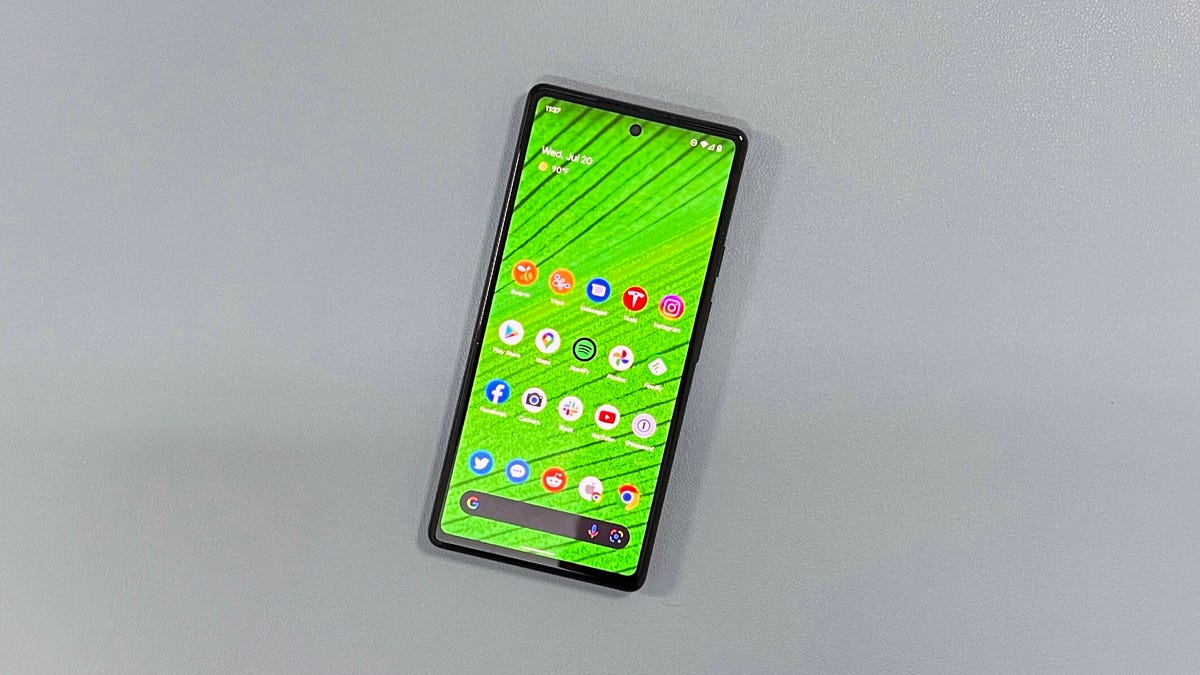 Google Pixel 6a review: Half the price of Pixel 6 Pro, but just as good

It’s about to get a lot harder to recommend Google’s flagship smartphones, the $599 Pixel 6 and $899 Pixel 6 Pro. Not because either phone is bad — the exact opposite, in fact. But because the $449 Pixel 6a is available to order starting today, July 21, with deliveries following a week later on July 28.

The Pixel 6a is arguably half the phone that the Pixel 6 Pro is, both in specifications and price, and yet, the experiences are nearly identical.

I’ve been using the Pixel 6a for the last two weeks, replacing an alternating rotation of the Pixel 6 Pro and Samsung Galaxy Z Fold 3 as my main Android device. There are some clear corners that Google cut to get the Pixel 6a down to half the price of its biggest sibling, but the overall experience hasn’t suffered one bit.

The Pixel 6a carries over the same design as the 6 and 6 Pro, using the camera bar on the back of the phone to break up the charcoal, chalk, and sage color options. The camera bar is where the two rear-facing cameras — a main 12-megapixel and an ultra-wide 12-megapixel — and flash are housed. There’s a slight bump from the bar that stops the phone from lying flat on a desk, instead holding it up at a slight angle.

On the front is a 6.1-inch OLED 2,400 x 1,080 FHD+ display with a 60Hz refresh rate. Centered at the top of the screen is an 8-megapixel hole punch front-facing camera. On the right edge of the phone are the volume rocker and the power button. The bottom edge is home to a USB-C port, and the left edge has the SIM card tray. There isn’t a headphone jack to be found on the Pixel 6a, something that was included on the Pixel 5a and has, so far, been a staple feature of other entry-level phones.

Speaking of the edges, the 6a uses the same flat-edge design as the standard Pixel 6, whereas the 6 Pro has curved vertical edges that make it feel thinner and narrower than it actually is.

The 6.1-inch display is slightly smaller than the Pixel 6’s 6.4-inch and the Pixel 6 Pro’s 6.7-inch display, giving it the smallest footprint out of the three. At first, I felt as if the 6a was almost too small. I prefer the 6 Pro’s size for daily use, but it can be hard to manage for single-handed use, even with the curved edge display. But the longer I used it, the more I felt like Goldilocks with the size of the 6a feeling just right.

One cost-cutting area for Google and the Pixel 6a is the material used on the outside of the phone. The display is covered with Gorilla Glass 3, which presumably isn’t as rugged as the Gorilla Glass Victus used on the 6 and 6 Pro. The 6a has the same polished aluminum frame look to it, but the specification sheet states the 6a has an alloy frame, whereas the 6 and 6 Pro have aluminum frames with different finishes.

Finally, the 6a has an IP67 dust and water resistance rating instead of IP68 for the more expensive models.

Inside the Pixel 6a is the same exact processor that launched inside the 6 and 6 Pro, Google Tensor, 6GB of memory, and 128GB of storage. The memory is another cost-saving measure, but I haven’t noticed any issues with 6GB compared to the 6 Pro’s 12GB of memory.

There’s a 4,410mAh battery that’s been more than enough power to get through a full day of use. In fact, I took the Pixel 6a on a short trip to Portland, Oregon where I was constantly looking up the next place to eat or drink, getting directions, taking photos, or calling a Lyft and I never once got nervous about running out of power during the day. Battery life is a non-issue on the Pixel 6a.

But Portland was sunny during my visit and I purposely tested the fingerprint sensor multiple times in direct sunlight without any hiccups.

For the first couple of days of testing, there were a few instances where it felt like the 6a was taking too long to open an app or switch between screens. I don’t know if I was expecting it to run slower than the 6 Pro and my mind was playing tricks on me, or if the phone was busy optimizing in the background, but since then the Pixel 6a has run without any issues or sluggishness on my end. I wanted to run the benchmark app Geekbench 5 to see how the 6a’s score compared to other Android phones and the iPhone 13, but the Play Store listing won’t currently let me install it. I’ll update this post once I can officially install the app and run it.

Google made big changes to the 6a when it comes to the rear cameras, again to save on overall cost. The dual 12-megapixel camera setup, on paper at least, looks like it’d take good, but not great, photos when compared to the 6 Pro’s camera specs (50MP main, 12MP ultra-wide, and 48MP telephoto).

However, I took a bunch of photos over the last two weeks with the 6a and most of them look great. There are a few photos where it struggled with color saturation, but as you can see in the picture of the roses below, that’s a tough picture to get right for any camera.

This egg sandwich from Fried Egg I’m In Love was amazing, and the photo the Pixel 6a captured does it justice.

This mural is a rough shot because of all the different colors, with the blue sky and sunlight on the buildings behind it. It’s a little dark, but overall I really have no issues with it.

Here’s another, just for fun:

The lack of wireless charging is the one feature I found myself missing the most while testing the 6a. My daily routine, desk, and nightstand are all optimized for passively wirelessly charging the various phones I use throughout a given week.

Otherwise, the lower display refresh rate, lower resolution cameras, and less memory than its older counterparts weren’t something I ever even thought about, let alone noticed.

My experience over the last two weeks with the Pixel 6a proves that your phone doesn’t need to have the best parts and pieces to provide the best experience. The Pixel 6a is arguably half the phone that the Pixel 6 Pro is, both in specifications and price, and yet, the experiences are nearly identical.

If you’re shopping for an Android phone and want a reliable, well-rounded phone that’s affordable, look no further than the Pixel 6a.

Denial of responsibility! TechNewsBoy.com is an automatic aggregator around the global media. All the content are available free on Internet. We have just arranged it in one platform for educational purpose only. In each content, the hyperlink to the primary source is specified. All trademarks belong to their rightful owners, all materials to their authors. If you are the owner of the content and do not want us to publish your materials on our website, please contact us by email – [email protected]. The content will be deleted within 24 hours.
gadget updategoodGooglePixelpriceProReviewtech boy
Share FacebookTwitterGoogle+ReddItWhatsAppPinterestEmail

Card tokenization could change the way we transactions work online:

89% of Indians want a 5G upgrade, even if it means changing service…

Card tokenization could change the way we transactions work…

89% of Indians want a 5G upgrade, even if it means changing…