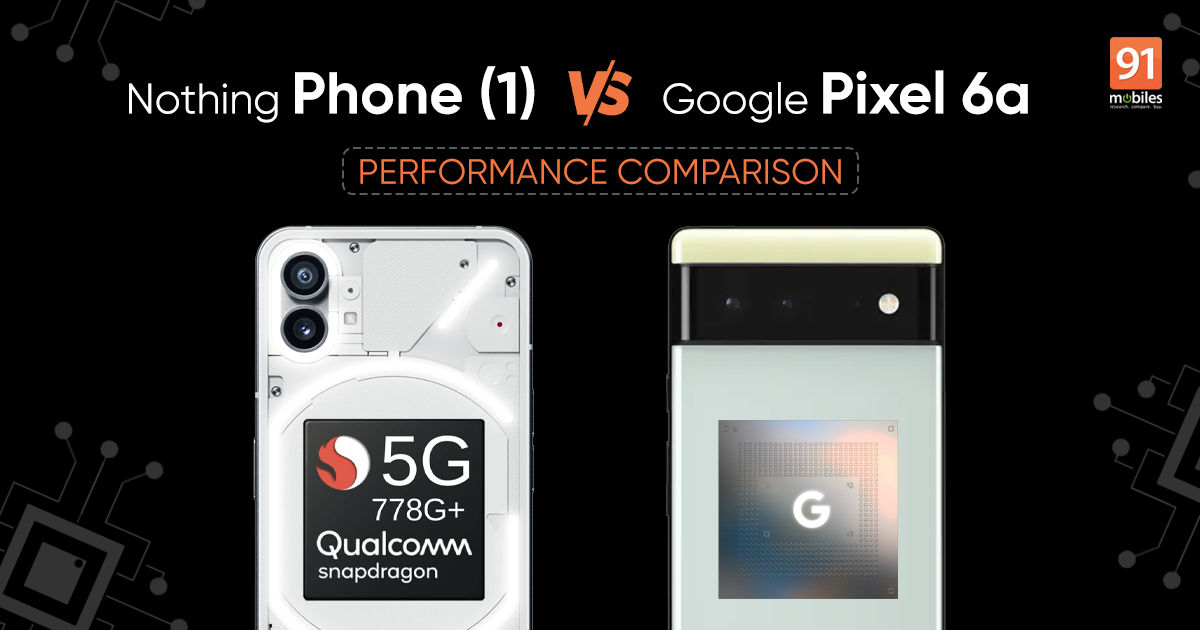 Google Pixel 6a vs Nothing Phone (1) performance comparison: is Google Tensor any good?

It’s quite uncommon for an Android phone to be backed by a custom chipset. In fact, the Android market is dominated by devices that fuel their performance from Qualcomm or MediaTek processors. There are exceptions, of course, and we’ve seen Samsung deploy its custom Exynos chipset for its mid-range as well as premium offerings. More recently, Google announced the Pixel 6a smartphone in India which makes use of the company’s all-new, in-house Tensor SoC too. 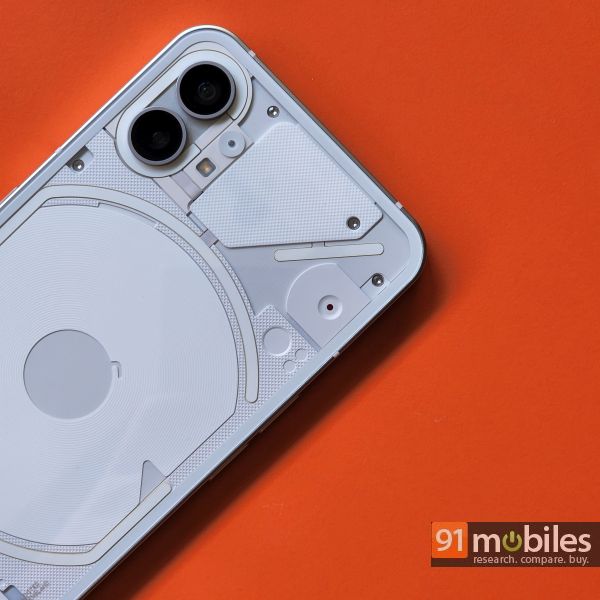 Unsurprisingly, there is a lot to be said about the chipset’s performance capabilities and whether it can hold a candle to the recently launched Nothing Phone (1) (review). So, today, I will be pitting the devices against each other in an in-depth performance comparison to figure out which handset will give you the most bang for your buck. Read on, to find out.

First things first, let’s talk about our contenders’ core specs. To wit, the Pixel 6a makes use of Google’s 5nm Tensor chip which comprises two Cortex X1 cores, two Cortex A76 cores, and a quad-cluster of Cortex A55 cores. For memory, the smartphone comes equipped with LPDDR5 RAM and UFS 3.1 storage. The Nothing Phone (1), on the other hand, ships with Qualcomm’s 6nm Snapdragon 778G+ processor which features four Cortex A78 cores and four Cortex A55 cores. And, much like Google’s Tensor chip, Qualcomm’s 778G SoC also ships with LPDDR5 RAM and UFS 3.1 storage.

Let’s kick things off by taking a closer look at the benchmark scores secured by our contenders. Here, I noticed Google’s offering edged in front of the Phone (1) by a reasonable margin. Case in point, the results from the Antutu benchmark wherein, the Google Pixel 6a secured 6,62,320 points in the first run. The Phone (1), on the other hand, capped out at 6,08,164 points. Interestingly, the Pixel 6a’s scores are in line with what we’ve seen from the Exynos 2100-backed Samsung Galaxy S21 Ultra (review).

In fact, per numerous reports, Google’s Tensor chip has Exynos roots and the processor reportedly sits between Samsung’s Exynos 2100 and 2200 chipsets. Be that as it may, both the SoCs outputted stellar scores in subsequent Antutu runs too. To wit, the Pixel 6a secured 6,47,624 and 6,46,456 points, whereas the Nothing Phone (1)’s scores deviated by just a couple thousand points and the handset overturned 6,03,661 and 6,03,711 points in the second and third run respectively.

Turn the page over to GeekBench and you’ll get a similar result. Now, unlike the Antutu benchmark, GeekBench primarily tests a processor’s computing capabilities. Here, Google’s Pixel 6a yielded 1,032 and 2,659 points in the single-core and multi-core tests. On the flip side, the Nothing Phone (1) secured a lower single-core score of 825 points, which can be accredited to the lack of a high-performance Cortex X1 core in the SoC’s arsenal. That said, the device managed to net a better multi-core score of 2,946 points in the test run. Needless to say, the results are on par with one another, so for now, let’s take a look at the disk read and write speeds from the two phones. 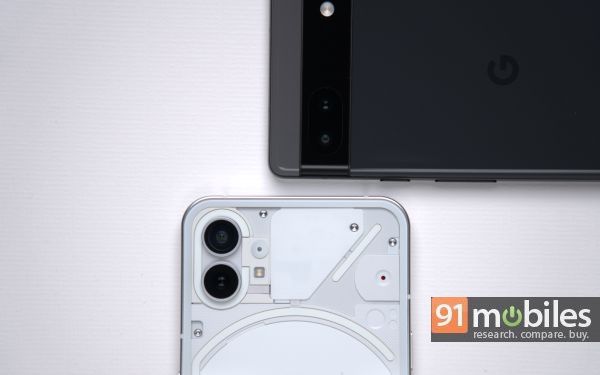 As prefaced previously, both our gladiators feature speedy LPDDR5 memory and UFS 3.1 storage. Unsurprisingly, the devices output stellar sequential read and write speeds in the cross-platform disk test, with the Pixel 6a peaking at 958.71MB/s and 206.01MB/s respectively. The Nothing Phone (1), on the other hand, outputs slightly quicker speeds at 1.2GB/s and 619.5MB/s respectively. Unsurprisingly, both the phones were quick to open apps and the device could hold around half a dozen apps in memory as well, which is great.

Much to my surprise, the Google Pixel 6a is more susceptible to throttling than the Nothing Phone (1), despite utilising a more efficient fabrication process. This could be in parts owing to the chipset’s high-performance Cortex X1 cluster which, for the uninitiated, can boost up to 2.8GHz. The Snapdragon 778G+, on the other hand, boasts a peak frequency of 2.5GHz. Regardless, I overloaded both the phones with 20 threads in the CPU throttle benchmark for a period of 30 minutes. 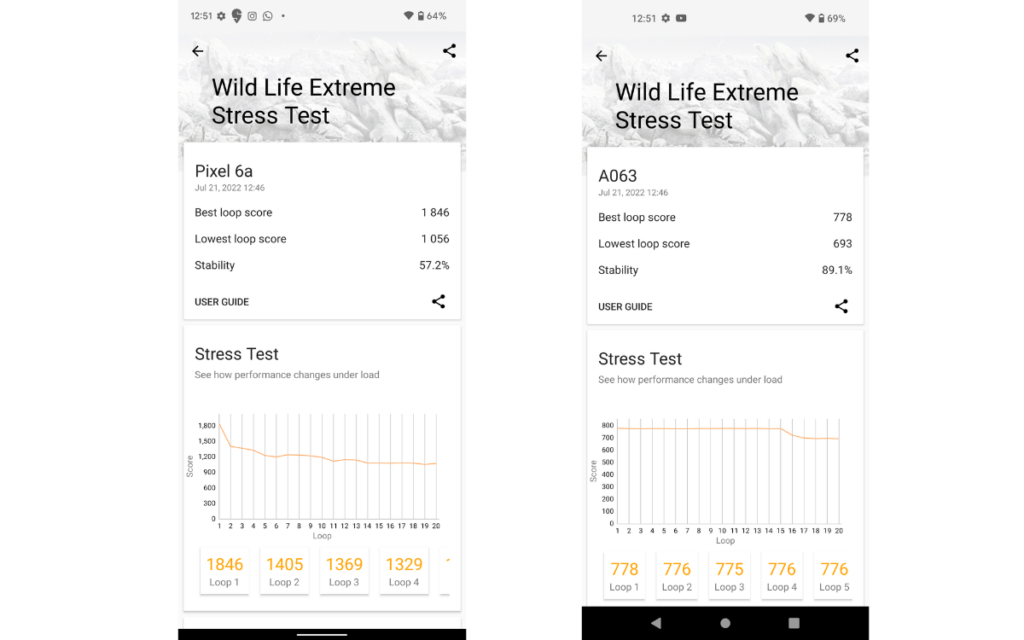 The scenery remains unchanged in 3DMark’s Extreme stress test wherein, both the Pixel 6a yielded an 57.2 percent system stability. The Phone (1), on the other hand, overturned a significantly better result and the device retained 89.1 percent stability in the test run. Clearly, buyers eyeing the Pixel 6a will have to contend with a fair share of throttling issues. In fact, the handset’s only saving grace is that it outputted a significantly better best loop score of 1,846 points as opposed to the Phone (1)’s 778 points. What’s more, the device touched up to 14FPS in the test run, whereas the Nothing Phone (1) capped out at just 7FPS. Needless to say, the Pixel 6a’s Tensor chip is a better performer albeit the SoC throttles more too.

Synthetic tests aside, let’s take a closer look at the Pixel 6a and the Nothing Phone (1)’s gaming prowess. To wit, both the devices run games at the exact same graphics and FPS presets. For instance, I was able to run BGMI on the phones with the graphics and frame rate set to the HDR and Ultra (45FPS) or Smooth and Extreme (60FPS) presets respectively. Similarly, Call of Duty Mobile ran at ‘Very High’ graphics and ‘Max’ FPS settings on the two phones.

Turn the page over to a more demanding BR title like Apex Legends Mobile and the phones had to contend with running the game at the Normal graphics and Ultra FPS presets respectively. Unfortunately, neither of the two handsets support the UHD texture pack in BGMI, or the Original graphics preset in Apex Legends Mobile.

Clearly, the devices are more than adept at running demanding games at competent settings. Be that as it may, my gaming experience was significantly better on the Nothing Phone (1). In fact, I ran into a ton of frame drops when playing Apex Legends Mobile on the Pixel 6a. To give you a better picture, I exported the FPS data from the two phones and the results are mindboggling, to say the least. You can refer to the slider attached above for more details but, to cut a long story short, the Phone (1) churned out a higher average FPS (59.7FPS vs 58.4FPS), remarkably lesser small and big janks (in-game stutters) and reported a lower FPS drop per hour too.

So, where does that leave us? Well, there’s no two ways about it – the Pixel 6a is a competent performer and the smartphone’s Tensor chip is in fact, faster than the Phone (1)’s Snapdragon 778G Plus SoC. Be that as it may, the device’s throttling issues cast a tall shadow on the chipset’s otherwise impressive performance chops and the handset struggles to maintain its peak throughput in synthetic tests and games. Consequently, as good as the chipset is, the Phone (1) makes for a better buy as it is a more reliable daily driver. It also helps that the Phone (1) costs less and is better suited to extended gaming sessions. Do let us know in the comments below if you’d like us to compare the Tensor chip to any other SoC and as always, stay glued to our blog for more tech updates.

Denial of responsibility! TechNewsBoy.com is an automatic aggregator around the global media. All the content are available free on Internet. We have just arranged it in one platform for educational purpose only. In each content, the hyperlink to the primary source is specified. All trademarks belong to their rightful owners, all materials to their authors. If you are the owner of the content and do not want us to publish your materials on our website, please contact us by email – [email protected]. The content will be deleted within 24 hours.
comparisonfeaturegadget updategoodGooglegoogle pixel 6aMobilesnothing phone (1)
Share FacebookTwitterGoogle+ReddItWhatsAppPinterestEmail

Nothing Phone (1) sale: Pre-order offers end, how much the smartphone will cost you now – Times of India

What do bosses really want? Four ways to get noticed in a changing…

Giancarlo Esposito really wants to play Professor X in the…

Everyone will be invited to Apple’s September iPhone…