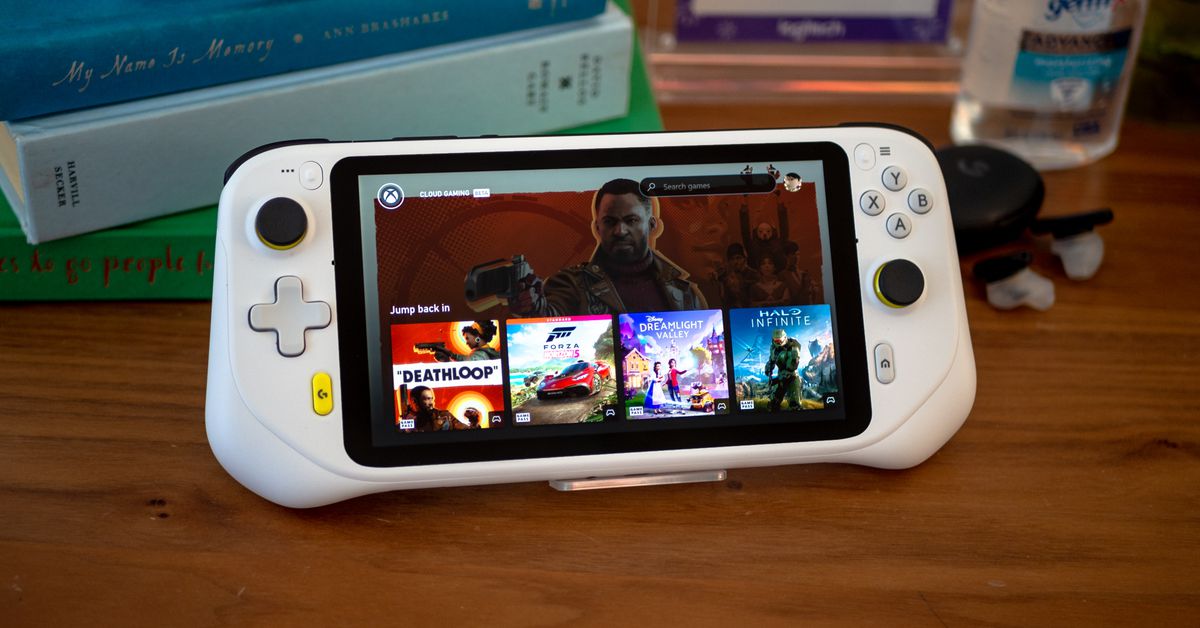 Yesterday, Logitech announced its $349.99 G Cloud Gaming Handheld, which is coming out in the US on October 17th (until then, it’s $50 off to preorder). Today, I got to briefly test it out. It was just a 10-minute demo, but it was long enough for me to snap a few photos, launch some apps, and see how it felt in my hands. We’ll have a full review in the coming weeks.

As I arrived at the testing station, Deathloop (freshly available on Xbox Game Pass) was streaming via Wi-Fi to the handheld’s Xbox Cloud Gaming app. Sadly, it was the action-less intro sequence, but I still got to sprint and jump around. Though it wasn’t a fun killer, like all of my experiences with cloud game streaming, there was just a whiff of input lag that, at least for me, is difficult to ignore. On the plus side, the G Cloud’s buttons, triggers, and analog stick layout feel good. As for visual fidelity, it’s tough to know how much can be blamed on a congested Wi-Fi network, but the game’s dark environments looked a little fuzzy on its seven-inch 1080p IPS panel.

That wasn’t the case when I switched to Fortnite via the Nvidia GeForce Now app. Exiting Xbox Game Pass and booting into a new app was satisfactorily speedy. My initial impression is that if your baseline expectations for speed in a handheld consist of just the Nintendo Switch, I think you’ll probably be impressed with how responsive the performance and interface navigation feel — perhaps not so much if you’re coming from a Steam Deck. At its best, Fortnite on the G Cloud Gaming Handheld looks better and runs smoother than it does on the Switch (not a very high bar, I know), though that depends entirely on the capabilities of your Wi-Fi network. Of course, since this is an Android-based handheld, it’s probably possible to get actual Fortnite loaded onto this thing and not worry about the whole cloud aspect. Though, I’m not sure how well it’d run with its Snapdragon 720G and 4GB of RAM.

The rest of my time with the G Cloud Gaming Handheld was spent getting lost in its Android launcher that Tencent apparently assisted with in development, which feels ripped out of the Android Honeycomb days (even though the unit that I tested was running Android 11). It’s easy enough to find all of your apps, aside from the gaming-focused ones that it puts front and center. When you’re looking at your full app library, you can click a face button that serves as a portal to the Google Play Store, where you can download practically anything, I’d imagine. Aesthetically, the user interface is trying for a gamer-y vibe that didn’t totally click with me.

The G Cloud Handheld is comfortable to hold. The built-in grips offer a good amount of palm support, and the textured plastic around its back and on the triggers is a nice touch. In terms of ergonomics alone, I’d definitely prefer to lose a few hours playing games on this than on the Switch. On the bottom, there’s a headphone jack next to a USB-C port that’s used primarily for charging. It can’t support pushing video out to external monitors — I asked — though it’ll work with USB-C audio transmitters for headsets that offer that kind of thing. On the top left of the handheld’s rail, there’s a volume rocker next to a sleep switch (you can power it down through the software, as well). And finally, there’s a microSD card slot over on the right side, next to the right shoulder buttons.

This handheld feels and looks well designed, and it took no time at all for me to feel like this is a gadget that I want to spend a lot more time testing. Though, like most Logitech products, polished as it feels, spending time with it didn’t change that I’m not a fan of its $349.99 retail price. You have to be totally bought in, not just to this handheld but to the services that you want to play games on. So, the cost only goes up from there.

Looking outside of this handheld, it’s really difficult to underplay how much value some of the other popular handheld consoles offer right now, including the $199 Switch Lite or the more capable $299 Switch that can connect to a TV. Not to mention, the Steam Deck’s $399 starting price is a tempting alternative if you want to play PC games on the go. Even so, Android tablets fashioned into handhelds that are readily available for purchase are just uncommon enough that the G Cloud Gaming Handheld could be a hit. We’ll have to see.

Denial of responsibility! TechNewsBoy.com is an automatic aggregator around the global media. All the content are available free on Internet. We have just arranged it in one platform for educational purpose only. In each content, the hyperlink to the primary source is specified. All trademarks belong to their rightful owners, all materials to their authors. If you are the owner of the content and do not want us to publish your materials on our website, please contact us by email – [email protected]. The content will be deleted within 24 hours.
Cloudgadget updategaminghandheldhandsonLogitechstech boytech news
Share FacebookTwitterGoogle+ReddItWhatsAppPinterestEmail

Google widgets for iOS 16 lock screen are available now for…