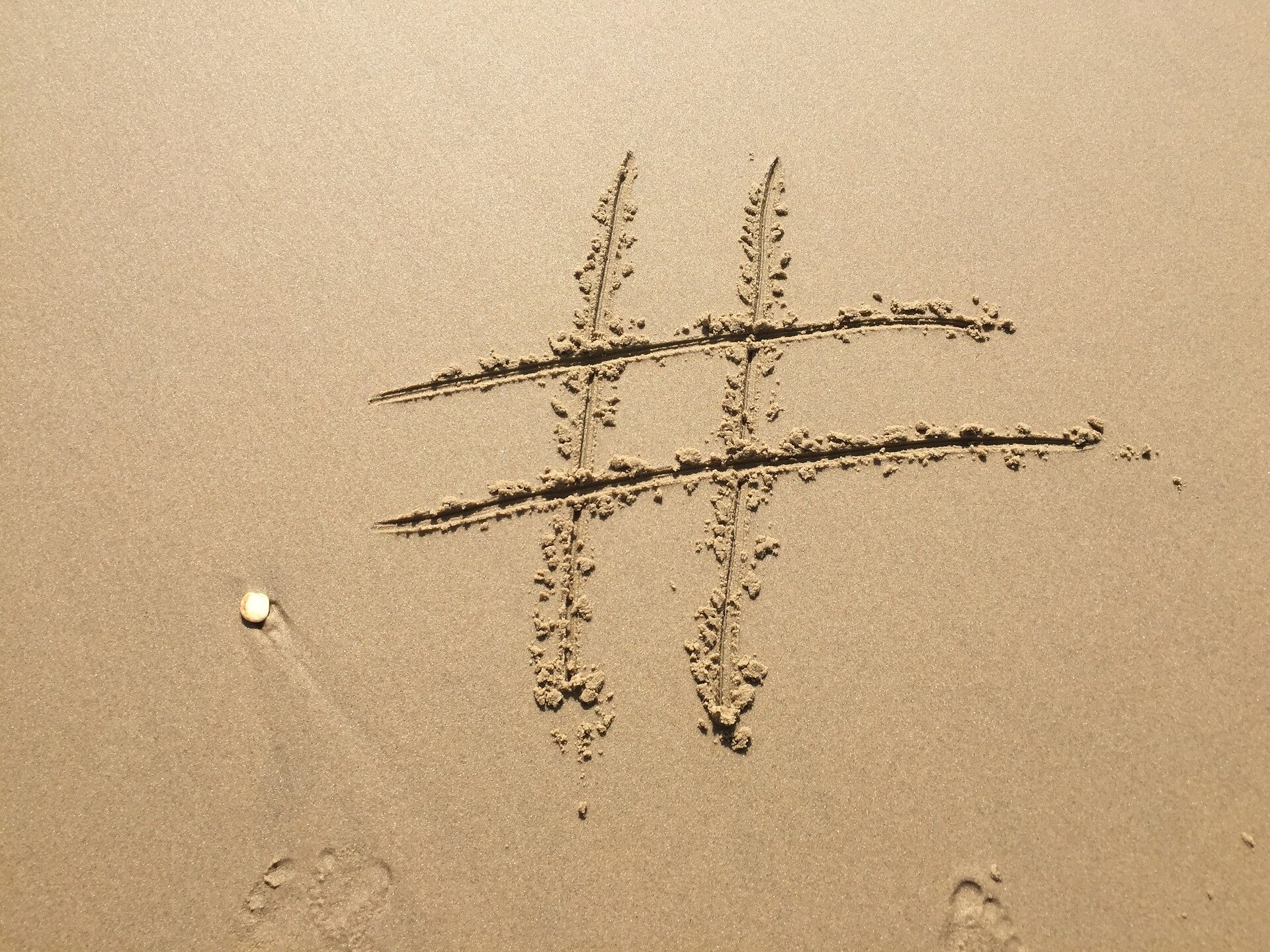 Hashtags felt dated and cringeworthy. So why are influencers still using them?

Internet fads tend to have a distinct life cycle. First, the embrace by early adopters and tastemakers, particularly the young. Next, an explosion of popularity leading to inescapable ubiquity. Finally, death by overexposure and a wretched zombie afterlife of continued usage by parents and the terminally uncool.

Not long ago, hashtags were firmly on that trajectory. Born as a way to make social media content searchable and then recruited as a cheeky form of commentary, they quickly became a signifier of trying too hard. Wrapping up that status update with a paragraph-long wall of #blesseds and #forthewins? You might as well hoist a skateboard and ask, “How do you do, fellow kids?”

But now a generation of influencers and would-be influencers, many of them natives of platforms that didn’t exist when the hashtag first started trending, are bringing it back, and for the most undeniable of reasons: It’s an indispensable tool for turning internet fame into money.

For Katie Feeney, a hashtag can be worth $100,000. That’s the upper end of what she says some brands will pay her to post videos that include their custom hashtags to her 5.6 million TikTok followers.

“A year ago, I wasn’t using hashtags at all,” Feeney, 18, told The Times. But once she started taking her career as an influencer more seriously, they became a big part of her online presence. “I didn’t really realize how important hashtagging is.”

It’s a shift industry insiders say is becoming more and more common. Between the companies that will pay influencers to use specific hashtags and the TikTok algorithm’s reliance on hashtags in determining which videos go viral, the little pound sign has become a potent weapon in any professional TikToker’s arsenal.

Feeney’s profile is knee-deep in them.

As she and her friends show off where they’re going to college: #college. #highschool. #seniors. #classof2021. #senioryear. #seniorszn. #2021.

Between TikTok and the other platforms on which she has a presence—including Snapchat’s TikTok clone Spotlight, which has paid her more than $1 million—Feeney’s celebrity is proving quite lucrative. Hashtags helped her get there.

“It’s surprising how fast you can grow when you actually follow the best practices,” she said.

Hashtags were a grass-roots invention, born out of popular demand. In 2007, not long after Twitter launched, an early adopter named Chris Messina came up with the idea of retrofitting pound signs into an ad-hoc system for sorting through the platform’s rising volume of tweets.

The idea was a hit among users, but Twitter itself was initially uninterested. Only after it had acquired other companies that had already implemented hashtags did Twitter “begrudgingly” incorporate the feature, Messina said in an interview. Instagram followed suit, then Facebook, and soon enough hashtags were a near-universal feature of platform architecture.

They were taking on cultural cachet, too. In the first few years of the twenty-teens, social movements including the Arab Spring and Kony 2012 latched on to the hashtag as a cross-platform branding tool, as did more mainstream corporate marketing campaigns. Drake turned #YOLO into an entire ethos; Kanye West coined the term “hashtag rap”; Jimmy Fallon riffed on how ubiquitous the symbol had become.

“When we worked with creators five, six years ago, everybody hated the hashtags,” said Brian Nelson, who works with Feeney and other influencers through his marketing agency, the Network Effect. “In the millennial age group, the latter millennials thought it was corny. That was what I was getting from everyone; those are the exact words. Like, an eye roll.”

Blogs started churning out lists of the most annoying hashtag trends. People complained that even if hashtags were easier for machines to read, they were harder for actual humans. And flooding social media with a torrent of tags went from a sketch comedy conceit to an actual annoyance.

Social media’s increasingly visible dark side may have also put a dent in their popularity. “Hashtags don’t only attract unmet friends: they also attract opponents,” internet theoretician Mark Bernstein said over email. “By late 2014, organized groups were exploiting hashtags to find their foes, frustrate them, and to drive them from the internet.”

Analysis by the media research firm Zignal Labs corroborates this rise-and-fall arc. Looking at how often certain generic hashtags were used between Twitter’s 2006 launch and May 2021, data Zignal compiled for The Times show that the use of many hashtags—including #fashion, #photo, #selfie, #travel, #food, #weekend, #fitness, #joke and #springbreak—rose for several years, peaked and then declined. A few others rose before flattening out, and only three (#christmas, #earthday and #nature) have continued to get more popular. Neither Twitter, TikTok, Facebook nor Instagram provided The Times with their own data on trends in hashtag use.

By the end of the decade, the prognosis looked grim. “Are hashtags dead?” a marketing agency pondered in 2018. “Hashtags Are Dead,” declared another agency in 2020.

It seemed like hashtags may have been a momentary cultural blip, doomed to fall out of fashion like low-rise jeans and middle parts.

And then, like low-rise jeans and middle parts, they were pulled back from the brink—by TikTok.

TikTok didn’t invent the idea that you could make money by posting on social media, of course; before Charli D’Amelio and Addison Rae were household names, there were YouTubers and Instagrammers and even, briefly, Vine stars.

But TikTok has changed what that economy looks like. While Facebook, Instagram and Twitter are now scrambling to add tools that will help popular users monetize their content, TikTok has had those tools in place for a while now, giving rise to an entire ecosystem of “hype houses” and TikTok-native pop stars—not to mention a slew of copycat apps.

TikTok’s algorithm treats hashtags as an important signal in determining what shows up in its main feed. For anyone hoping to get rich off viral videos, then, the incentive to append hashtags, corny or not, is strong.

Nelson, the marketing executive, said he has seen an increase in usage among his clients as they seek out “every tool possible to get in front or gain followers.” Platforms host meetings with Feeney and other stars to advise them on “best practices” for (among other things) hashtag use.

Nowhere is the utility of hashtags more evident than in the proliferation of viral “hashtag challenge” videos encouraging users to upload videos of themselves performing an easy-to-imitate dance or meme.

“You’re going to pay five people, but thanks to the ‘one-to-many-to-many’ model that is inside the structure of TikTok, you can get maybe hundreds, if not thousands—and sometimes hundreds of thousands—of videos created for free,” said Alessandro Bogliari, chief executive of the Influencer Marketing Factory, which acts as a middleman between influencers and brands.

The behavior this economy encourages can be bizarre. If a corporate-sponsored hashtag gets trendy enough, people will start adding it to their own posts—no matter how unrelated the two are—in an attempt to surf the wave of virality. That results in incongruities such as a black-and-white clip of a rat hurling itself off a ledge, set to Billy Joel’s “Piano Man,” that features hashtags sponsored by Samsung and Bobbi Brown Cosmetics; or a Mastercard-funded hashtag showing up below a vaguely disturbing montage of someone turning their hand into a single giant finger with prosthetic makeup.

It’s hard to imagine that the companies spending $100,000 on hashtags are doing it with rodent deaths and B-movie grotesqueries in mind. But in some sense that’s exactly what they’re paying for: organic, bottom-up influence on the app everyone wants a piece of.

At least for now, it’s enough to keep the money and the hashtags flowing.

“Thanks to TikTok,” Bogliari said, “hashtags came back—mostly because of self-interest.”

Citation:
Hashtags felt dated and cringeworthy. So why are influencers still using them? (2021, June 2)
retrieved 5 June 2021
from https://techxplore.com/news/2021-06-hashtags-felt-dated-cringeworthy.html

Denial of responsibility! TechNewsBoy.com is an automatic aggregator around the global media. All the content are available free on Internet. We have just arranged it in one platform for educational purpose only. In each content, the hyperlink to the primary source is specified. All trademarks belong to their rightful owners, all materials to their authors. If you are the owner of the content and do not want us to publish your materials on our website, please contact us by email – [email protected]. The content will be deleted within 24 hours.
cringeworthydatedfeltgadget updateHashtagsinfluencerstech boytech news
Share FacebookTwitterGoogle+ReddItWhatsAppPinterestEmail

How to easily deploy a full-stack application in Portainer with…

Qualcomm hopes that mmWave 5G can still be useful

PlayStation VR2 and Horizon Call of the Mountain have me…

How to easily deploy a full-stack application in Portainer…