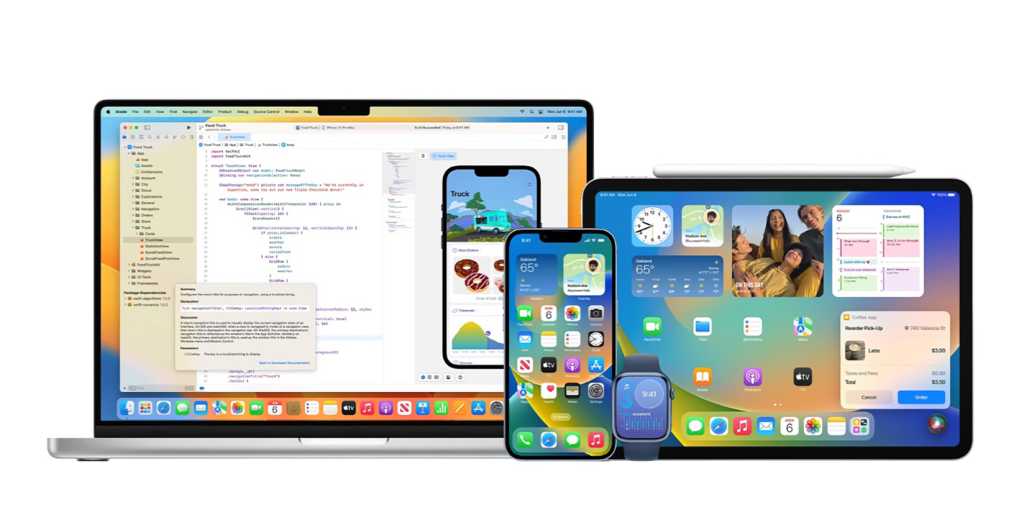 How Apple is laying a foundation for a smarter, more connected future

Apple’s public betas are an opportunity for all of us—not just developers prepping apps—to get a peek into the future of the company’s software. Granted, we’re not transporting ourselves to a far-off year where no doubt we’ll all be wearing Apple-branded headsets and riding in Apple cars—this time travel jaunt is only a matter of months. But it’s still a chance to see what new capabilities we’ll be able to take advantage of come the fall.

If we zoom out a bit, though, we can also see the hallmarks of places where Apple is investing in the future, or—to use the classic adage that has become an Apple operating principle—skating to where the puck will be. Because Apple has a tendency to lay the groundwork for major changes years in advance, knowing it’s going to take some time for the rest of the world to catch up.

This year is no different. iOS and iPadOS 16, macOS Ventura, watchOS 9, even the latest update to the HomePod software are all about not just the year ahead, but the years ahead, with features that will change our lives in big ways—eventually. Just not necessarily right away.

Passkeys to the castle

Apple first added support for passkeys as a technology preview in its 2021 platform updates, but in this year’s software the feature is ready for prime time—even if prime time isn’t quite ready for them yet.

Passkeys, to refresh your memory, are a technology that aims to replace passwords for logging into websites, apps, and services. Rather than relying on you to remember a string of letters, numbers, and symbols (or a password manager that keeps track of them for you), passkeys use public key cryptography to create login credentials that are managed entirely by system software and secured by your biometrics and/or a single password/passcode. They are difficult to phish and don’t rely on the services and apps to store your information, which means they won’t be subject to the same sort of data breaches that passwords so often are.

But it’s going to take some time for all those services and apps to adopt the new password-less future, which is why Apple is rolling out its support now—it certainly doesn’t want to be the laggard. And, thankfully, Cupertino’s not alone in pushing this idea; other big tech companies like Microsoft, Amazon, and Google are all onboard as well. But Apple’s integration is a big deal: think how many people have even a single Apple device and what kind of potential for adoption that can drive. It can’t come soon enough.

What does it Matter?

Like passkeys, Matter was a technology framework that Apple started building in support for in last year’s software updates, but really starts to come into actual usage this year.

Of course, this isn’t something that’s going to immediately come into play for existing users of smart home tech. Rather, it’s a gradual process that will see more and more Matter-compliant devices released over the next few years (or, potentially, existing devices updated to work with the standard).

Matter will require either a HomePod or Apple TV to act as a home hub—previously Apple also allowed the iPad to be used for such a purpose, but the idea seems to be that it requires a device always connected to your network and in your home. It also opens up more compatibility with Thread, a new networking technology that improves range and reliability of smart home devices (Apple’s already built Thread radios into the HomePod mini and latest AppleTV, which may also go toward explaining the aforementioned requirement.)

As someone who’s invested a lot in smart home tech (and dealing with all the interoperability challenges that result), the idea of having a lot more devices that will work together is exciting. And for those who have yet to dive into the market, it seems destined to make that experience a lot simpler.

One of the most ambitious things that Apple showed off during its Worldwide Developers Conference keynote last month was a major overhaul to its CarPlay feature, which interfaces with in-car entertainment and navigation systems. In partnership with (so far unannounced) automakers, Apple’s planning on expanding CarPlay to control every part of the driving experience, and eventually, let it work with every display in your car.

This is wild and far-reaching, and obviously, it’s the kind of thing that will depend a lot on your make and model of car. Plus, like the original CarPlay, it’s going to take some time to make its way into popular usage—people don’t buy new cars that often and, despite Apple’s characterization of CarPlay as a compelling reason to buy a car, very few people probably go out and buy a new one just to get access to the latest functionality.

But the seeds for it are built into iOS 16, which suggests that Apple expects new cars to be taking advantage of all of this within the next year or two. We may be in the earliest innings of this particular endeavor, but given how popular CarPlay has proved to date, it’s safe to say that this offering is likely to attract more than a few potential buyers in the long term. And it might just presage Apple’s bigger plans for the automotive industry…down the road.

Denial of responsibility! TechNewsBoy.com is an automatic aggregator around the global media. All the content are available free on Internet. We have just arranged it in one platform for educational purpose only. In each content, the hyperlink to the primary source is specified. All trademarks belong to their rightful owners, all materials to their authors. If you are the owner of the content and do not want us to publish your materials on our website, please contact us by email – [email protected]. The content will be deleted within 24 hours.
appleconnectedFoundationfuturegadget updateLayingsmartertech boy
Share FacebookTwitterGoogle+ReddItWhatsAppPinterestEmail