Google has launched plenty of forgettable and downright disastrous initiatives over the years, but one of its most successful and beloved bits of kit has to be Google Photos. While the u-turn on unlimited photo storage has taken the sheen off the app recently, Photos remains arguably the best photo backup option in the business and a cornerstone of the Android mobile experience.

Looking back at the initial launch seven years later, it seems to me that simplified photo backups was one of Google’s more ingenious plays in the mobile space.

Spinning off from the Google+ network back in May 2015, Google Photos arrived at the most opportune time. Smartphone photography quality was now a viable alternative to porting around a camera, with handsets like the Galaxy S6 and LG G4 boasting robust camera specs. However, limited mobile storage capacities and the growing absence of microSD card slots put a damper on how many pictures you could save. Online backups were much coveted, especially for free.

Of course, cloud storage options were plentiful already. Box and SkyDrive (now OneDrive) were popular choices but offered little more than basic folder structures, weren’t really built for library management, and offered limited free allowances. Services like Flickr and the then Google-owned Picasa catered explicitly to photographers, and did so better. However, Picasa Web Albums’ unlimited storage for 800×800 resolution photos was hardly a match for Google’s unlimited 16MP snaps, and the clumsy upload process was far from seamless. Not surprisingly, Google shut the service down in 2016.

Free unlimited 16MP snap storage was an unbeatable proposition back in 2015.

Flickr’s 1TB free option at the time was more competitive, especially if shooting in RAW, and more than most users would likely ever need. However, the free plan was ad subsidized, and the uploading process was clunky compared to Photo’s auto-backups. Flickr was also trying to fight off Instagram in the photography-social space, something Google wisely decided to leave behind with Google+.

Google Photos came out on top in this space largely due to its combination of free, high-quality, seamless image backups. For once, Google focused just on the essentials and executed nearly flawlessly. But that’s not the whole picture. 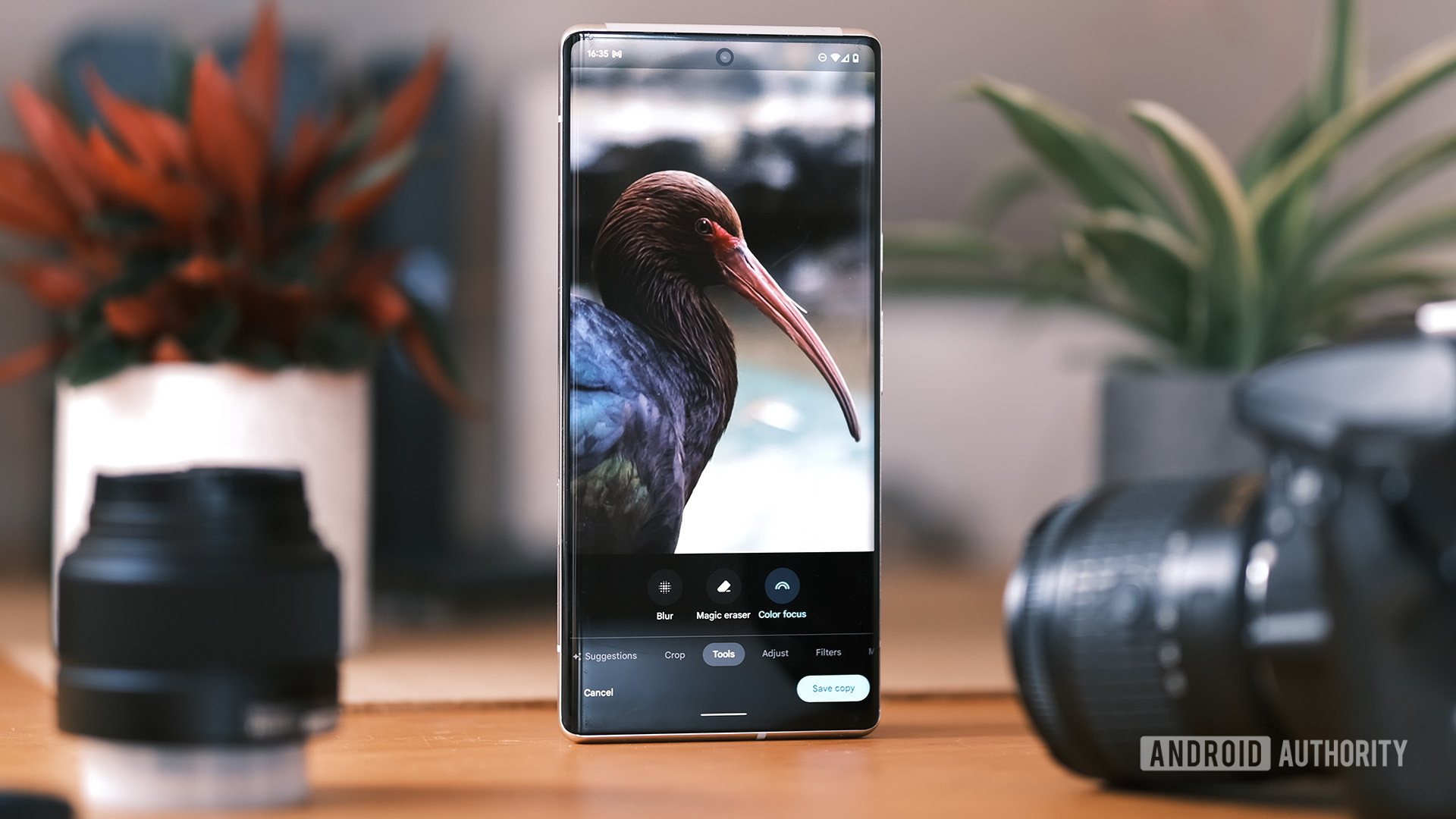 Google Photos’ continued success has hinged on much more than free storage and automatic backups. The app simplified the editing process, making automatic color and exposure correction recommendations that helped ensure every picture looked its best. The easy-to-use filters helped introduce editing to casual photographers while also providing a suite of sliders for the more experienced. Edits were, and still are, non-destructive, allowing for infinite tweaks and changes to images without degrading image quality — a real rarity even today. Although Photos has never directly competed in the social space, it offers all the tools you need to perfect and share your images all in one place.

Google continues to flesh out its image editing tool kit with much more powerful machine learning-based features. Post-shot adjustable bokeh blur and lighting adjustments are a boon for portraits. Magic Eraser can get rid of photobombers or just be used for a spot of fun. Google continues to increase the range of filters and skin tone options as well, keeping the app relevant as technology presses forward.

Photos avoided the social scene, but offers all the tools to perfect and share images from one place. 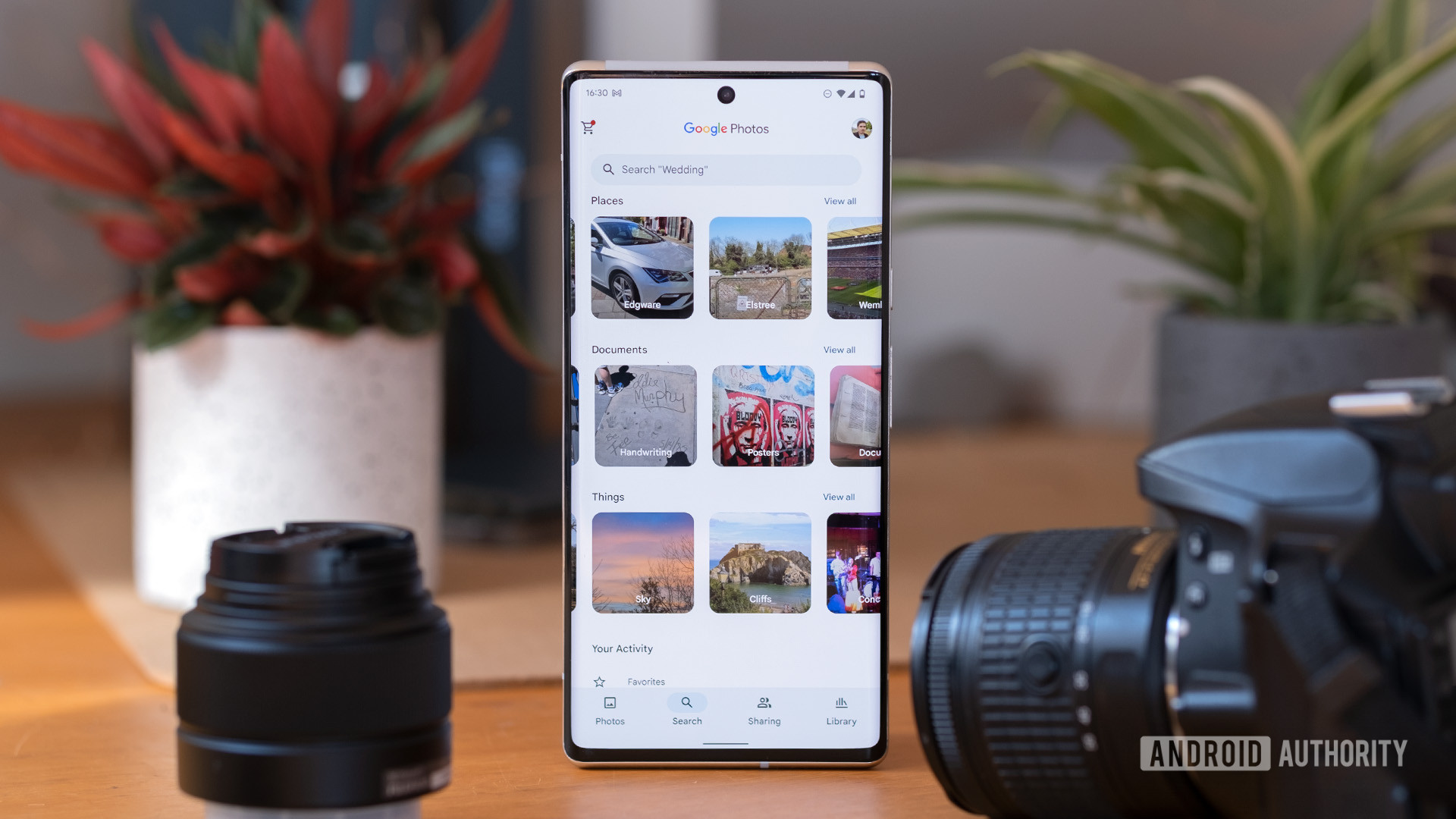 Machine learning has always been a core part of what makes Photos unique and more useful than the competition. Google initially took all the hassle out of organizing a huge library of uncategorized pictures, thanks to AI smarts. Yes, other services offered organization features, but Google did it better. Facial recognition and AI categorization were the cornerstones that allowed the app to search and automatically create albums based on faces even as they age, locations even without geotagging, and other more minute picture features. Want to find all those nice sunset snaps you’ve taken over the years? Google Photos can make you an album for that.

Google quickly took all the hassle out of organizing a huge library of uncategorized pictures.

Automatically categorizing stills by People, Places, and Things without any user input saved countless hours of tedious tagging and simplified digging out a specific image from a vast library. Not to mention that album sharing and the introduction of Recent Highlights made it even easier to share memories with those we care about. These features were impressive back in the day but have only become more useful as users have filled their storage with thousands and thousands of pictures over the past seven years.

Up next: Master Google Photos with these lesser-known features

Which quality setting do you use for Google Photos backups?

Google has its finger in many pies, but Photos stands out as one of its better products — despite now being tied to your Drive storage capacity. Altogether, the combination of editing and sharing tools, backed up by bountiful storage and powerful AI, is ensuring that Google Photos ages incredibly well. Even if you’re not an Android user, Photos has become an indispensable part of so many people’s digital lives.

Denial of responsibility! TechNewsBoy.com is an automatic aggregator around the global media. All the content are available free on Internet. We have just arranged it in one platform for educational purpose only. In each content, the hyperlink to the primary source is specified. All trademarks belong to their rightful owners, all materials to their authors. If you are the owner of the content and do not want us to publish your materials on our website, please contact us by email – [email protected]. The content will be deleted within 24 hours.
backupsgadget updateGoogleImagePerfectedPhotostech boytech news
Share FacebookTwitterGoogle+ReddItWhatsAppPinterestEmail

We are creating a simplified investing ecosystem

Memorial Day sales at Amazon: 35 deals you need to see before they’re gone

ROG Phone 6 vs Samsung Galaxy S22: How to two premium…