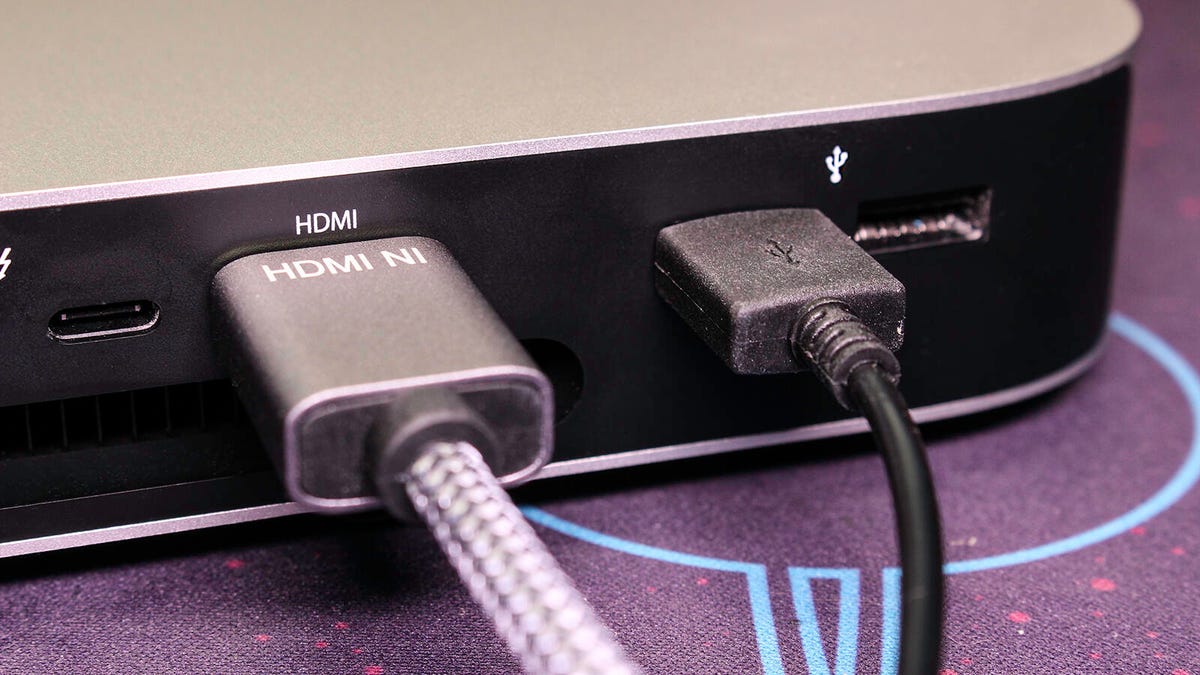 The debut of Apple’s M1 chips felt like one of the biggest game-changers in the consumer PC market in decades. Suddenly, this SoC (System on a Chip) offered a cheaper way to handle computing tasks that would otherwise require PCs costing several times as much. I, for one, continue to use an M1 Mac Mini as my primary photo and video editing system. That decision is what introduced me to the one very strange downgrade the M1 Mac Mini received, compared with its Intel-powered predecessor: its reduced Thunderbolt display outputs.

Previous-gen, Intel-based Mac Minis could support two Thunderbolt external displays. Thunderbolt is a display protocol that uses a special class of USB-C cables to deliver a video signal, and sometimes power, to an external display. It’s been a big selling point for Apple’s MacBooks and Mac Minis in recent years, thanks to the simplicity, flexibility, and impressive resolutions it provides.

That’s why it was such a surprise to me, and many other unsuspecting Mac Mini buyers, when we discovered that the seemingly better-in-every-way M1 Mini had been dropped from supporting two Thunderbolt displays to just one.

Sure, the diminutive PC does come equipped with an HDMI port as well. But what about folks upgrading from an Intel-based Mac Mini who were already using two Thunderbolt displays? Or those, like me, who had wrongly assumed when placing an order for the new Mac Mini that it would support two displays? Unfortunately, Apple has never provided a solution, unless you want to upgrade to a much more expensive, M1 Pro- or M1 Max-powered system like the Mac Studio. So, it’s up to us to find a way to make up for the M1 Mini’s problematic downgrade. Apple might hope you’ll drop hundreds, or thousands, more on an upgraded Mac to power your secondary Thunderbolt displays. I’ll show you how to do it for less than $30.

$30 (assuming you already have the Mac Mini and displays needed)

Online retailers are drowning in Thunderbolt (USB-C)-to-HDMI adapters. These convert the USB-C ports found in every MacBook and most other slim-and-light laptops into video outputs by adapting them to the HDMI protocol. However, it’s only recently that I’ve begun seeing adapters that do the opposite: convert an HDMI-enabled source into a signal usable by monitors with Thunderbolt inputs. I chose to create a full step for the act of simply buying the adapter because of how easy it is to be confused by poorly written product listings or imprecise language in tech specs.

The adapter I chose for my own setup was this one:

I have seen other models available for sale on Amazon and elsewhere. But, if you shop for one of those, be very careful to make sure you’re not buying one of the more common USB-C-to-HDMI adapters, as they’re useless for our purpose today. You can typically recognize the correct adapter type by the fact that it requires 5V power input, usually via a Mmicro-USB cable, and mentions that the USB-C side of this is an output, not an input.

Step 2: Connect the adapter to your Mac Mini

Once you have the adapter you need, the next step is to attach it to your Mac Mini system. First, insert the included HDMI cable into the HDMI port on the rear of your Mini. Then, insert the USB-A-to-Micro-USB cable into a free USB-A port on the back of your Mini and into the DC5V (or similarly named port) on your adapter. If you don’t have a free USB-A port on your Mini, you can also plug the USB-A end of the 5VDC power cable into a powered hub or even a 5V plug-in power adapter. As long as it receives the required 5V of power to complete its conversion process, just about any source should work.

Step 3: Connect the adapter to your Thunderbolt monitor

Thunderbolt 4 cables will also work, but they’re more expensive, and there’s no additional benefit from using them in this situation. Once you’ve got your Thunderbolt cable, insert one end into the port on the adapter and the other end into the Thunderbolt input on your monitor.

Step 4: Select the correct source on your monitor

With all of the necessary hardware hooked up, you’re just about ready to enjoy your new dual-monitor setup. The last step is to make sure your just-connected monitor is set to the correct input. Remember to look for the Thunderbolt input, not HDMI. Even though the Mac’s HDMI output is being used, the monitor will detect it as a Thunderbolt input thanks to our adapter’s conversion.

If you’re using something like one of the Apple monitors mentioned above, which has only a single Thunderbolt input, this won’t be necessary. However, if you’re using another manufacturer’s monitor, like my Samsung M7, you may need to switch to the input manually. Usually, this can be accomplished by tapping the Input button on your remote or monitor itself and following the onscreen menus.

If you’re interested in the specific 43-inch M7 display I use, it can be found below, alongside the smaller 32-inch variant:

From here, you should be able to use the newly connected display like any other Thunderbolt monitor, with the only exception being that it won’t receive any power from the Mac Mini.

Yes. Disregarding anything that would void your warranties or produce unreliable results, the only other verified way to add additional displays (more than two) to your Mac Mini is to use a specialized Thunderbolt dock. These devices, depending on their specific configurations, can output video to HDMI, DisplayPort, or Thunderbolt. However, they’re much more expensive than the adapter mentioned above, require more desk space and more connections, and might be overkill for anyone just looking to add a second Thunderbolt display they’ve already got.

That said, if you want to turn your Mac Mini into the heart of a massive, multimonitor workstation, we’ve included some links below to options for Thunderbolt docks that will let you do just that.

For the most part, no. If you’ve got a 4K Monitor with both an open HDMI and Thunderbolt input, use whichever is more convenient for your specific setup. The only exception to this is if you have a Thunderbolt-enabled monitor that exceeds 4K. The Mac Mini’s Thunderbolt 4 output can support resolutions of up to 6K. However, its HDMI output maxes out at 4K, even if it’s being adapted to Thunderbolt.

If you find yourself in this situation, be sure to use the MIni’s sole Thunderbolt video output on your 5K or 6K display, and the HDMI output (adapter or not) for a secondary 4K display. This is only likely to affect a very small subset of users, as most monitors and televisions still top out at 4K resolution.

Absolutely! The most well-known of these are likely Apple’s own offerings. Its recently launched Studio Display and older, more expensive Pro Display XDR both exclusively rely on Thunderbolt for their input. Attempting to add the relatively less expensive Studio Display to their systems might have tripped up some Mac Mini users who didn’t realize the M1 Mini was limited to just one Thunderbolt monitor.

Displays with Thunderbolt inputs are also made by Acer, Samsung, LG, Viewsonic, and many others. However, the vast majority of those will also include HDMI and/or DisplayPort inputs alongside Thunderbolt.

Denial of responsibility! TechNewsBoy.com is an automatic aggregator around the global media. All the content are available free on Internet. We have just arranged it in one platform for educational purpose only. In each content, the hyperlink to the primary source is specified. All trademarks belong to their rightful owners, all materials to their authors. If you are the owner of the content and do not want us to publish your materials on our website, please contact us by email – [email protected]. The content will be deleted within 24 hours.
Addeasilygadget updateMacminimonitortech boytech news
Share FacebookTwitterGoogle+ReddItWhatsAppPinterestEmail

Security threats could be terminal for your SMB, so stay alert