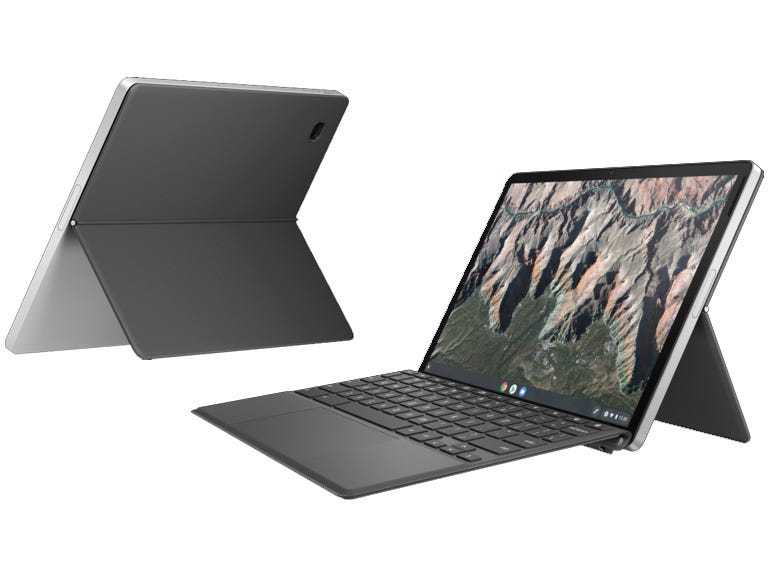 Chromebooks have been a popular option for many during the pandemic lockdowns, especially in the education sector. More generally, Chrome OS devices appeal to those with relatively low-level computing needs, and whose productivity takes place primarily in the cloud, via web apps. The HP Chromebook x2 11 is a 2-in-1 detachable device comprising an 11-inch tablet and a removable keyboard cover. The whole package is small enough to slip into a small bag when you’re travelling.

HP is certainly trying to push boundaries with the Chromebook x2 11: it is the first detachable Chromebook to be powered by Qualcomm’s Snapdragon 7c Compute Platform, which is designed to deliver a combination of octa-core performance and long battery life in thin-and-light fanless laptops. It can also support a SIM, so connectivity can be maintained when Wi-Fi isn’t available. However, the mobile broadband is only 4G LTE rather than 5G, while the Wi-Fi is 802.11ac (Wi-Fi 5) rather than 802.11ax (Wi-Fi 6). If you don’t need mobile broadband, you can use the SIM slot for storage expansion via a MicroSD card. 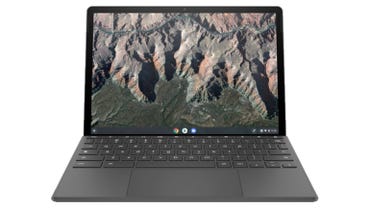 My review unit lacked a stylus, but the HP Rechargable USI Pen is an optional extra that costs £55, bringing the total cost of the Chromebook x2 11 to just shy of £600 (inc. VAT). What does come in the bundle is a three-part setup: the tablet itself, a kickstand that attaches to its back, and a keyboard cover. Both components use magnets, and both adhere very well to the tablet.

The kickstand works well, holding the screen securely at a range of angles. However, as is generally the case with kickstands, it only functions with the screen in landscape mode. If you want to prop up the Chromebook x2 11 in portrait mode, you’ll need to find another method.

The tablet, kickstand and keyboard together weigh 1.16kg. The tablet itself measures  25.25mm wide by 17.66mm deep by 0.75cm thick, with the other two parts adding only a few millimetres. All in, it’s not a lot to carry around, and I found that the keyboard and kickstand both stayed in place securely in transit.

The tablet is solidly built with aluminium sides and backplate, and feels comfortable in the hand. The kickstand and keyboard have rubberised finishes that protect the tablet from scratches, but they themselves are vulnerable. You may want to add a sleeve to ensure adequate overall protection.

The SIM slot and volume rocker are on the left edge, along with two USB-C ports which support both power delivery and DisplayPort. Either can therefore be used to charge the battery, with the other remaining free. The power button is on the top, and incorporates a fingerprint reader. There is no 3.5mm headset jack, and while these are no longer a fixture on tablets, they are still very much a staple for laptops; arguably it’s a misstep by HP not to include one.

There are two HP Wide Vision cameras: an 8MP camera at the back, in one corner, and a front-facing 5MP camera for video calls. Both webcams are supported by dual array microphones.

The pair of Bang & Olufsen speakers output via slots on either side of the screen. Sound quality is not great: there’s little bass, and a lot of treble. Spoken word content is fine, but music listening is not especially enjoyable. This diminishes the potential of the Chromebook x2 11 as an entertainment device.

The 11-inch IPS screen has 2,160 x 1,440 resolution (236ppi) and up to 400 nits of brightness. The 3:2 aspect ratio makes it suitable for reading and viewing, and I found it particularly good in landscape mode with ebooks spread across two columns. Colours are bright and quite poppy, and video looks good. The screen is very reflective, but that’s not unusual in this market.

To justify its price, the Chromebook x2 11 needs to function well for content creation as well as consumption, and here I found several issues. The 11-inch screen simply doesn’t provide enough space for writing documents such as this review comfortably, as too little of the text is viewable at once. Similarly it’s not feasible to work with two document windows open side by side. The on-screen keyboard is a no-go area. It obscures far too much of the screen to be useful.

The physical keyboard presents its own issues. Its natural state is to be raised a few millimetres at the point where it connects to the tablet. This means that as you hit the keys the keyboard wobbles up and down, creating an off-putting motion that caused me to slow down my typing speed. I had to slow my typing for two other reasons: first, the keys are very small and even my smallish hands were squished together to touch-type; second, there is sometimes a perceptible lag between hitting a key and a character appearing on the screen.

Maybe I’d get used to the lag, but it’s doubtful I’d adapt to the cramped keyboard. Add in the necessarily small Enter and Delete keys, which it took me a while to get used to, and the result, for me, was slow typing speed. The saving grace is a reasonable amount of travel for each key, but this doesn’t mitigate the other issues. The touchpad, on the other hand, is responsive and comfortable to use. But even here there’s an issue: it doesn’t seem to have palm rejection, which will be a constant irritation in everyday use.

The Snapdragon 7c chipset is supported by 8GB of RAM, a combo that made for smooth web browsing and video playback until I got to more than 20 open Chrome tabs and also wanted stream video: problems with slow responsiveness kicked in at this point. If this is the kind of workload you want from an everyday computer, then the Chromebook x2 11 may not be a good choice.  There is 128GB of eMMC storage built in, of which 98GB was available to me out of the box. As noted earlier, storage expansion via MicroSD card is available at the expense of a SIM card.

HP says the 32Wh battery will power 11 hours and 15 minutes of ‘mixed usage’. During testing in one three-hour working session it lost 31% from full, suggesting that while the quoted life might be hard to reach, an acceptably long stretch of around 10 hours should be achievable.

HP’s Chromebook x2 11 isn’t quite the all-rounder that a detachable Chromebook could be. With only Wi-Fi 5 and 4G support rather Wi-Fi 6 and 5G, it’s not on the leading edge of wireless connectivity. The 11-inch screen is too small for some kinds of work, particularly document creation, and the keyboard isn’t up to long typing sessions. Even when pure entertainment is the goal, the speakers are a let-down.

Battery life is good, though, and the build quality of both the tablet and kickstand are impressive. The presence of two USB-C ports is a plus point, but the lack of a 3.5mm headset jack is disappointing.

The Chromebook x2 11 is a tablet first and a productivity device second, which may be fine for many people. But be aware that you can buy a competent laptop with a larger screen for a similar price.

Denial of responsibility! TechNewsBoy.com is an automatic aggregator around the global media. All the content are available free on Internet. We have just arranged it in one platform for educational purpose only. In each content, the hyperlink to the primary source is specified. All trademarks belong to their rightful owners, all materials to their authors. If you are the owner of the content and do not want us to publish your materials on our website, please contact us by email – [email protected]. The content will be deleted within 24 hours.
2In1Chromebookgadget updatepremiumpricedReviewtabletfirsttech boytech news
Share FacebookTwitterGoogle+ReddItWhatsAppPinterestEmail

From 3D printer to international catwalk

Xbox One Console Production Was Discontinued at the End of 2020