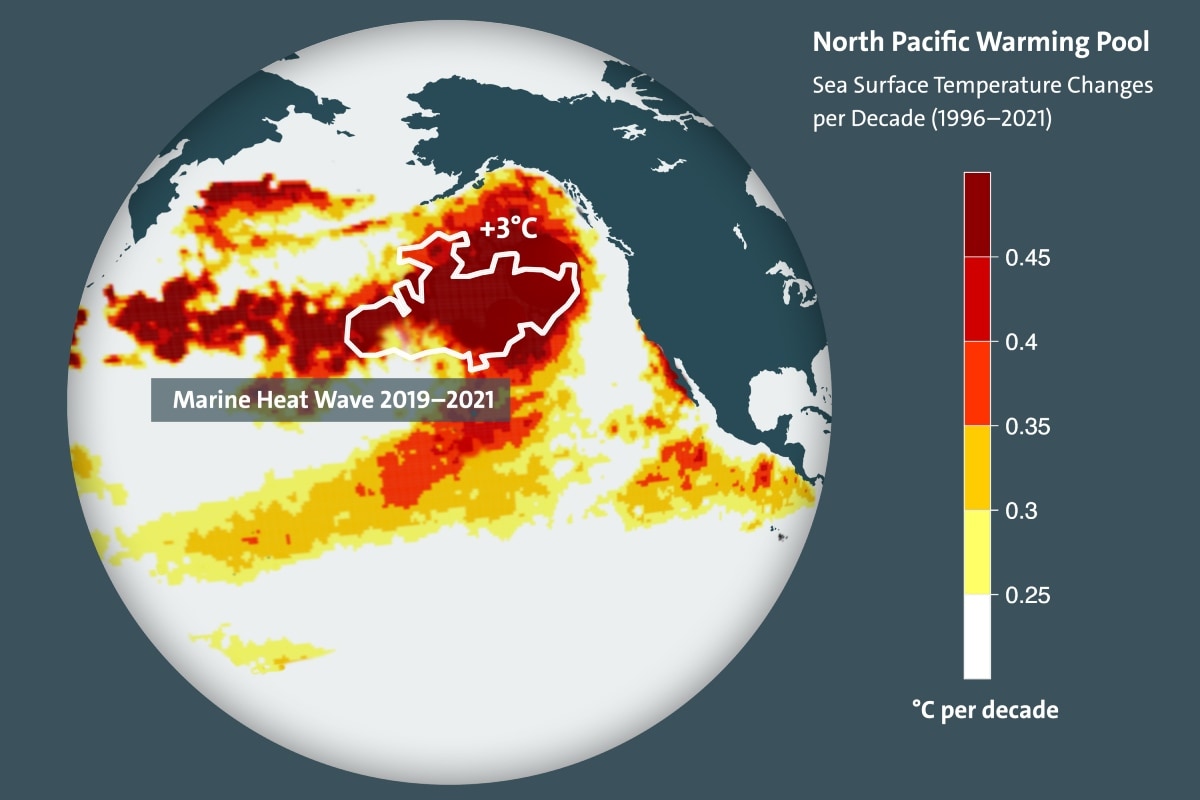 Scientists have revealed that human activity — and not natural climatic variations — is causing systemic warming in a pool of water present in the northeast Pacific Ocean. Temperatures in the pool of water have seen a rise of up to 3 degrees Celsius since 1996, according to the researchers. The 3 million square kilometre body has also witnessed an increase in marine heatwaves that destroys marine wildlife and the ecology, along with a rise in temperatures due to increased greenhouse gas emissions. These have also helped cause more extreme heatwaves, like the ones observed last year in Canada and the US.

“This warming pool will continue to increase the water temperature in the future, increasing both the frequency and intensity of local marine heatwaves. The sharp increase in average water temperature is pushing ecosystems to their limits,” said Dr. Armineh Barkhordarian, one of the authors of the study that was published in the journal Nature Communications Earth and Environment.

The body of warmed water has resulted in marine heatwaves that devastate aquatic wildlife and the ecology in the surrounding areas. One of these events — the Pacific Ocean Blob — struck in the years 2014-2015, resulting in seabirds and marine mammals dying in large numbers, the formation of toxic algal bloom, and declining marine productivity. As a result of the heatwave, the west coast of the US also faced extreme drought as climatic patterns were disturbed.

“More frequent and extreme marine heatwaves are a serious burden for affected ecosystems. This not only poses a tremendous threat to biodiversity; it can also push these marine ecosystems past a tipping point, after which they can no longer recover,” said Barkhordarian. “The discovery of the long-term warming pool will now provide us with crucial information on the likelihood of such extreme events in the future.”

The latest heatwave has continued for three years — from 2019 to 2021 — while producing average water temperatures 6 degrees Celsius higher than normal. With water temperatures in the pool increasing at a rate of 0.05 degrees Celsius per year for the last 25 years, summers now lasting over an entire month longer, and the pool cooling down less during the winters, more heatwaves are expected to follow.

Denial of responsibility! TechNewsBoy.com is an automatic aggregator around the global media. All the content are available free on Internet. We have just arranged it in one platform for educational purpose only. In each content, the hyperlink to the primary source is specified. All trademarks belong to their rightful owners, all materials to their authors. If you are the owner of the content and do not want us to publish your materials on our website, please contact us by email – [email protected]. The content will be deleted within 24 hours.
activityaquaticCausingcreatesecologygadget updategreenhouse gas emissionHuman
Share FacebookTwitterGoogle+ReddItWhatsAppPinterestEmail

Tech Companies Are Relinquishing Some Control of Online Ads to Users

The next Apple Watch you pick up might be manufactured in…

Half of Android users might switch to iPhone for better…