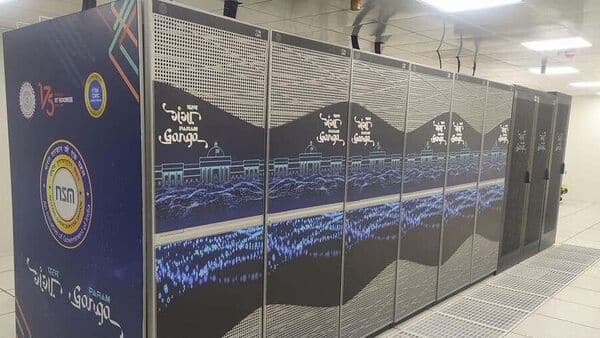 Supercomputers can accelerate calculations by providing exponentially larger computing power than regular machines. In May 2020, researchers at US Oak Ridge National Lab ran thousands of simulations to find drug compounds that could stop the covid-19 virus from infecting host cells. They completed the simulations in just 2-3 days using IBM’s Summit supercomputer.

“Supercomputers can be utilised for a large number of things in certain areas like chemistry formulations, protein folding, biomedicine. They can also be used in space for satellite placements, which are very, very difficult to solve with classical computers,” said Nikhil Malhotra, chief innovation officer at Tech Mahindra.

According to experts, building local supercomputing capabilities will strengthen high-quality research in biomedicine, space tech, and climate, which require high compute power. However, they also pointed out that the available computing power of Indian supercomputers is considerably lower than their global counterparts.

India’s first supercomputer, PARAM 8000, was set up in 1990. Param Siddhi, which offers a peak performance of 5.27 PFlops, had the distinction of being ranked as the 63rd fastest supercomputer in the world when it was launched in November 2020, according to the Top 500 global ranking service. It has since slipped to the 111th spot.

The computing power of a supercomputer is measured in floating-point operations per second, or FLOPS. One PetaFlops is equal to 1,000,000,000,000,000 (one quadrillion) FLOPS, or one thousand TeraFlops. The world’s fastest supercomputer, Frontier, located at the Oak Ridge National Laboratory, offers a peak performance of 1,685 PFlops.

“The baseline behind every supercomputer is faster performance. The world is moving to ExaFlops and we are still on PetaFlops,” said Preeti Syal, a tech policy expert, who used to work with Niti Aayog. “We are always two years behind. If we continue to play catch up we will always remain behind.”

Suryachandra Rao, project director at IITM, noted that leaders like China and the US are looking at exascale level computing and that is the next milestone that India also has to reach. However, he also pointed out that India faces a dual challenge of expanding the capability and also making such resources for more researchers and institutes. “It is a step in the right direction,” he said.

“At this moment the idea is to enable more people to use such resources. Ten years back, we used to have 1 or 2 systems. Now we are setting up at different locations. This will build capacities and allow more users to access it,” he added.

Rao said earlier weather and climate forecasts were the only priority. Now there are many other applications for supercomputing.

But in addition to having supercomputers, having the latest hardware is equally important. Syal noted that how India is making these supercomputers or the components used in them is also important to take their performance of supercomputers to the next level.

Building more cases is the next challenge for the NSM. Syal said currently the use cases are limited. “Globally, most of the usage comes from industry. What we are doing instead is letting research institutions drive it. They will never be able to think in terms of commercialization. These research institutions should also be linked directly to big industry players.”

Budget is another challenge. Rao said his institute is working on increasing the capacity of Pratyush. Though, he said, their requirement is at least 150 PFlops they will be able to get somewhere around 10-20 PFlops due to budget constraints.

Centre for Development of Advanced Computing (C-DAC) didn’t respond to Mint’s email query till the time of writing. A department of MeitY, C-DAC is responsible for designing, developing, and commissioning supercomputers under NSM.

Denial of responsibility! TechNewsBoy.com is an automatic aggregator around the global media. All the content are available free on Internet. We have just arranged it in one platform for educational purpose only. In each content, the hyperlink to the primary source is specified. All trademarks belong to their rightful owners, all materials to their authors. If you are the owner of the content and do not want us to publish your materials on our website, please contact us by email – [email protected]. The content will be deleted within 24 hours.
biomedicinecapabilitiesClimatefallfloating-point operations per secondgadget updateIndia SupercomputerIndias
Share FacebookTwitterGoogle+ReddItWhatsAppPinterestEmail

NASA’s Capstone Satellite Heads Towards Moon Ahead of Artemis Program

Realizing Opportunity at the Edge with a Distributed Cloud Database

Microsoft celebrates 15 years of OneDrive with a redesign and new…

Realizing Opportunity at the Edge with a Distributed Cloud…

Microsoft celebrates 15 years of OneDrive with a redesign…