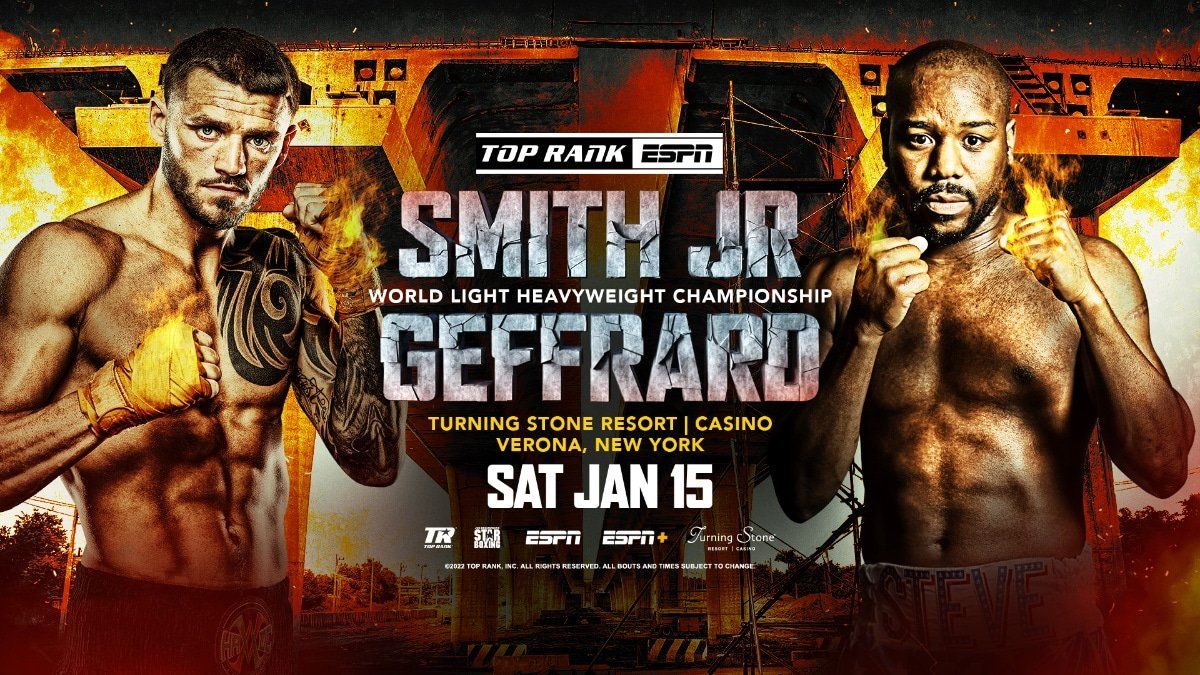 Joe Smith Jr. will be putting his WBO light heavyweight belt for the first time, as the native New Yorker finally steps into the ring tonight for his maiden title defence on home turf. Read on as we explain how to watch a Joe Smith Jr vs Steve Geffrard live stream today and catch all the boxing action online from anywhere in the world.

Smith claimed the WBO light heavyweight crown last April after defeating Maxim Vlasov via majority decision – a win that took his career record to 27-3 with 21 KOs.

The 32-year-old had been scheduled to face Umar Salamov as his first defence back in October, only for that date to be nixed after the Long Islander tested positive for Covid. Their rescheduled meeting was due to take place tonight, but Salamov was forced to pull out after failing to obtain a visa from his native Russia in time.

Callum Johnson was drafted in as Salamov’s replacement, but the British former 175-pound title challenger was also forced to drop out earlier this week after contracting coronavirus.

That means opportunity knocks for short-notice stand-in Steve Geffrard. The 31 year-old is unbeaten since 2013 with a 18-2 record that includes 12 knockouts, but his main credential coming into this fight appears to be his experience as a spar partner for unbeaten unified 175-pound beltholder Artur Beterbiev.

You can watch all of the action from New York unfold, no matter where you are, by following our guide below to watch a Smith Jr vs Geffrard live stream online from anywhere.

There are some great ways of watching Joe Smith Jr vs Steve Geffrard all over the world but you won’t be able to if you’re away from home and blocked from your usual service. To get round that, you need to use a VPN to dial into a country that’s showing the fight.

VPNs change your IP address making it appear that you’re in a  completely different location. Here’s how to get started.

How to watch Joe Smith Jr vs Steve Geffrard: live stream boxing in the UK

Can you watch Joe Smith Jr vs Steve Geffrard in Australia?

Sadly there’s no confirmed broadcaster for Joe Smith Jr vs Steve Geffrard in Australia at the time of writing. The only alternative is to use one of the best VPN service providers to tap into coverage from another nation, as described above.

The software is generally ideal for this as it allows you to change your IP address and appear to be in a completely different location – and all through a safe, encrypted connection. But do bear in mind that many paid streaming services do require a credit card based in the country the service is from.

Ring walks for the main event are roughly expected to be as follows.

Denial of responsibility! TechNewsBoy.com is an automatic aggregator around the global media. All the content are available free on Internet. We have just arranged it in one platform for educational purpose only. In each content, the hyperlink to the primary source is specified. All trademarks belong to their rightful owners, all materials to their authors. If you are the owner of the content and do not want us to publish your materials on our website, please contact us by email – [email protected]. The content will be deleted within 24 hours.
boxinggadget updateGeffrardJoeliveOnlineSmithSteve
Share FacebookTwitterGoogle+ReddItWhatsAppPinterestEmail

Emby vs Plex: Which media server is right for you?