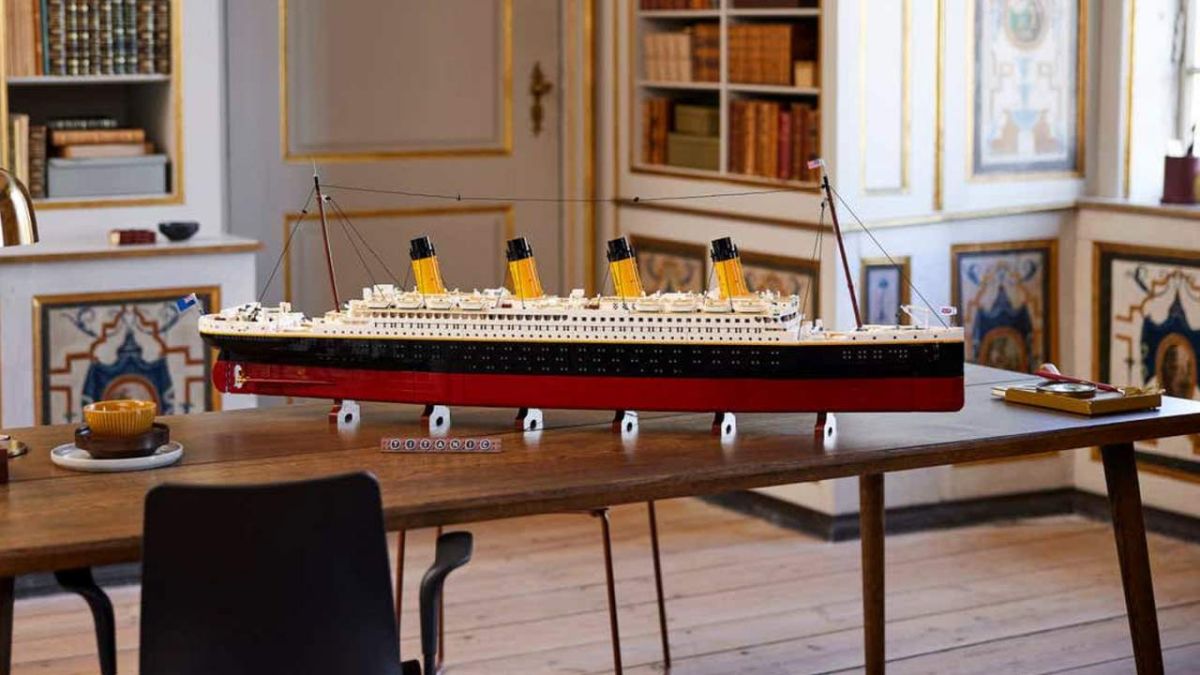 Lego’s Titanic, its largest ever set, might just be sturdier than the real thing

You can’t go and see the Titanic in all its glory today – for obvious reasons – but Lego might just have devised the next best thing. The company has developed an enormous 9,090-piece Lego set based on the Titanic, and you’ll be able to buy it very soon.

As reported by Kotaku, Lego’s Titanic releases on November 1 for – and get ready for this – $630 / £570. That’s arguably as eye-watering as the 1997 James Cameron film based on the ship’s demise.

If you do decide to take the plunge when the set releases, do make sure you’ve got plenty of time and shelf space. Its 1:200 scale, 54-inch size is almost as big as some of the best 4K TVs, and dwarfs the Lego Art World Map the company launched just a few months ago.

It might also be one of Lego’s most intricate builds to date, as its version of the Titanic features multiple floors, complete with furniture, as well as fully equipped engine rooms, a smoking lounge and swimming pool. There’s even a buildable iceberg for roleplay purposes. Not really.

However, the build is designed so that it can be split open seamlessly, which will reveal views of the interior. So it’s good to see Lego has considered that builders might want to show off the painstaking work they put into building this monolithic set.

For better or worse, the Titanic is one of the largest events in nautical history that’s captured the imaginations of millions of people around the world. That Lego would deem it fitting to base its largest ever set on is somewhat admirable, even if the build itself might potentially take months to complete.

It’s far from the first time Lego has based a set on a historical monument or feat of engineering, however. Its range of sets in the Architecture lineup feature famous buildings and skylines from all across the world, including the Taj Mahal, Tokyo and Trafalgar Square, to name just a few. These sets aren’t as detailed, grandiose or expensive as Lego’s Titanic, but they’re wonderful little tributes, nonetheless.

As for other historical Lego sets we’d love to see, the Lego Ideas website is chock full of inspiring pitches. Top of our list has to be this Angkor Wat idea, which sadly didn’t garner enough supporters for Lego to consider making a real set out of, which is a crying shame.

Elsewhere, this Hanging Gardens of Babylon pitch is utterly stunning, and something that would not at all look out of place stocked in one of Lego’s high street stores. The sky’s the limit when it comes to what Lego can do with an official set, we just wish it would roll the dice every so often to give budding creators like those linked above a chance to realize their incredible designs.

Denial of responsibility! TechNewsBoy.com is an automatic aggregator around the global media. All the content are available free on Internet. We have just arranged it in one platform for educational purpose only. In each content, the hyperlink to the primary source is specified. All trademarks belong to their rightful owners, all materials to their authors. If you are the owner of the content and do not want us to publish your materials on our website, please contact us by email – [email protected]. The content will be deleted within 24 hours.
gadget updatelargestlegosrealsetSturdiertech boytech news
Share FacebookTwitterGoogle+ReddItWhatsAppPinterestEmail

iPhone Battery Health Percentage Found to Be of No Use

Splunk wants to kick off the next generation of digital…