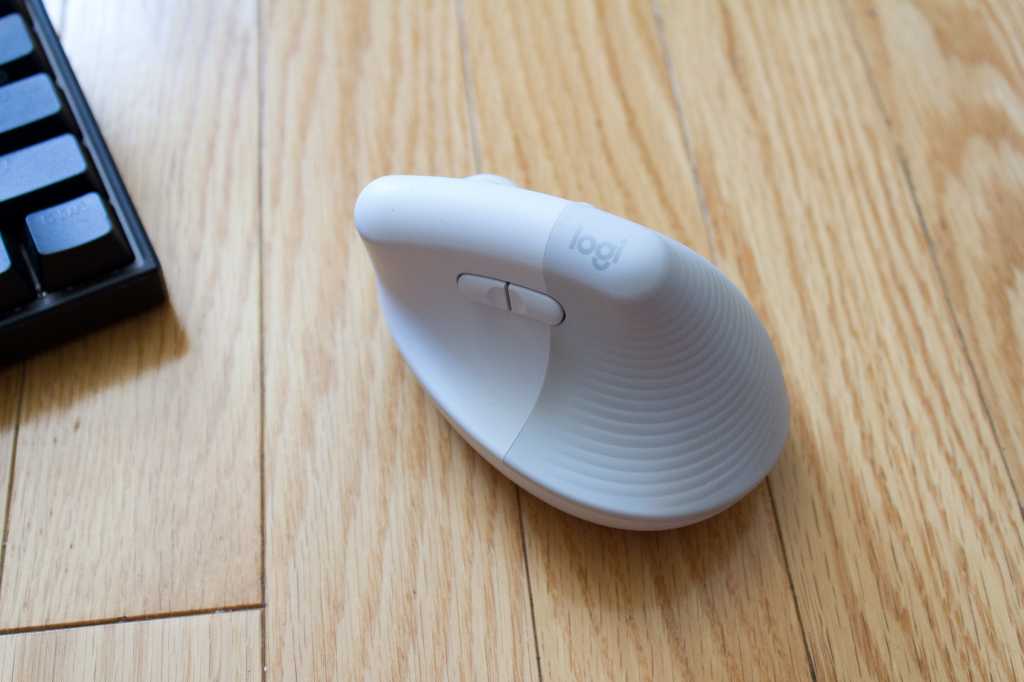 At $70, the Logitech Lift is an excellent affordable vertical wireless mouse for folks with smaller hands. It offers a comfortable grip, highly customizable buttons, and smooth tracking, and it’s lefty-friendly too. However, it’s best for people looking to prevent severe wrist and elbow pain during mouse use, rather than those hunting for a cheaper alternative to specialized ergonomic mice.

Ergonomic equipment can be expensive. I’ve cycled through many mice over the years—trackpads, trackballs, roller mice, vertical mice—with the price per mouse hitting over $100 for the more specialized gear. If you don’t work for a company that pays for it, taking care of your body costs a pretty penny.

The thing about ergonomic peripherals, though, is that everyone can benefit from it. Putting your body in a neutral position can save you from the kind of pain that forces you to seek out the expensive gear. It’s not just for people like me who must use funny-looking mice and keyboards (and regularly rotate through different styles, to boot) to keep from hurting.

So when Logitech announced the Lift, a $70 vertical mouse made for small-to-medium hands (with a left-hand variation available!), I was genuinely excited. These days, you can find inexpensive variations from companies like Anker, but they’re sized for people with larger hands. They also often don’t provide enough tilt to get your hand and elbow in a properly neutral position nor provide a left-hand variant. So far, the best options for a compact wireless vertical mouse have been the Evoluent VerticalMouse 4 Small Wireless ($110) or VerticalMouse D Small Wireless ($115).

Turns out, the Lift is a great balance between affordable and comfortable—but for folks like me, who already have existing issues, it can’t quite fully replace an Evoluent.

Note: This review is part of our best wireless mice roundup. Go there to learn more about the other wireless mice we’ve tested, and how this mouse compares to the competition.

For the full rundown of specs, including report rates, you can check out this Logitech Lift support page.

The Logitech Lift comes in a two-tone design, with a plastic front half in one color and a darker, rubberized back half in another color. You can get it in black, off-white, and rose; our review model was off-white, which had a cool-toned white front and a light gray palm grip. The plastic has a smooth but soft-touch satin finish, as opposed to slick and shiny. The effect overall is quite nice, but that’s only after just a few weeks of use. In general, I’m wary of rubberized materials—their longevity is questionable. Specific to mice, I stopped using my Evoluent VerticalMouse as often because its grip had deteriorated and become sticky to the touch.

Logitech offers six different buttons on this mouse—left and right click, plus a small round button just below those and two narrow ones on the thumb side of the mouse. The scroll wheel also serves as a button. You can customize the commands for all the buttons save the left and right click (for obvious reasons), which is done in Logitech’s Options+ software.

On the underside of the Lift is an on/off switch to preserve the mouse’s battery life, and a button to switch between connected devices (up to three total). You can connect to devices via Bluetooth or via the included 2.4GHz wireless dongle. A magnetic plate conceals access to the one AA battery that powers the mouse, as well as the 2.4GHz wireless receiver. It’s a good design choice—no plastic clips to accidentally break—but it pops off pretty easily even when the mouse drops onto carpet. (Shout-out to my jerk cat for taking it upon himself to test that repeatedly.)

One key difference exists between the Logitech Lift and its more expensive sibling, the MX Vertical—you can only connect to devices wirelessly. Unlike the MX, you can’t use a USB-C cable to operate in a wired mode.

The Lift’s feel in the hand is decent, with a good weight, though it borders on being being a smidge large. It flares a bit wider toward the base than feels completely comfortable. I prefer the sizing of my Evoluent vertical mouse, which has a narrower grip for curving my palm around. I also personally would prefer more of a vertical tilt—over time, I started to develop that familiar painful tightness near my elbow since the Lift doesn’t allow you to maintain a true handshake position. If you don’t have existing issues, you may not have the same complaint, but those with repetitive stress injuries and tendonitis may find the Lift won’t help with avoiding discomfort.

The button presses on this mouse feel a bit mushy—Logitech aimed for “whisper-quiet” button presses, which it achieves, but they don’t feel as good if you like crisp clicks for feedback. But the size of the buttons are a good proportion for narrower fingers.

First, a confession: I’m a savage who doesn’t use a mouse mat. (Though in full disclosure, my current ergo mouse is a Contour RollerMouse Free2, which doesn’t require movement on a desk surface.) But despite the lack of a mat and a slightly textured table surface, cursor tracking was very smooth with the Lift. I experienced no stutters or drop-outs while moving the mouse around the screen. You can change the tracking sensitivity (aka DPI settings) of the mouse very easily too, but be aware that upping the percentage doesn’t equate to linear increases in DPI. The following chart provided by Logitech shows the logarithmic scaling you’ll be working with.

Switching between connected devices is also seamless, with instant switching to the PC or tablet you want to control. For my testing, I was connected to three different PCs—two desktops and a laptop. The first and third were via Bluetooth, while the second was via the 2.4GHz wireless dongle.

Out of the box, the Logitech Lift works well, but it shines best when you install its companion app, Logi Options+. Within the program, you can change settings and customize the mouse.

Particularly useful is the ability to customize button presses for specific apps, not just general use. Logi Options+ will actually start you off with some presets for select programs already installed on your system, like Adobe Creative Cloud and popular Microsoft Office apps, Chrome, and Zoom. You can set up other apps in this way, too, as well as change the preset button presses. For example, in Chrome, I have one of the thumb buttons programmed for the keyboard shortcut for word count in Google Docs.

If you move between computers often, you can choose to save the settings to a cloud-based account, which will allow you to download them elsewhere quickly. Logi Options+ also lets you set up Logi Flow, which allows you to seamlessly copy and paste between two different PCs.

For the most part, the customizations are great both in execution and their flexibility, though I did discover one small, odd quirk. As one of my general-use customizations, I chose to load the Calculator app in Windows…but it kept loading in the background when I’d press the button. I had to set up a manual customization and navigate to the same .exe file for it to work properly.

Logitech Lift: Should you buy it?

At $70, the Logitech Lift is an affordable small wireless vertical mice also friendly to left-handed folks. It stacks up well against rivals made by manufacturers that specialize in ergonomic gear, with smooth tracking and two types of connectivity. It also comes with a slick software interface and a lot of customization possibilities. However, because of its design, the Lift is better suited for people experiencing minor discomfort using regular mice or those looking to avoid ever developing such problems. Such folks will save a decent chunk of cash—and they’ll also end up with a mouse that has (shall we say) more conventional color options.

Denial of responsibility! TechNewsBoy.com is an automatic aggregator around the global media. All the content are available free on Internet. We have just arranged it in one platform for educational purpose only. In each content, the hyperlink to the primary source is specified. All trademarks belong to their rightful owners, all materials to their authors. If you are the owner of the content and do not want us to publish your materials on our website, please contact us by email – [email protected]. The content will be deleted within 24 hours.
gadget updateLiftLogitechMassesmouseReviewsmallertech boy
Share FacebookTwitterGoogle+ReddItWhatsAppPinterestEmail