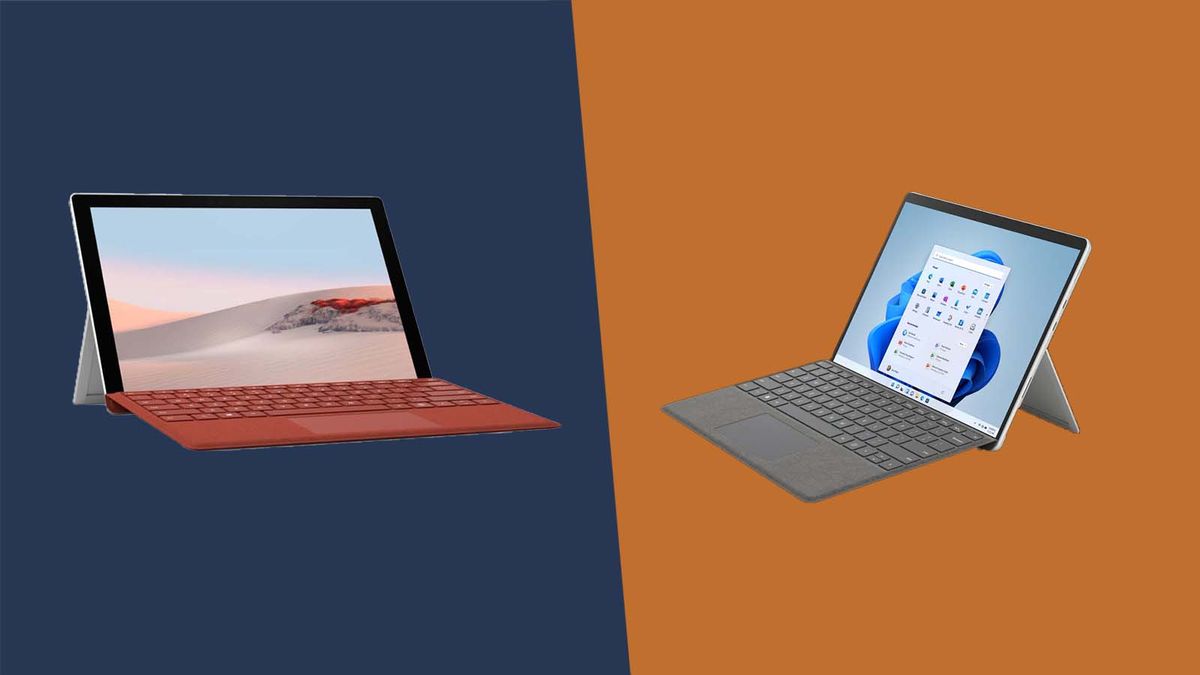 With the release of the Surface Pro 8, there are a lot of Surface Pro 7 owners who might be looking at their devices and wondering if its time for an upgrade.

Others might not have either device and want to know if the discounts we’re likely to see on the last-gen Microsoft Surface Pro 7 make it a more attractive purchase than the latest and greatest that Microsoft has to offer.

Whatever the reason, there are some important differences between the two devices that might not be obvious if you’re just looking at the basic spec sheet in the store or online.

Fortunately, we’re here to help you make sense of the the pros and cons of each device so you can pick between the two tablet computers and get the right model for your needs and budget.

The entry-level configuration comes with a tenth-gen Intel Core i3 i3-1005G1, 4GB RAM, and 128GB storage. The prices on the Surface Pro 7 steadily go up as you climb the spec tree. The other available configurations are as follows.

These were the specs that were available at launch, so availability of a particular model might vary from region to region or even city to city.

The Surface Pro 7 and Surface Pro 8 both run full versions of Windows, not S-mode, so it’s going to be more resource hungry than an S-Mode laptop or tablet, and while 4GB is considered the minimum standard amount of RAM you need for Windows 11, this is not going to be enough RAM, pure and simple.

For the Surface Pro 8, you can upgrade all the way up to an Intel Core i7, 32 GB RAM and 1TB SSD, which will cost $2,599 in the US. The top UK model is the same, only it tops out at 16GB RAM instead of 32, and that’s priced at £2,059. We haven’t heard about Australian availability or pricing yet, but we’ll update all our guides once we hear something, even unofficially.

The Surface 8 also has an extra 11% of screen real estate thanks to the slimmer bezels, making the whole device look much bigger than the Surface Pro 7.

There have also been updated ports with the new Surface Pro 8, including two new Thunderbolt 4 ports, a 3.5mm headphone jack and the Surface Connect port. It does lose the USB 3.0 Type-A port, which the Surface Pro 7 has, but this is first and foremost a tablet, so dropping the USB Type-A if the natural choice.

The screens on the Microsoft Surface Pro have always been one of the major wow factors for the product line, so you can rest assured that whichever model you ultimate decides on, you’re going to get a fantastic looking screen.

This applies to both Surface Pro 7 and Surface Pro 8, so whichever way you go, you’ll have to spend some extra money to get an actual computer, rather than just an overpowered tablet.

Ultimately, all of the Surface Pro 7 vs Surface Pro 8 talk can be boiled down to a pretty simply flow chart.

If you don’t need an especially powerful tablet-hybrid device and you want to save yourself a good bit of money, then the Microsoft Surface Pro 7 is definitely worth a look (except the entry-level Core i3, 4GB model, definitely avoid this model and go for an i5 with 8GB minimum.

If you’re looking for some more modern hardware that can start really taking on some of the kinds of creative and business oriented tasks traditionally reserved for full laptop systems, then the Microsoft Surface Pro 8 is definitely worth the investment.

Fortunately, both models are still available, so wherever you fall on the Surface Pro 7 vs Surface Pro 8 spectrum, there’s likely to be a Surface Pro product that will satisfy your needs and budget.

Denial of responsibility! TechNewsBoy.com is an automatic aggregator around the global media. All the content are available free on Internet. We have just arranged it in one platform for educational purpose only. In each content, the hyperlink to the primary source is specified. All trademarks belong to their rightful owners, all materials to their authors. If you are the owner of the content and do not want us to publish your materials on our website, please contact us by email – [email protected]. The content will be deleted within 24 hours.
gadget updateMicrosoftProsurfacetech boytech newstech news boytech update
Share FacebookTwitterGoogle+ReddItWhatsAppPinterestEmail

Microsoft to Shut Down LinkedIn in China

Virgin Media users can upgrade to new router with faster…