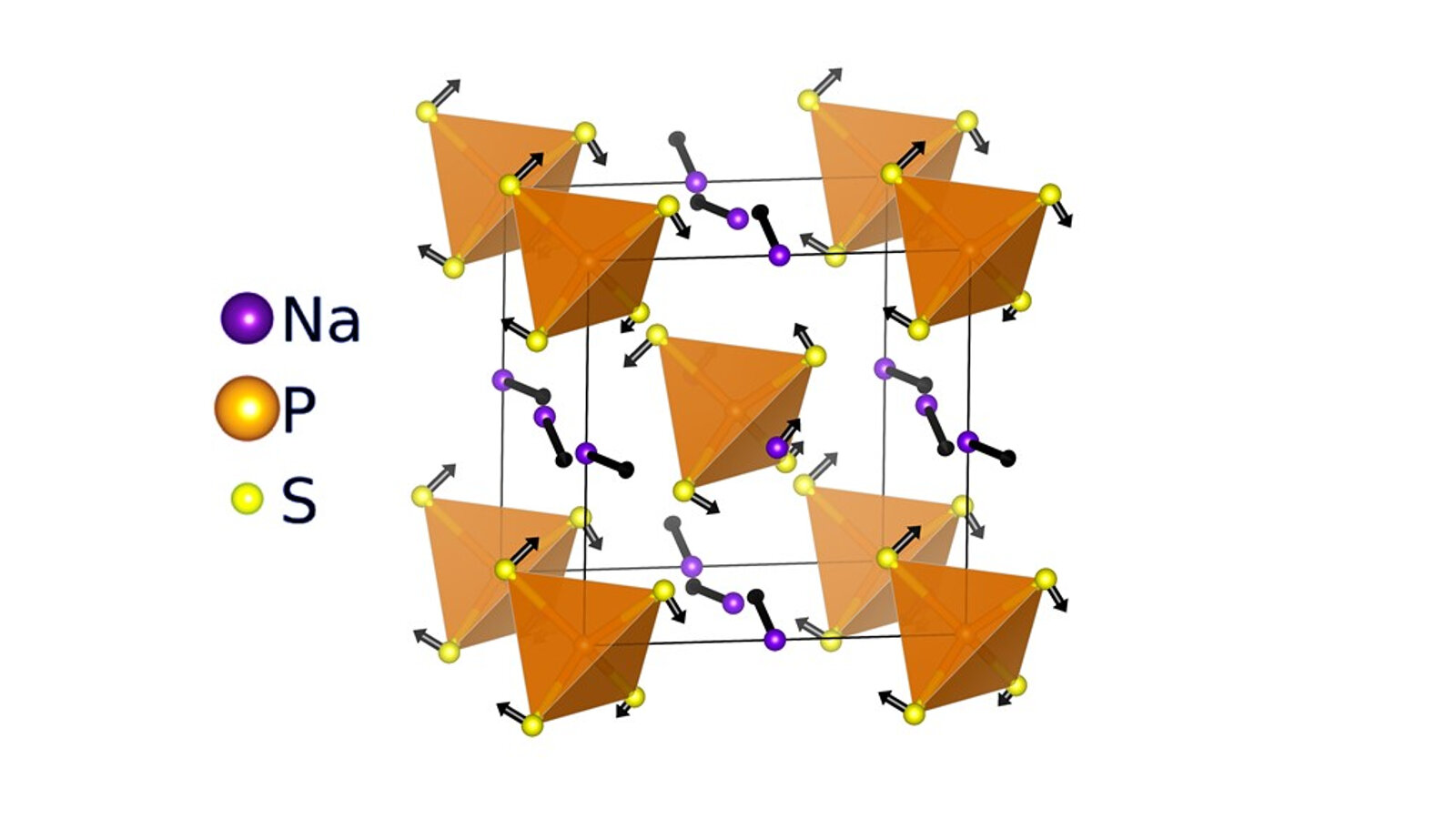 Materials scientists at Duke University have revealed paddlewheel-like molecular dynamics that help push sodium ions through a quickly evolving class of solid-state batteries. The insights should guide researchers in their pursuit of a new generation of sodium-ion batteries to replace lithium-ion technology in a wide range of applications such as data centers and home energy storage.

In general, rechargeable batteries work by moving electrons through external wires from one side to the other and back again. To balance this transfer of energy, atoms with an electric charge called ions, such as lithium ions, move within the battery through a chemical substance called an electrolyte. How quickly and easily these ions can make their journey plays a key role in how fast a battery can charge and how much energy it can provide in a given amount of time.

“Most researchers still tend to focus on how the crystalline framework of a solid electrolyte might allow ions to quickly pass through an all-solid battery,” said Olivier Delaire, associate professor of mechanical engineering and materials science at Duke. “In the last few years, the field has begun to realize that the molecular dynamics of how the atoms can jump around are important as well.”

For example, lithium ion batteries have a liquid electrolyte inside, that while extremely efficient at allowing lithium ions to travel quickly through, is also extremely flammable. As the market continues to grow exponentially, there are worries about being able to mine enough lithium from the relatively limited global deposits. And some of the rare earth elements used in their construction—such as cobalt and manganese—are even rarer and are only mined in a few locations around the world.

Many researchers believe that alternative technologies are necessary to supplement the skyrocketing demand for energy storage, and one of the leading candidates is sodium-ion batteries. While not as energetically dense or fast as their lithium-ion batteries, the technology has many potential advantages. Sodium is much cheaper and more abundant than lithium. The materials required for their constituent parts are also much more commonly available. And by replacing the liquid electrolyte with a solid-state electrolyte material instead, researchers can build all-solid batteries that promise to be more energy dense, more stable and less likely to ignite than currently available rechargeable batteries.

These advantages lead researchers to consider sodium-ion batteries a potentially viable replacement for lithium-ion batteries in applications that are not as constrained by space and speed requirements as thin smart phones or light electric vehicles. For example, large data centers or other buildings that require large amounts of energy over a long period of time are good candidates.

“This is generally a very active area of research where people are racing toward the next generation of batteries,” said Delaire. “However, there is not a sufficiently strong fundamental understanding of what materials work well at room temperature or why. We’re providing insights into the atomistic dynamics that allow one popular candidate to transport its sodium ions quickly and efficiently.”

The material studied in these experiments is a sodium thiophosphate, Na3PS4. Researchers already knew that the crystalline structure of the phosphorus and sulfur atoms creates a one-dimensional tunnel for sodium ions to travel through. But as Delaire explains, nobody had looked to see whether the movement of neighboring atoms also plays an important role.

To find out, Delaire and his colleagues took samples of the material to Oak Ridge National Laboratory. By bouncing neutrons off the atoms at extremely fast rates, researchers captured a series of snapshots of the atoms’ precise motions. The results showed that the pyramid-shaped phosphorus-sulfur PS4 units that frame the tunnels twist and turn in place and almost act as paddlewheels that help the sodium ions move through.

“This process has been theorized before, but the arguments are usually made in a cartoonish way,” said Delaire. “Here we show what the atoms are actually doing and show that while there’s a bit of truth to this cartoon, it’s also much more complex.”

The researchers confirmed the neutron-scattering results by computationally modeling the atomic dynamics at the National Energy Research Scientific Computing Center. The team used a machine learning approach to capture the potential energy surface in which the atoms vibrate and move. By not needing to recalculate the quantum mechanical forces at every point in time, the approach sped up the calculations by several orders of magnitude.

With the new insights into the atomistic dynamics of one sodium-ion electrolyte and the new approach to quickly modeling their behavior, Delaire hopes the results will help push the field forward more quickly, from Na3PS4 and beyond.

“Even though this is one of the leading materials because of its high ionic conductivity, there’s already a slightly different version being pursued that uses antimony instead of phosphorus,” Delaire said. “But despite the speed at which the field is moving, the insights and tools we present in this paper should help researchers make better decisions about where to go next.”

Denial of responsibility! TechNewsBoy.com is an automatic aggregator around the global media. All the content are available free on Internet. We have just arranged it in one platform for educational purpose only. In each content, the hyperlink to the primary source is specified. All trademarks belong to their rightful owners, all materials to their authors. If you are the owner of the content and do not want us to publish your materials on our website, please contact us by email – [email protected]. The content will be deleted within 24 hours.
batteriesgadget updateionsmolecularnextgenerationpaddlewheelspropelSodium
Share FacebookTwitterGoogle+ReddItWhatsAppPinterestEmail

Upskilling must be a global organizational imperative

Virgin Media customers get £200 to spend at Argos, Amazon or Tesco…

Upskilling must be a global organizational imperative