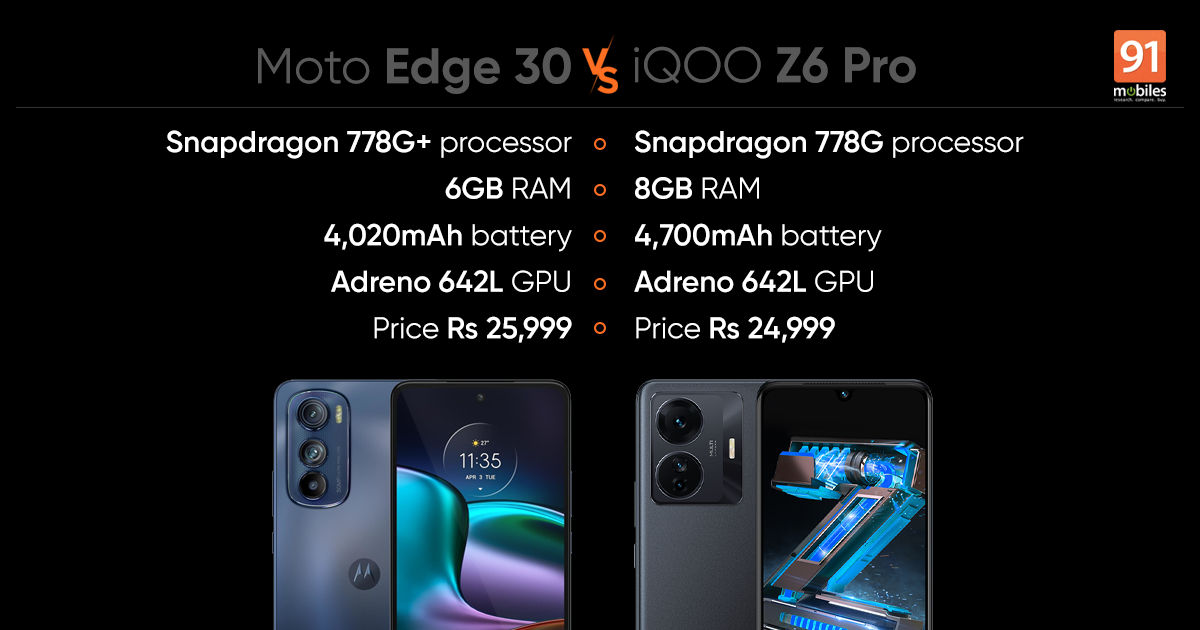 Motorola has revealed new smartphones under its flagship Edge series and like last year, one of them is a mid-range offering while the other is an affordable flagship. I have with me the Moto Edge 30 that retails for a starting price of Rs 25,999 and it comes with the new Qualcomm Snapdragon 778G+ SoC. The device has multiple things going for it, ranging from the 144Hz pOLED panel to the super-thin chassis. However, in this comparison, I want to see exactly how well the new Snapdragon 778G+ chipset, currently the best silicone from Qualcomm under the 700 series, fares against the regular Snapdragon 778G. For this, I have the recently-unveiled iQOO Z6 Pro (review) which costs about the same at Rs 24,999. Let’s get into the benchmarks and gaming comparison for a more detailed understanding of how much of a difference does the Snapdragon 778G+ make over the 778G. 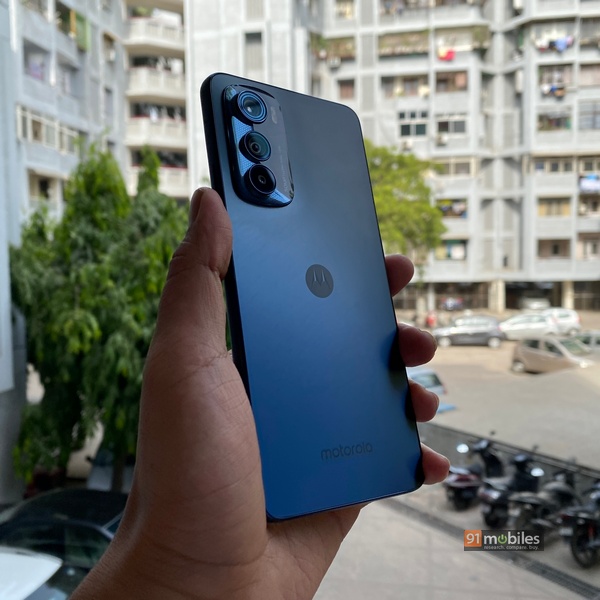 Before I begin, I believe it is important to preface that the Moto Edge 30 is the thinnest 5G capable phone on the market with a chassis height of just 6.7mm. This will invariably affect some of the performance since the thermal envelope for throttling is reduced. On top of that, the iQOO Z6 Pro has a very large vapour cooling chamber that should make it even more receptive to sustained load. Keeping that in mind, let’s begin the comparison.

First up on the list of synthetic benchmarks is Geekbench 5, a popular tool to quantify single-core and multi-core performance on a chipset. The Qualcomm Snapdragon 778G+ has only one difference as compared to the 778G which is that the Cortex A78 super core is clocked at 2.5GHz on the former whereas on the latter it is 2.4GHz. Running Geekbench 5, the Moto Edge 30 manages a healthy score of 822 on the single-core test and 2392 on the multi-core. For the iQOO Z6 Pro’s Snapdragon 778G the results are 726 and 2,879. It can be seen that the latter has a marginally better multi-core result while the former is slightly ahead on the single-core front. In terms of percentage, the iQOO Z6 Pro’s multi-core score is ahead of the Moto Edge 30 by about 17 percent.

Looking at Antutu results, there is more clarity of the chipset’s performance metrics since it also takes in GPU, memory and UX speeds. The overall result on the Moto Edge 30 is 535,201 while the iQOO Z6 Pro is slightly higher at 547,276. I ran the benchmark thrice on both devices and all three times the iQOO Z6 Pro wass able to beat the Edge 30’s score… but not by much. Averaging out the difference across the three times I ran Antutu, the Z6 Pro and Edge 30 can be considered equal. However, one thing to notice is that the Edge 30 lost about four percent battery and gained seven degrees while running the benchmark, while the Z6 Pro lost only three percent battery and gained just two degrees. As I said before, this is most likely due to the better thermal design on the Z6 Pro as compared to the Edge 30.

Smartphones generally have a tendency to throttle down peak performance under sustained load so that the device doesn’t overheat. The CPU Throttle benchmark provides a decent visual representation of how much processing power is being cut down while running a specified amount of threads. For this test, I ran 20 threads for 30 minutes on both devices. The Moto Edge 30 was able to maintain about 71 percent of its peak performance, which seems to be below average. It seems especially low when compared to the iQOO Z6 Pro which was capable of maintaining 87 percent of its peak performance. I do believe that the Moto Edge 30’s slim nature leads to more throttling than necessary.

For more GPU-intensive tasks like mobile gaming, 3DMark is a reliable tool to judge the effectiveness of a smartphone. The Wild Life Stress test works by mimicking a game using Vulkan API on a 20-time loop. Based on it the application outputs a stability score among other things. The Moto Edge 30 gets a 99.4 percent stability rating alongside a best loop score of 2,844. For the iQOO Z6 Pro the figure is similar at 99.1 percent stability and a best loop score of 2,497. From this, it can be concluded that when it comes to heavy graphical utility, there is little to separate the two devices. However, while the Moto Edge 30 manages slightly better frame rates, it does make use of more battery life and gets slightly hotter.

Battelgrounds Mobile India is arguable the most popular gaming title in the Indian smartphone market and it is also quite graphically demanding. I generally judge a phone’s capability based on how well it can run the game in terms of maintaining frame rates and not getting too hot. As far as the graphics settings go, both devices can operate at the Extreme (60fps) frame rate option when graphics are set at Smooth. After being put through a 30-minute gaming session, the Moto Edge 30 got hot quickly with a temperature rise of 11 degrees and lost 8 percent battery. It did maintain a healthy 55-60 fps throughout. For the iQOO Z6 Pro the temperatures barely rose and the phone remained moderately cool in my hand. Battery dropped was about 6 percent and the frame rate was maintained at 60fps.

It looks like the Moto Edge 30 has some thermal limitations owing to its slim design, which prevent it from performing better than the iQOO Z6 Pro. Since the former happens to be the only phone harbouring the Snapdragon 778G+ SoC at the moment, it could be tough to make conclusions about the chipset’s performance. I’d want to wait till I can test out some more smartphones powered by this new chipset, but as of now, I can say it does come across as a capable SoC in the mid range.

Denial of responsibility! TechNewsBoy.com is an automatic aggregator around the global media. All the content are available free on Internet. We have just arranged it in one platform for educational purpose only. In each content, the hyperlink to the primary source is specified. All trademarks belong to their rightful owners, all materials to their authors. If you are the owner of the content and do not want us to publish your materials on our website, please contact us by email – [email protected]. The content will be deleted within 24 hours.
778Gcomparisonsedgegadget updategoodiqooiqoo z6 proMobiles
Share FacebookTwitterGoogle+ReddItWhatsAppPinterestEmail