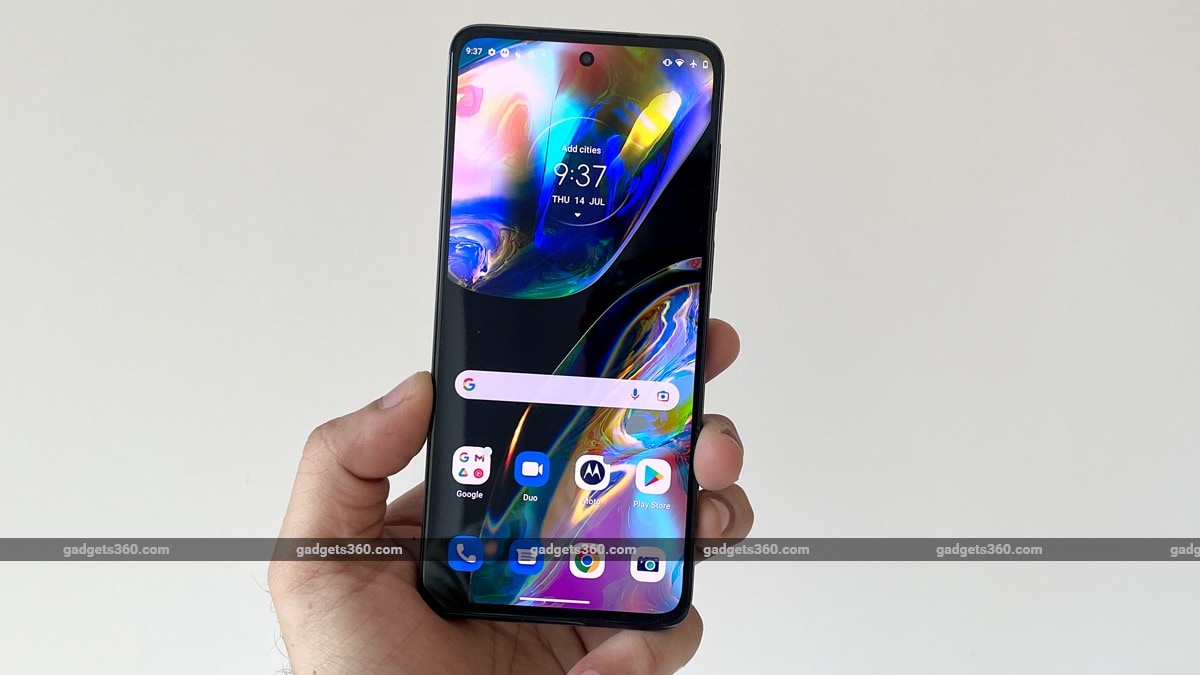 Motorola’s G series is expanding beyond the Rs. 20,000 price segment in India and the Moto G82 5G is the first phone commanding such a premium. It features a 120Hz pOLED display, stereo speakers, IP52 rating, and a 50-megapixel primary camera. Should you be paying a premium for these features or will you be better off saving money and buying a cheaper alternative? Here’s my review.

Motorola claims that the Moto G82 5G is the slimmest and the lightest smartphone in its segment. It looks like the phone has drawn some design inspiration from the Motorola Edge 30 (Review) which also makes a similar claim in its segment. The Moto G82 5G has a flattened plastic frame which is in line with the current design trend. Motorola has curved the edges of the phone, so they don’t dig into your palm when holding it.

The Moto G82 5G sports a 6.6-inch pOLED display which uses the same screen technology as the more expensive Motorola Edge 30. Motorola claims that the pOLED panel helps make the display thinner and keeps the bezel size down. The Moto G82 5G has a hole-punch cutout for the selfie camera.

Using the Moto G82 5G single handedly wasn’t cumbersome, and its 173g of weight did not cause fatigue. The phone sports a side-mounted fingerprint scanner and the volume buttons, both on the right side. While the power button was easy to reach, the volume buttons needed a little stretch of my fingers to reach while using the phone single handedly.

All the ports are at the bottom of the frame while the top only has the secondary microphone. The left side of the frame only has the SIM tray. The back panel looks like glass but it is actually made out of acrylic, which should be less prone to shattering in case of accidental drops. The camera module sits in the top-left corner and protrudes slightly from the rest of the back panel. Motorola has added its ‘batwing’ logo in the centre. Lastly, the Moto G82 5G has an IP52 rating which should make it splash resistant against liquids.

I found my Meteorite Grey unit to pick up fingerprints rather easily, which needed me to wipe the back of the phone quite often. Motorola does bundle a clear case in the box which helps alleviate this problem.

The Moto G82 5G is powered by the Qualcomm Snapdragon 695 octa-core SoC. Motorola is also using the same processor in the Moto G71 5G (Review) that we tested recently. Smartphones such as the Vivo T1 (Review) also offers the same SoC, albeit at a lower starting price. Like I mentioned before, you get two RAM variants but storage is the same at 128GB. The phone has a hybrid SIM slot, so storage expansion will cost you the use of a second SIM card.

The Moto G82 5G supports Bluetooth 5.1, dual-band Wi-Fi, 13 5G bands, and dual-4G VoLTE. The 6.6-inch display sports a full-HD+ resolution with a 120Hz refresh rate and a 360Hz touch sampling rate.The Moto G82 5G also has stereo speakers with support for Dolby Atmos. The phone packs a 5,000mAh battery that is capable of 30W fast charging, and Motorola has bundled a 33W TurboPower charger in the box.

The Moto G82 5G runs Android 12 out of the box with Motorola’s custom MyUX interface on top. Motorola hasn’t gone too far customising the user interface and it is similar to stock Android. My unit was running the April 2022 Android security patch at the time of this review. Motorola guarantees an update to Android 13 and three years of security updates. Assured updates are always welcome, as long as these happen in a timely fashion.

Motorola has managed to keep bloatware in check and it only has the Facebook app preinstalled, which can be easily uninstalled. The UI does offer theming options via the Moto app. This app also has Moto Actions that allow you to control different aspects of the smartphone such as the camera and flashlight, using gestures.

The Moto G82 5G could handle my daily usage without any lag or stutter. I was able to multitask easily on my review unit with 6GB of RAM. App loading times were within acceptable limits. The display had good viewing angles and it did get bright enough outdoors. Watching videos felt engaging and the stereo speakers helped offer an immersive experience. Those looking for a media consumption device will definitely find the Moto G82 5G interesting.

The Moto G82 5G did post some decent numbers in benchmark tests. In AnTuTu, it managed to score 404,838 points. In Geekbench 5, it managed 657 points and 1929 points in single-core and multi-core tests respectively. The Moto G82 5G scored decently in 3DMark’s Slingshot benchmark, scoring 4031 points. In GFXBench, the Moto G82 5G managed 17fps in the Car Chase benchmark. These scores were similar to the Moto G71 5G and the Vivo T1 (Review), however the iQoo Z5 (Review) is still one of the most powerful smartphones in this price range with its Qualcomm Snapdragon 778G SoC.

Gaming performance was good and the Moto G82 5G could run Call of Duty: Mobile well at the ‘High’ graphics setting with ‘High’ frame rate. The game was playable at these settings without any lag or stutter. I played the game for 20 minutes and it resulted in a six percent drop in battery level. The smartphone did get slightly warm to the touch but nothing too alarming.

Battery performance was good for my usage which included using Instagram, watching YouTube videos, taking a few calls and surfing the web. The Moto G82 5G lasted for over a day with this sort of usage. In our HD video loop test, the phone managed to run for 16 hours and 13 minutes. The big 5,000mAh battery charges quickly with the bundled 33W charger, going up to 42 percent in half an hour, and it took a little over an hour to charge completely.

The Moto G82 5G sports a triple camera setup consisting of a 50-megapixel primary camera with optical stabilisation (OIS), an 8-megapixel ultra-wide-angle camera, and a 2-megapixel macro camera. For selfies, it has a 16-megapixel selfie camera. The camera app is feature-packed and is easy to use. You can easily swipe left or right on the viewfinder to change camera modes. It has quick toggles for HDR which helps in bright scenes and auto-Night Vision which automatically kicks in low-light conditions.

With monsoons in full swing in Mumbai, most of the photos I shot with the Moto G82 5G were in overcast conditions. Daytime photos had good details and objects nearby were recognisable. The phone enabled HDR automatically which helped improve the dynamic range in the output. Photos shot with the ultra-wide-angle camera had the same colour tone but did not offer the same level of details.

Close-up shots were crisp and had accurate colours. The phone was also quick to lock focus and it did manage a soft bokeh for the background. Portraits had good edge detection and the phone did allow me to fine-tune the level of background blur in the output. Macro photos were decent. The phone also suggested switching between the primary and the macro camera based on the phone’s distance from the object.

Low-light camera performance was good and the phone automatically enabled Auto Night Vision to help capture a better image. It took about three seconds to capture a shot and it managed good details on objects nearby. Distant objects appeared soft but were still recognisable. Enabling Night Vision manually resulted in a brighter image with slightly better details.

Selfies from the Moto G82 5G were good in daylight as well as low-light conditions. Selfie portraits had good edge detection but the phone did apply a filter to smoothen the output. You do have the option to switch this off if you prefer a natural looking output.

Video recording topped out at 1080p for the primary as well as the selfie cameras. Stabilisation wasn’t the best I’ve seen and the footage did have jitter when walking around. The jitter in the footage was more prominent in low light. I was expecting good video stabilisation since the primary camera is equipped with OIS, but the output was below average.

The Moto G82 5G is the first G-series smartphone to cross the Rs. 20,000 mark, but it’s still priced well below Rs. 25,000 which isn’t a very crowded segment. Motorola has equipped it with a crisp display, stereo speakers and made it splash resistant in an effort to distinguish it from the competition. The Moto G82 might appeal to those who are willing to stretch their budgets beyond Rs. 20,000 for its features.

However, if you are willing to spend a little more than the Moto G82 5G’s asking price, phones like the Realme GT Master Edition (Review) and the iQoo Z5 (Review) offer significantly better performance. Those looking for good cameras should consider the Realme 9 Pro+ (Review), which also offers better video recording performance. If you wish to spend less but want similar features as the Moto G82 5G, you can also consider affordable alternatives such as the Moto G71 5G (Review) and the Vivo T1 (Review).

Denial of responsibility! TechNewsBoy.com is an automatic aggregator around the global media. All the content are available free on Internet. We have just arranged it in one platform for educational purpose only. In each content, the hyperlink to the primary source is specified. All trademarks belong to their rightful owners, all materials to their authors. If you are the owner of the content and do not want us to publish your materials on our website, please contact us by email – [email protected]. The content will be deleted within 24 hours.
BudgetG82gadget updateMotomoto g82 5gmoto g82 5g camerasmoto g82 5g price in indiamoto g82 5g price in india review flipkart buy motorola motorola
Share FacebookTwitterGoogle+ReddItWhatsAppPinterestEmail

The best laptops for gaming and schoolwork

How to unlock an iPhone if you forgot the passcode

iPhone 14 event has a date set in stone. Three sources can’t be…

iPhone 14 event has a date set in stone. Three sources…