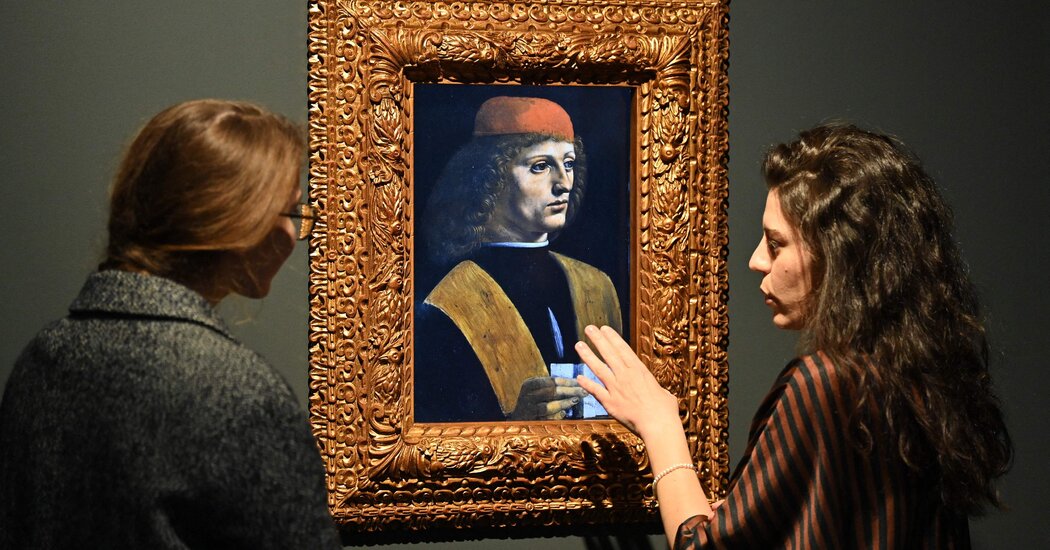 Museums Are Cashing In on NFTs

LONDON — “To wake up to one of these things is pretty special — to have a Leonardo at home,” said Joe Kennedy, the director of the contemporary art dealership Unit London, enthusing recently about an elaborately framed LED screen with a digital replica of Leonardo da Vinci’s “Portrait of a Musician” glowing on his gallery wall. The original was 800 miles away in the Ambrosiana museum in Milan.

The Leonardo was one of six ultra-high-resolution copies of famous paintings from across the centuries in Unit’s moodily lit “Eternalizing Art History” exhibition, which closed on Saturday. The show was the latest attempt by cash-poor museums to generate money by selling nonfungible tokens, or NFTs. Last year, NFTs, usually pegged to the high-flying but volatile Ethereum cryptocurrency, took the market for art and collectibles by storm, with sales estimated in the tens of billions.

Pandemic-related lockdowns and reprioritized government spending have put the world’s public museums under financial pressure. Yet so far, despite the formidable sales figures being achieved by NFTs, few institutions have explored this digital asset as a fund-raising mechanism.

Same-size digital versions of the Leonardo portrait, Caravaggio’s “Bowl of Fruit” (also in the Ambrosiana) and Raphael’s “Madonna of the Goldfinch” (in the Uffizi in Florence) were offered in editions of nine, ranging in price from 100,000 euros to €500,000 per piece (around $110,000 to $550,000). Fifty percent of sales proceeds went back to the licensing museums.

By the Friday after the show closed, seven sales had been confirmed up to €250,000, which included at least one of the Leonardo NFTs.

The collaboration between Unit and the Italian museums follows earlier attempts by other European institutions to get on the NFT bandwagon. Among those are the State Hermitage Museum, in St. Petersburg, Russia, which last September held an auction of NFT replicas of five of its best-known paintings that raised $444,000.

The Belvedere museum in Vienna has fractionalized the digitized image of Gustav Klimt’s “The Kiss” into a one-off drop of 10,000 NFTs. This was released on Feb. 14, Valentine’s Day, priced at 0.65 Ethereum, or €1,850, each. Earlier this week, Irene Jaeger, a media relations officer at the Austrian museum, said around 2,400 of these Klimt NFTs had been sold, generating about €4.3 million.

Producing NFTs uses a lot of energy, particularly on the Ethereum blockchain. According to one estimate, the computing power required to mint one NFT generates the same amount of greenhouse gas as a 500-mile journey in a gasoline-powered car. Nonfungible tokens can make money for a museum, but they also have the potential to create image-damaging environmental issues.

A more eco-friendly offering of 50 NFTs based on a William Blake print, individually priced at 999 units of the “green” cryptocurrency tezos (about $3,290 at current values), has so far attracted eight sales for the Whitworth museum in Manchester, England, since its release in July, according to Bernardine Brocker Wieder, the chief executive of Vastari, the project’s technical partner.

Environmental issues are one reason barely a dozen museums have so far experimented with NFTs as an alternative revenue stream. The instability and opacity of unregulated cryptocurrencies, the difficulty of finding trusted tech partners and the cost of such partnerships are also cited by museum professionals as reasons for hesitancy.

“American museums are nonprofit organizations that work in the public trust,” said Tina Rivers Ryan, a curator specializing in digital art at the Albright-Knox Art Gallery, in Buffalo. “This means that legally and morally they are bound to move slowly.”

Ryan added, however, that many American museums are currently having internal discussions about how NFTs might be incorporated into their mission. “The market is changing so rapidly,” she said. “There are legal, environmental and other ramifications that have to be thought about very carefully.”

One institution that has wasted no time in embracing NFTs as a fund-raising tool is the British Museum in London. Chaired by George Osborne, a former British finance minister, the museum entered into an exclusive five-year partnership in September with the Ethereum-based NFT platform LaCollection. The museum has since made several token drops, in editions varying in size from two to 10,000, using digital copies of works by Katsushika Hokusai and J.M.W. Turner. Prices ranged from $500 to $40,000.

Aware of the environmental sensitivity of large-scale token drops, LaCollection said on its website that “for each minted NFT, we plant a tree” that “more than offsets” the activity’s carbon footprint.

Last month, sales reached “seven figures,” said Sophie Reid, spokeswoman for the project, in an email. The British Museum itself declined to comment.

Suse Anderson, an assistant professor of museum studies at George Washington University, said she was skeptical about museums becoming involved in the mania for NFTs. “It risks being a gimmick rather than focusing on the work itself. We should be making resources as available to the public as we can,” Anderson said.

Yet she acknowledged that there was currently a market for NFTs from museums. “It may not last long, but this is a moment where there is a possibility for fund-raising and visibility,” she said.

At the moment, that market is relatively small. Publicly funded galleries are wary of cryptocurrencies, and, for those immersed in that world, digitalized old art doesn’t have the speculative cool of “native” NFTs, like CryptoPunks or Bored Apes, which can sell for millions. As yet, no museum NFTs have achieved attention-grabbing profits on resale platforms, such as OpenSea.

But what if the reproduction of a masterpiece is so good it looks just like the original, hanging in a beautiful frame on a wall? Don’t those have the potential to sell for millions, or at least hundreds of thousands?

On the final day of the Unit “Eternalizing Art History” show, Eve Smith, a lawyer, seemed impressed. “This is the second time I’ve been. I was completely astonished,” said Smith, gazing at a backlit ultra-high-resolution digital copy of Francesco Hayez’s 1896 painting of embracing lovers, “The Kiss,” in the Pinacoteca Brera museum in Milan.

“It looks like satin. It looks like there’s texture in what you’re looking at, but there isn’t,” Smith said. “Will I still want to go to the Brera? Of course.”

But would she be prepared to pay Unit London’s asking price of €180,000 to own one of the edition of nine, plus its NFT?

“It depends how much you like repro,” Smith said.

Denial of responsibility! TechNewsBoy.com is an automatic aggregator around the global media. All the content are available free on Internet. We have just arranged it in one platform for educational purpose only. In each content, the hyperlink to the primary source is specified. All trademarks belong to their rightful owners, all materials to their authors. If you are the owner of the content and do not want us to publish your materials on our website, please contact us by email – [email protected]. The content will be deleted within 24 hours.
cashinggadget updatemuseumsNFTstech boytech newstech news boytech update
Share FacebookTwitterGoogle+ReddItWhatsAppPinterestEmail