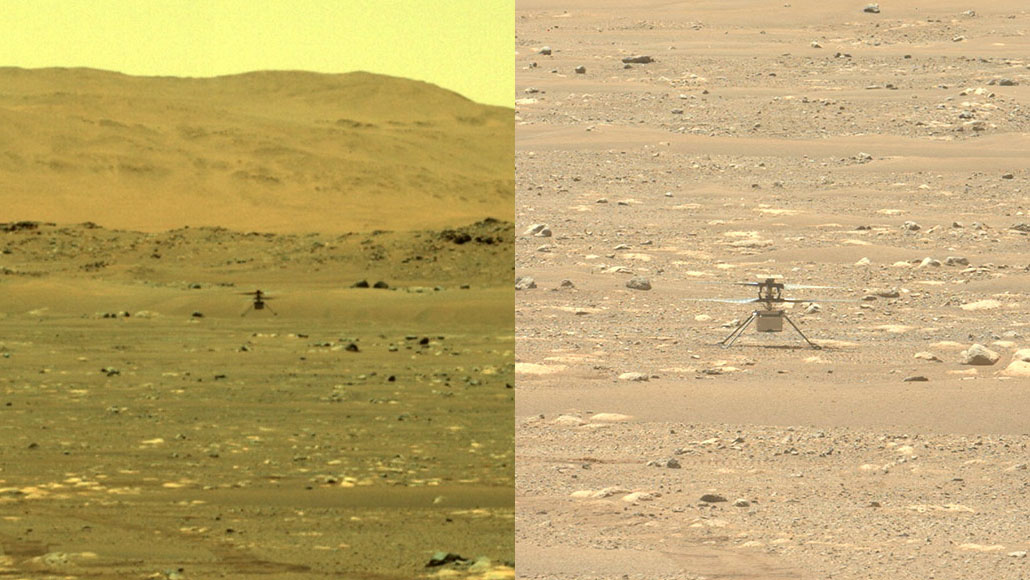 NASA’s Ingenuity helicopter made history by flying on Mars

Editor’s note: This story has been updated with details of Ingenuity’s second and third flight.

A helicopter just flew on Mars. NASA’s Ingenuity hovered for about 40 seconds above the Red Planet’s surface, marking the first flight of a spacecraft on another planet.

In the wee hours on April 19, the helicopter spun its carbon fiber rotor blades and lifted itself into the thin Martian air. It rose about three meters above the ground, pivoted to look at NASA’s Perseverance rover, took a picture, and settled back down to the ground.

“Goosebumps. It looks just the way we had tested it in our test chambers,” Ingenuity project manager MiMi Aung said in a news briefing after the flight. “Absolutely beautiful flight. I don’t think I can ever stop watching it over and over again.”

As data from the flight started coming in to Ingenuity’s mission control room at NASA’s Jet Propulsion Lab in Pasadena, Calif., at about 6:35 a.m. EDT, a hush fell. And then cheers erupted as Håvard Grip, Ingenuity’s guidance, navigation and control lead, announced: “Confirmed that Ingenuity has performed its first flight, the first flight of a powered aircraft on another planet.”

The flight, originally scheduled for April 11, was delayed to update the helicopter’s software after a test of the rotor blades showed problems switching from preflight to flight mode. After the reboot, a high-speed spin test April 16 suggested the shift was likely to work, setting the stage for the April 19 flight.

“I never let you celebrate fully. Every time we hit a major milestone I’m like, not yet, not yet,” Aung told the team moments after the flight was confirmed. Now is the moment to celebrate, she said. “Take that moment and after that, let’s get back to work and more flights. Congratulations.”

This first-ever flight was a test of the technology; Ingenuity won’t do any science during its mission, set to last 30 Martian days from the moment it separated from the rover, the equivalent of 31 days on Earth. But its success proves that powered flight is possible in Mars’ thin atmosphere. Future aerial vehicles on Mars could help rovers or human astronauts scout safe paths through unfamiliar landscapes, or reach tricky terrain that a rover can’t traverse.

“Technology demonstrations are really important for all of us,” said Thomas Zurbuchen, associate administrator for NASA’s Science Mission Directorate. “It’s taking a tool we haven’t been able to use and putting it in the box of tools we have available for all of our missions at Mars.”

Ingenuity’s flight was the culmination of more than seven years of imagining, building, testing and hoping for the flight team.

“That is what building first-of-a-kind systems and flight experiments are all about: design, test, learn from the design, adjust the design, test, repeat until success,” Aung said in a news briefing on April 9.

Aung and her team began testing early prototypes of a Mars helicopter in a 7.62-meter-wide test chamber at JPL in 2014. It wasn’t a given that flying on Mars would even be possible, Aung said. “It’s challenging for many different reasons.”

Even though Mars’ gravity is only about one-third of Earth’s, the air’s density is about 1 percent that at sea level on Earth. It’s difficult for the helicopter’s blades to push against that thin air hard enough to get off the ground.

Another way to think about it is that the air is thinner on Mars than it is at three times the height of Mount Everest, Ingenuity engineer Amelia Quon of JPL said in the news briefing. “We don’t generally fly things that high,” Quon said. “There were some people who doubted we could generate enough lift to fly in that thin Martian atmosphere.”

So Quon and her team put the helicopter through a battery of tests over the course of five years. “My job … was to make Mars on Earth, and enough of it that we could actually fly our helicopter in it,” Quon said. The Mars simulation chamber could be emptied of Earth air and pumped full of carbon dioxide at Mars-like densities. Some versions of the helicopter were suspended from the ceiling to simulate Mars’ lower gravity. And wind speeds up to 30 meters per second were simulated by a bank of about 900 computer fans blowing at the helicopter.

The final version of Ingenuity is light, about 1.8 kilograms. Its blades are longer (about 1.2 meters wingspan) and rotate faster (about 2,400 rotations per minute) than a similar vehicle would need to be able to fly on Earth. By the time the helicopter hitched a ride to Mars with the Perseverance rover in July 2020, the engineers were confident the helicopter could fly and remain in control at Mars (SN: 7/30/20).

Perseverance landed in a region called Jezero crater on February 18 (SN: 2/22/21). The helicopter was folded up beneath Perseverance’s belly under a protective shield until March 21.

Over the next few weeks, Perseverance drove around to find a flat spot for Ingenuity to launch. Then Ingenuity slowly unfolded itself and was finally lowered gently to the ground beneath Perseverance on April 3. The rover drove away quickly to get Ingenuity out of its shadow and allow the helicopter to charge its batteries with its solar panel, giving it enough power to survive the freezing Martian night.

On April 8 and 9, Ingenuity unfolded its rotor blades and tested their ability to spin in preparation to take to the air. After trouble-shooting the software problem and retesting the rotor blades April 16, the flight got a green light for April 19. It was scheduled for roughly 3:30 a.m. Eastern Daylight Time on April 19, which corresponds to 12:30 p.m. Mars time, in the early afternoon. That gave the craft’s solar panel enough time to charge up its batteries for the flight. It was also a time when Perseverance’s weather sensors, called MEDA, suggested the average wind speed would be about six meters per second.

Ingenuity had to pilot itself through the flight. That’s partly because of the communication delay — Mars is far enough from Earth that light signals take about 15 minutes to travel between the two planets. But it’s also because Mars’ thin air makes the helicopter difficult to steer. “Things happen too quickly for a human pilot to react to it,” Quon said.

The team hopes to take up to four more flights over the course of Ingenuity’s mission. The second flight took place early on April 22. Ingenuity rose five meters into the air, tilted to fly two meters sideways, and spun around to take pictures of its surroundings before landing safely. On the third flight on April 25, Ingenuity flew farther and faster than ever before, even in tests on Earth. The helicopter rose five meters into the air and sped 50 meters horizontally, reaching two meters per second at top speed. The Perseverance rover filmed Ingenuity as it flew in and out of the rover’s field of view, then stuck the landing.

Each subsequent flight will be a little bit more daring and riskier. “We are going to continually push all the way to the limit of this rotorcraft,” Aung said in the April 19 news briefing. And each one will be a nail-biter: Just one bad landing could end things immediately. Ingenuity has no way to right itself after a fall.

That may be the way the mission ends, Aung admitted. “Ultimately, we expect the helicopter will meet its limit,” she said. Even if it eventually wipes out in a crash, the engineering team will learn valuable information from how the helicopter eventually fails.

At the end of Ingenuity’s mission, Perseverance will drive off, leaving the little helicopter that could behind, and continue its own mission: to search for signs of past life in Jezero crater, and to store rocks for a future mission to return to Earth.

Denial of responsibility! TechNewsBoy.com is an automatic aggregator around the global media. All the content are available free on Internet. We have just arranged it in one platform for educational purpose only. In each content, the hyperlink to the primary source is specified. All trademarks belong to their rightful owners, all materials to their authors. If you are the owner of the content and do not want us to publish your materials on our website, please contact us by email – [email protected]. The content will be deleted within 24 hours.
flyinggadget updatehelicopterhistoryIngenuityMarsNASAstech boy
Share FacebookTwitterGoogle+ReddItWhatsAppPinterestEmail