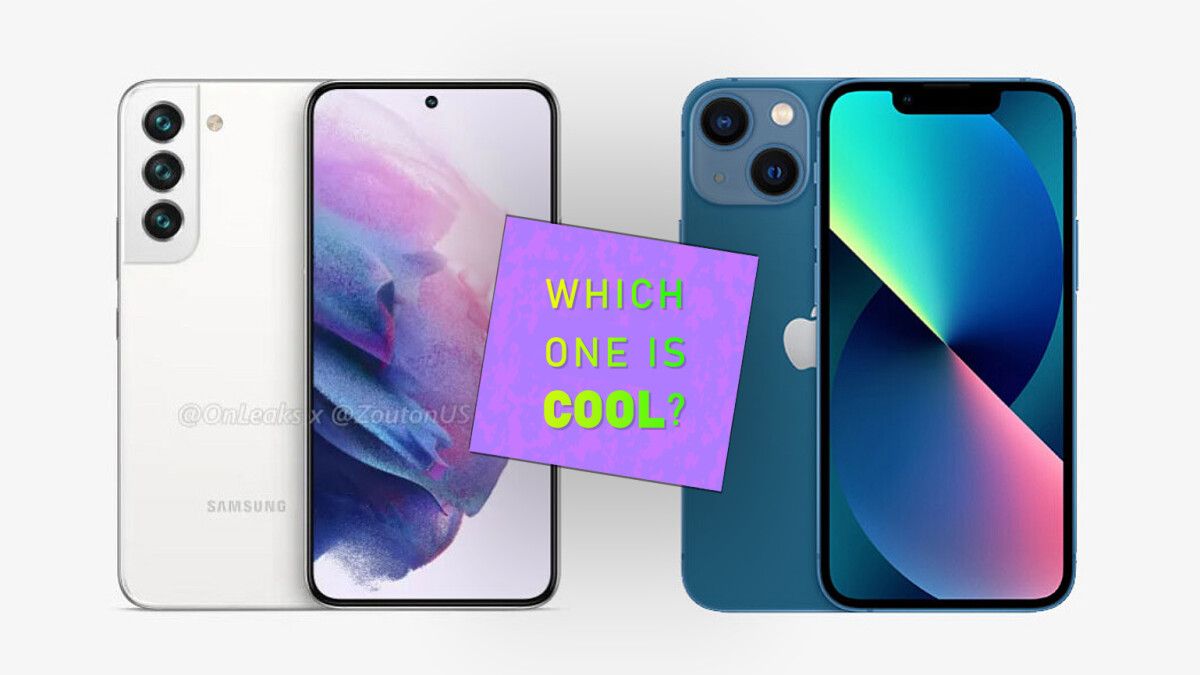 Nearly 90% of US teens choose iPhone: Will Galaxy S22 change anything?

Apple continues to be the smartphone brand US teens choose, well over any other. A recent survey that included 10,000 of them concluded that 87% are using an iPhone.

We should ask ourselves why exactly, and if there’s something Samsung can do, in order to make its flagships similarly desirable to the younger demographic. Could Samsung be missing an opportunity?

The Samsung Galaxy S22 series is just around the corner, likely to be released next month. Will it be attractive enough for the younger crowd?

From a marketing perspective, we know Samsung will go above and beyond to promote the S22 on banners and in ads across the globe. And from a design perspective, we can’t argue that the S22 is going to be a beautiful phone, supposedly to come in plenty of fun colors too, but is it as beautiful and as trendy as the iPhone 13?

Tech and phone enthusiasts generally love Samsung’s flagships, but I’ve never seen a young adult or a teenager proudly showcase theirs. What’s up with that? Well…

Apple has managed to position itself as a status symbol company, meaning flaunting an iPhone is seen by many, especially impressionable teenagers, as a sign of wealth, and belonging to a certain class of “trendy” people.

Samsung has attempted to release flashy phones with features like color-changing backs and curved displays, but as it stands I believe the Korean company’s only phones that can qualify as “status symbols” are the foldable Galaxy Z Fold 3 and even more so – the Galaxy Z Flip 3.

The latter seemingly has everything going for it – a unique, appealing and trendy design, a good bit of influencer advertising behind it, and last but definitely not least – an expensive price tag – so owning it not only makes you trendy, but one of an exclusive few who can actually afford (or are willing to pay) $1000 for a phone that’s not an iPhone.

Why is it okay to pay a lot for an iPhone? Well, whether it actually is or not is up to each individual buyer, but many people seem to accept its prices, as Apple is a huge American company, well-known as “the expensive one”, even if that’s not really the case anymore. And in fact, we could argue that Samsung is the more expensive brand now.

Samsung could use a cooler logo, should start giving out stickers too

Hear me out. Apple giving out stickers of its logo with every product is actually a genius move.But first, the Apple logo itself is incredibly timeless, minimalist and recognizable; the type of logo every company aspires to have nowadays.

Why is it important for a logo to be minimalist? Because the simpler a logo is, the easier it is to print, and the clearler it will look in any size, from near and afar, whether slapped on the back of a large laptop or on a tiny iPhone 13 mini.

Apple giving out stickers of its already iconic, ultra recognizable logo additionally triggers a sense of belonging in the user, an added sense of pride that they own something with an Apple logo.

Sticking that logo on anything in your home ensures that you won’t be forgetting about Apple anytime soon either, for as long as that object is in your house, even after the Apple product that the sticker came with is long gone. The more Apple can keep its logo in people’s homes and minds – the better for the company.

Now, Samsung has a good logo for refrigerators and what not, but to put on phones – we could use something other than the literal word “Samsung”. Last year my colleague Martin made the point that Samsung’s logo may be less magnetic than Apple’s and could use a refresher, and indeed – I agree. Check that article to learn more about the fascinating history of the Samsung logo, if interested.

But the fact is, in this past decade many major companies have updated and simplified their logos, and for good reason. Of course, Apple didn’t need to, as it was already perfectly simple and minimalist.

Simplicity is attractive and appealing. Where a basic logo that’s essentially typography, with one letter just slightly modified, be it the “A” in “Samsung” or the “E” in “Dell”… Well, that looks a bit too corporative, not exactly friendly, cool, and up with the times. Dell sells work laptops, so it’s fine there, but if Samsung wants to sell trendy phones to the young generation…

“Samsung” means “three stars” in Korean, so as an enthusiast graphic designer I can already think of several fun logos the company could fashion out of that concept.

Teens want what their friends have, and what they see in movies

Apple has managed to create a loyal fanbase not just because it’s offering great products that “just work” and are easy to use. Not just because of genius marketing that arguably convincingly overhypes the smallest of features. Not just because it’s been giving out stickers to its customers to stick everywhere and unknowingly advertise the company for free… But because Apple has enjoyed prevalence in American media for many decades.

For example, even as far back as the late 90s and early 2000s the colorful Apple iMac G3 was landing on many big movie sets, as the cool and colorful computer of both teen and adult characters alike.

Godzilla 2000, Mean Girls, Men in Black 2, Scream 3, What Women Want – those are just a few major films among the many that featured just this one Apple device. And what about the countless movies where someone whips out a laptop with a glowing Apple logo? This has a huge impact on the teens watching, even if they don’t realize it.

The Apple MacBook has starred in many, many hit movies, and continues to this day. Image credit – ProductPlacementBlog.com

And of course, let’s not underestimate Apple’s ability to create hype on its own. I still remember the iPad’s iconic introduction by Steve Jobs, but even in recent years we know what a splash the AirPods and Apple Watch made. Great advertising, plus kickstarting a new trend, featuring a device with a universally appealing design, that brings value to the people it’s meant for… It’s a win.

Everyone wants that cool thing that everyone wants. And yes, again – a simple design that has universal appeal helps sell products a great deal. Is the Galaxy S22 like that?

So we’ve established that, unfortunately, teenagers are very impressionable, and want to belong. They don’t want to be the person who’s out of the loop. If their “cool” friends and the online influencers they look up to are packing iPhones and constantly taking Instagram selfies where the Apple logo is even more prevalent than their own face, what kid will ask for a Galaxy S22? Sure, some teens are unique spirits, but Samsung needs to attract the majority. To make them turn their heads from the iPhone.

I’m a 90s kid. I saw an underdog, SEGA, come out of nowhere and crush an unstoppable force, Nintendo, on the home console market. It didn’t last long, but it was still a feat many considered virtually impossible.

But anything is possible – it just takes one cutting-edge and perfectly-marketed product for Samsung to trip Apple over while it’s dancing alone on the “trendy teen” scene.

We could argue again that the Samsung Galaxy Z Flip 3 is that product, or perhaps a future iteration of it could be. But the Galaxy S22 – most likely won’t be. Which is a shame, because…

That whole logo and sticker point was just one example of many, as to what Samsung can learn from Apple when it comes to marketing products to US teens in particular.

Product design and marketing aside, when it comes to features, I consider Samsung to be the king. Its flagship phones, including the upcoming Galaxy S22 series, offer more features than any iPhone, like Samsung DeX for example – it activates when you plug your phone into an external display – giving you an interface closer to Windows 11 than Android. So for the right kind of person, their phone can be their “PC”.

Granted, that’s exactly the kind of feature most teens are likely not to care about, instead tech enthusiasts like me would, so let’s take a look at some “mainstream-friendly” features we expect for the Galaxy S22.

The camera – it has been every modern phone’s greatest feature, especially since we all started living a second, digital life on the internet. Where taking pictures, videos and selfies is at the core of participating in every trendy social media app, and everyone is doing it.

So the camera is what most phone-makers, Samsung included, are strongly focused on improving each year, making it as desirable and marketable as possible, with big megapixel numbers and big features.

Both Apple and Samsung deliver a great deal of camera features, although teens arguably only need the basics – a camera that takes great videos and photos for social media with minimal effort, preferably no editing at all. And again, Samsung offers that, and will offer it on the S22.

But what I’m more concerned with now is the actual design of the Samsung Galaxy S22 camera module. And excitingly, at least the S22 Ultra has been rumored to feature a less intrusive camera module, or none at all, with minimal camera sensor bumps, as shown in the concept below.

In addition, by many accounts the Galaxy S22, S22+ and Ultra colors will also be quite exciting and attractive. Those would include both the obligatory (and most universal) black and white, but also gold, purple, beige, red, bronze, and more.

And thankfully, the phones’ backs are all expected to be made out of glass, not plastic (“glasstic”) like we saw on last year’s Galaxy S21.

Premium materials and premium looks are vital, after all, especially when a phone has a premium asking price.

In conclusion, the Korean company has some bold changes to consider.

Perhaps a rebrand, as its name is often associated with kitchen appliances, plus it would be a good opportunity for a new logo. Perhaps Galaxy S-series with even simpler and sleeker designs. Samsung’s done a lot in terms of software and features already, so a stronger focus on improving its products’ design appeal and its brand image in general might be in order.

But, what do you think Samsung can do in order to turn teenagers’ heads away from their iPhones? Remember – nothing is impossible – and with the Galaxy Z and S-series evolving each year, so can their universal appeal. Samsung can become the “trendy” brand to beat.

Denial of responsibility! TechNewsBoy.com is an automatic aggregator around the global media. All the content are available free on Internet. We have just arranged it in one platform for educational purpose only. In each content, the hyperlink to the primary source is specified. All trademarks belong to their rightful owners, all materials to their authors. If you are the owner of the content and do not want us to publish your materials on our website, please contact us by email – [email protected]. The content will be deleted within 24 hours.
changeChoosegadget updateGalaxyiPhoneS22tech boytech news
Share FacebookTwitterGoogle+ReddItWhatsAppPinterestEmail

A union election is moving forward at Amazon’s JFK8 warehouse

Apple is the world’s most valuable brand in 2022

Mortal Kombat Sequel Will Be Written by Moon Knight Scribe

A union election is moving forward at Amazon’s JFK8…