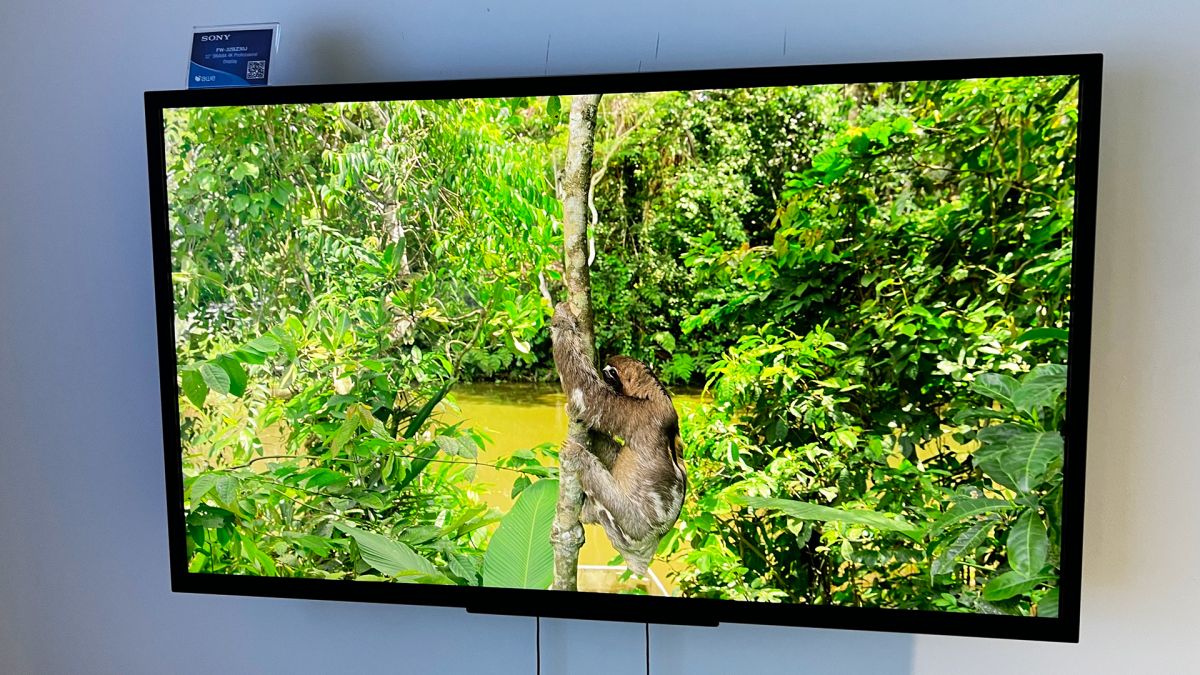 If you’re looking at the best 32-inch TVs today, you’ll quickly notice something – they’re basically all HD or Full HD, with 4K 32-inch TVs pretty much non-existent from the big brands.

There’s a reason for this, and we’ve gone in-depth on why 32-inch 4K TVs aren’t really thing before, but it largely boils down to the costs: 4K screens that small (like the ones used in 4K monitors) are expensive to produce, meaning that the end result costs as much as a 55-inch 4K TV. Most people would rather have the cheaper and lower-res version.

But not everyone. For some viewers who want a bedroom or office TV where they won’t sit too far away, a 32-inch 4K TV would be the dream… and there actually is an ideal model, from Sony. It’s just that even I – a professional whose job is to know about TV models – didn’t know it existed until stumbling on it at a custom installer show.

It’s called the Sony FW-32BZ30J, and it was released last year. The reason it hasn’t had much attention is that it’s technically part of Sony’s ‘Pro’ display line-up. But the tech in here is all from Sony’s regular TV for normal people, and that’s what makes it so exciting – and what makes it look so good.

Let’s start with the specs, which are way beyond what you get from other 32-inch TVs, even beyond the 4K resolution. As well as being Ultra HD, it supports Dolby Vision HDR, and the picture is powered by Sony’s X1 image processor, which is what’s used in the brand-new Sony X85K 4K TV, so you’re not getting cut-back tech here.

You also get four HDMI ports, which is basically unheard of on 32-inch TVs, plus there’s HDMI eARC support on one of them, for high-quality sound output to a soundbar (the Sonos Beam 2nd Gen would be the perfect match).

And the images look fantastic! It’s only an edge-lit panel, so don’t expect the deepest of contrasts, but that’s never stopped sets like the Samsung BU8500 from shining anyway. The colors are punchy and rich – I saw it next to the 42-inch Sony A90K OLED TV, and the difference between the premium new tech and this one really wasn’t that big.

And obviously the 4K screen at this size is incredibly sharp. Sony’s image processing helps with everything, but if you want ultra-crisp images at this size, then I don’t think anything else matches this – a 4K monitor lacks the image processing to help make sure compressed video looks its best, for example.

The downside? Well, there’s not much in the way of audio support – there’s no built-in Dolby Atmos decoding, for example, and you’ll want to use that HDMI ARC port to get detailed, powerful sound. It also doesn’t run Google TV like Sony’s other TVs, and so isn’t equipped with smart TV features, or a tuner – you’d want to add an Apple TV 4K or Amazon Fire TV Stick 4K Max or something. But that’s fine, because you’ve got loads of HDMI ports!

It’s also not really equipped for gaming – it’s a 60Hz screen, with no HDMI 2.1 features, and not even a gaming mode, so latency will be high.

But if you don’t have space for a bigger TV, that won’t help you. If you’re a picture-quality fiend (like me) who’d love to get premium images in a space where larger TVs literally won’t fit, then this could be the mini movie marvel you’re looking for. It seriously impressed me, and I wish it were more widely known, so I’m doing my part to help with that.

Denial of responsibility! TechNewsBoy.com is an automatic aggregator around the global media. All the content are available free on Internet. We have just arranged it in one platform for educational purpose only. In each content, the hyperlink to the primary source is specified. All trademarks belong to their rightful owners, all materials to their authors. If you are the owner of the content and do not want us to publish your materials on our website, please contact us by email – [email protected]. The content will be deleted within 24 hours.
32inchgadget updateSonystech boytech newstech news boytech updatetechnewsboy
Share FacebookTwitterGoogle+ReddItWhatsAppPinterestEmail