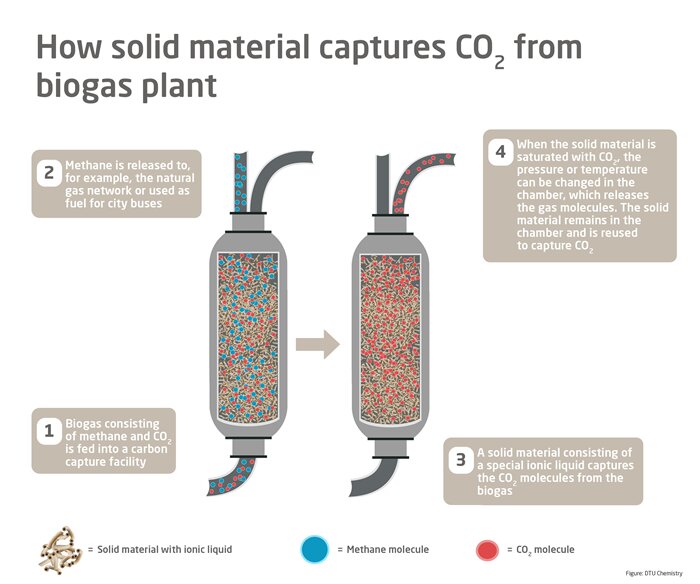 At Technical University of Denmark (DTU), for some time researchers have been researching and testing how to capture CO2 from flue gas from CHP plants or from biogas plants instead of just emitting it. The most widely used method is to capture the CO2 from the flue gas and channel it into a liquid. This is an efficient—but also highly energy-consuming—method.

Now researchers from DTU are ready to test a new and more energy-efficient method that can capture the CO2 in a solid material and upgrade it to a cleaner product, which can subsequently be used to produce—for example—fuels.

“We’ve been conducting research for several years aimed at finding a type of environmentally-friendly material that CO2 can bind to, but which—instead of being liquid—has a solid form, and where you can upgrade the captured CO2 using significantly less energy. We will be testing this in Sweden in autumn 2021 together with the company Wärtsilä, which supplies sustainable technologies to manufacturing industry,” says Professor at DTU Chemistry Anders Riisager, who heads the project.

The actual carbon capture unit with the new technology will be installed and tested as a demonstration project at one of Wärtsilä’s biogas plants, where it will purify part of the biogas produced.

“In slightly simplified terms, we install a solid material that has ionic liquid in its pores. The ionic liquid binds the CO2—and when the material has been saturated with CO2—the CO2 can subsequently easily be released through a combination of slight heating and lowering of the pressure. One of the key advantages of using an ionic liquid is that it does not evaporate into gas when it is heated or the pressure is lowered, and it therefore remains in the solid material, which can be recycled in the carbon capture unit. This avoids heating and pumping of excess liquid in the plant,” says Anders Riisager, and elaborates, “In the currently most widely used methods, the flue gas or biogas is passed through long pipes to a large quantity of liquid—typically water—which contains various additives that help absorb the CO2 in the liquid. Once the CO2 has been absorbed in the liquid, it has been captured. However, it’s quite energy-intensive because much heat needs to be supplied to release the CO2—which is strongly bound to the additives in the liquid—and a lot of waste heat is also used to heat the remaining liquid. We avoid this with the new method.”

Wärtsilä has a number of plans for the new carbon capture technology if it works as well in the real world as in the laboratory.

“For us, it’s about being right at the forefront of the development of new sustainable energy, and our plans are to use the methane from the biogas locally as fuel in urban buses, and in the long term, upgrade the CO2 to a pure product that can be used in, for example, aviation fuel,” says Lars-Evert Karlsson, Innovation and System Design Manager in Wärtsilä Biogas Solutions.

The researchers hope to be able to capture up to 90 percent of the CO2 from the biogas with an energy consumption that is less than half of that of the methods most commonly used today.

They will be testing the method for up to six months to see if the material continues to capture and release CO2 efficiently. Both the materials and the process have been patented.

“An additional advantage of capturing CO2 in a solid material is that it is a safer method, as you avoid having to handle liquid chemicals. This means that the method is also suitable for use by farmers in local biogas plants. A solid material does not require tankers or special measures to be handled,” says Anders Riisager, and continues, “The new method is well suited for small plants, and it’s also less expensive to establish and operate than the current technology, which is often only used in large central plants.”

He explains that if the new technology were to run using very large and diluted CO2 gas flows—such as in power plants—the plant would have to be quite large to be sufficiently efficient. With lower and more concentrated CO2 gas flows from—for example—biogas, a small plant works very efficiently.

Anders Riisager expects the demonstration plant in Sweden to yield good results, so that the technology can be extended to several small plants also in Denmark and thus become one of the methods contributing to carbon capture. In the long term, the technology can subsequently be included in the development of new green fuels, thus contributing to meeting the climate goals.

How the agricultural sector can capture and store CO2

Provided by
Technical University of Denmark

Denial of responsibility! TechNewsBoy.com is an automatic aggregator around the global media. All the content are available free on Internet. We have just arranged it in one platform for educational purpose only. In each content, the hyperlink to the primary source is specified. All trademarks belong to their rightful owners, all materials to their authors. If you are the owner of the content and do not want us to publish your materials on our website, please contact us by email – [email protected]. The content will be deleted within 24 hours.
Capturecarbongadget updateMethodResearcherstech boytech newstech news boy
Share FacebookTwitterGoogle+ReddItWhatsAppPinterestEmail

Realme UI 3.0 update: release date in India, how to apply,…