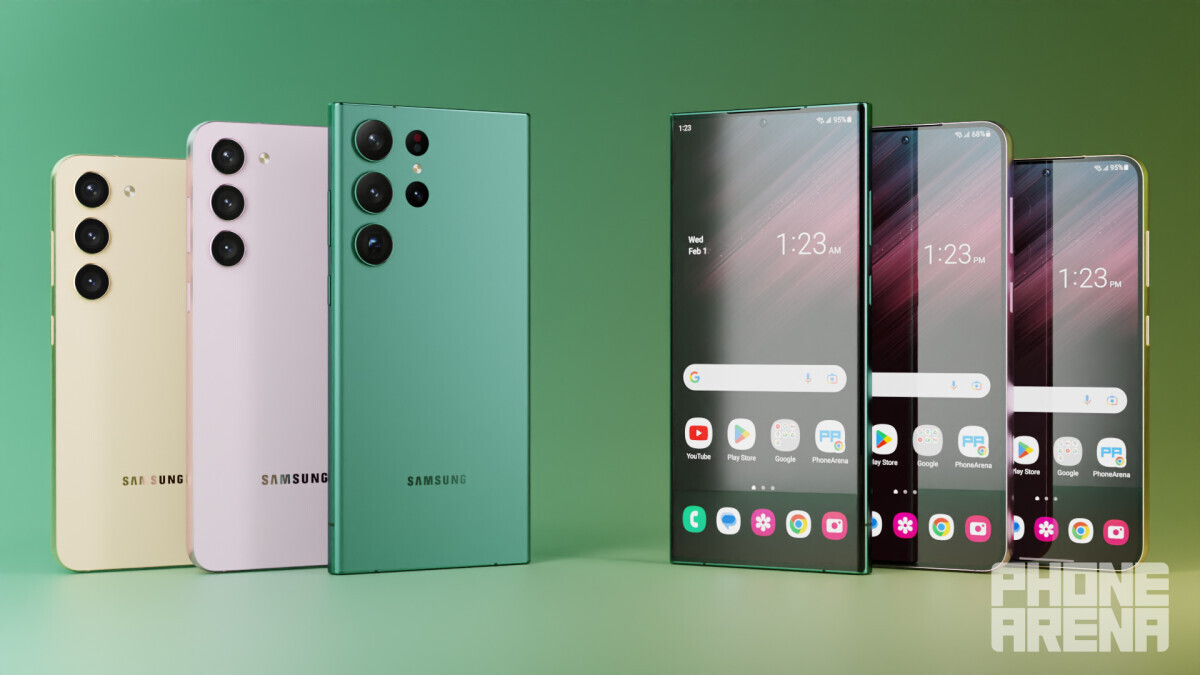 By Scott Marlette Last updated Jan 24, 2023
0
Share
Evan Blass, who practically invented the Twitter tipster category about a decade ago, has just disseminated a tweet giving us our first look at a couple of promotional “posters” advertising the pre-order period for the Samsung Galaxy S23 series. The new flagship phones will be introduced by Samsung on February 1st and pre-orders will be accepted starting at 1 pm EST that same day. The Galaxy S23, Galaxy S23+, and Galaxy S23 Ultra will be released on February 17th.
Right now, those interested in pre-ordering a handset belonging to the Galaxy S23 series can reserve a pre-order and receive a $50 Samsung Store credit for their troubles. One of the posters shows the rear camera setup for both the Galaxy S23 and Galaxy S23+. The other poster displays the rear camera array for the Galaxy S23 Ultra. Once again, with its squared-off corners, S Pen silo, and S Pen support, the top-of-the-line Galaxy S handset takes its design cues from the iconic look of the discontinued Galaxy Note line.
Ever since a Verizon spec sheet for the three Galaxy S23 series models leaked, much of the mystery and suspense of the upcoming Unpacked event has dissipated. That leak even revealed Verizon’s pricing for the three models which starts at $799.99 for the Galaxy S23 (or 36 monthly payments of $22.22), $999.99 for the Galaxy S23+ ($27.77 a month for 36 months), and $1,199.99 for the Galaxy S23 Ultra (or 36 monthly payments of $33.33).

As usual, the Galaxy S23 Ultra is hogging most of the spotlight mostly due to the 200MP ISOCELL HP2 camera sensor that will be driving the unit’s primary camera. Also getting phone enthusiasts reaching for their credit cards is the improved Nightography (photos and videos captured in low-light environments) and the 100x digital Space Zoom. Samsung has already called on the moon to help promote the phone.

You might start thinking about the color you want for your new Galaxy S23 series handset. The leaked Verizon spec sheet shows that the Galaxy S23 will be offered in Lavender and Green while the Galaxy S23+ will be available in Phantom Black and Cream. The color options for the Galaxy S23 Ultra include Phantom Black, Cream, Lavender, and Green. But those might be options available to Verizon customers.

If you are the betting type, you wouldn’t bet against Ross Young. The co-founder and CEO of Display Supply Chain Consultants (DSCC) has a superb track record and he says that the color options for the Galaxy S23 series will be:

Young also says that the Galaxy S23 Ultra could be available in four additional colors, Gray, Light Blue, Light Green, and Red. Those, however, could be exclusive to units ordered directly from Samsung.

Denial of responsibility! TechNewsBoy.com is an automatic aggregator around the global media. All the content are available free on Internet. We have just arranged it in one platform for educational purpose only. In each content, the hyperlink to the primary source is specified. All trademarks belong to their rightful owners, all materials to their authors. If you are the owner of the content and do not want us to publish your materials on our website, please contact us by email – [email protected]. The content will be deleted within 24 hours.
gadget updateGalaxyleakPosterspreorderS23Samsungseries
0
Share FacebookTwitterGoogle+ReddItWhatsAppPinterestEmail

Monitor air quality in your home

Apple updated billions of products this week—here’s everything they…