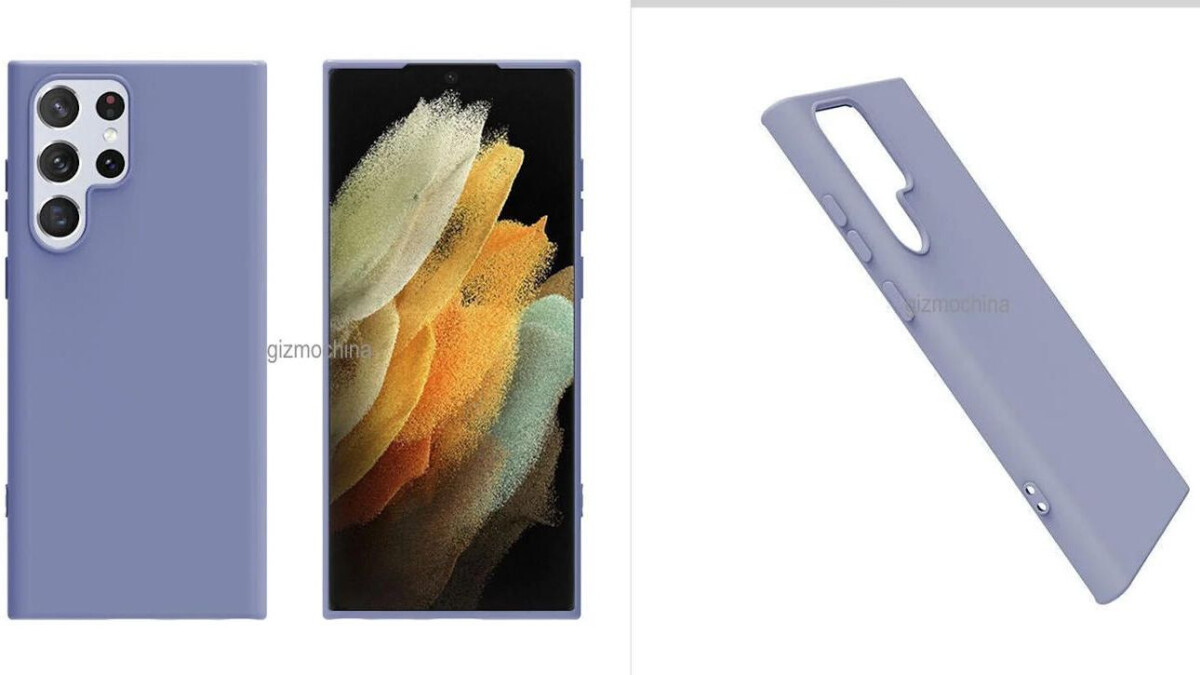 The Samsung Galaxy S22 series is still months away – we’re looking at an official announcement sometime in January 2022. But you know how it is nowadays – leaks and rumors reign free years before a model is released and for better or worse, we have another piece of rumor concerning the Galaxy S22 Ultra and its potential S-Pen capabilities.Earlier this month, an Italian accessory outlet leaked an aluminum dummy of the Galaxy S22 Ultra and confirmed that the phone will have a slot for an S-Pen. Now there’s another rumor to support that – Gizmochina published a couple of case renders for the phone and we can clearly see that there’s a hole in one of the cases to accommodate the S-Pen.

The hole is positioned on the right side of the USB-C port, mimicking the layout of the Galaxy Note 20. These renders are still unofficial, of course, but they do fall in line nicely with the rumors and leaks that have been out so far.

Other than the potential S-Pen confirmation, these case renders also showcase the strange P-shaped cutout for the camera bump – another distinctive feature of the Galaxy S22 Ultra. So, Galaxy Note aficionados will be pleased to see the S-Pen theories getting more and more plausible for the next Samsung flagship.

The leaks and rumors surrounding the Galaxy S22 series have been piling up in the past few months. Back in September, the Galaxy S22 Ultra Geekbench result appeared in the vast web jungle, showing the performance of the rumored Snapdragon 898 chipset.Yesterday, another leak revealed disappointing Galaxy S22, S22+, and S22 Ultra charging speeds – it seems that all three models will charge at 25W max. Regarding the camera – the Galaxy S22 and S22+ might come with the new 50MP ISOCEL GN5 camera sensor, while the Galaxy S22 Ultra will probably use the recently announced ISOCELL HP1 – a huge camera sensor with a 200MP resolution and a new pixel-binning technology.

One of the most exciting features of the Galaxy S22 series is the Exynos 2200 chipset, manufactured using a 4nm process and featuring AMD graphics inside. The GPU, codenamed Voyager, will feature AMD’s RDNA 2 graphics technology with ray tracing support.

While the performance of the new Exynos 2200 remains a mystery at this point, we’re pretty sure that it will indeed use a custom AMD GPU. An ad flyer recently popped up in the Chinese network Weibo describing the benefits of the new ray tracing technology in the Exynos 2200.

Sadly, another rumor has it that most of the new Galaxy S22 units will ship with a Snapdragon chipset inside, instead of the Exynos 2200, due to manufacturing issues and silicon shortages.

Let’s comment on the S-Pen situation. Contrary to popular belief and opinion, we’re perfectly okay with Samsung ditching the Note series and incorporating the S-Pen in the next-get Ultra model.

The Galaxy portfolio has grown over the years to accommodate three (sometimes even four) different models, making the Note obsolete. When the original Galaxy Note launched back in 2011, it was very different from the Galaxy SII flagship that Samsung launched the same year.

Fast forward to the present day, and we have the Galaxy Note 20 and the Galaxy S21 Ultra sharing almost the same specs and features, including the S-Pen support. The overlap between the two series became such that sales started to suffer. It was only logical to shut down the Note line and focus on the S series. Whether we like it or not.

Furthermore, Samsung could just rename the Ultra model to Galaxy S22 Note and make everyone happy.

Denial of responsibility! TechNewsBoy.com is an automatic aggregator around the global media. All the content are available free on Internet. We have just arranged it in one platform for educational purpose only. In each content, the hyperlink to the primary source is specified. All trademarks belong to their rightful owners, all materials to their authors. If you are the owner of the content and do not want us to publish your materials on our website, please contact us by email – [email protected]. The content will be deleted within 24 hours.
Casegadget updaterendersS22SamsungshowslotSPen
0
Share FacebookTwitterGoogle+ReddItWhatsAppPinterestEmail