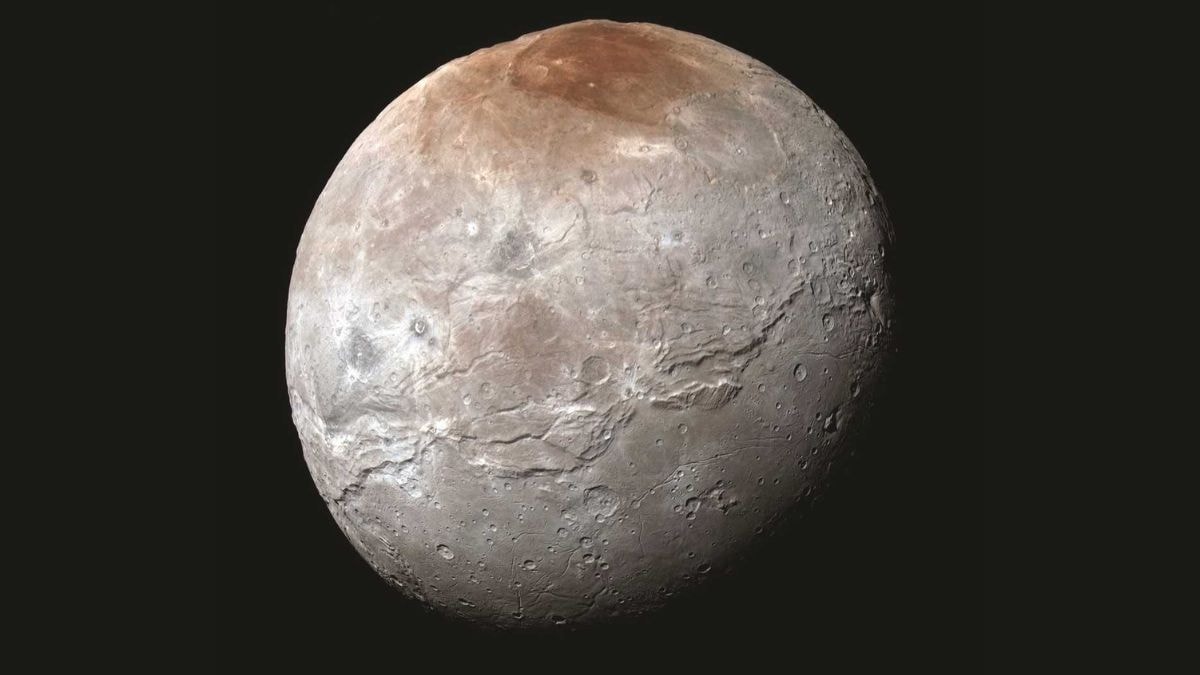 Combining data obtained from several sources, scientists have managed to unravel the mystery behind the red cap on Pluto’s moon Charon and its composition. NASA’s interplanetary space probe New Horizons had captured the reddish region on the top of Charon and collected data in 2015. After the encounter, scientists soon speculated that the tholin-like material on Pluto’s moon could be synthesized by breaking down methane molecules with the help of ultraviolet light.

However, now, scientists from the Southwest Research Institute (SwRI) combined data from the New Horizons mission, exospheric modeling, and laboratory experiments to describe the red spot and shed more light on its origin.

“Prior to New Horizons, the best Hubble images of Pluto revealed only a fuzzy blob of reflected light. In addition to all the fascinating features discovered on Pluto’s surface, the flyby revealed an unusual feature on Charon, a surprising red cap centred on its north pole,” said SwRI’s Randy Gladstone, a member of the New Horizons science team.

The tholins, on the red spot, tend to escape from the surface of Pluto and get frozen upon reaching Charon’s polar region during long winter nights. These are basically sticky organic residues that are the result of chemical reactions powered by light.

“Our findings indicate that drastic seasonal surges in Charon’s thin atmosphere, as well as light breaking down the condensing methane frost, are key to understanding the origins of Charon’s red polar zone,” said SwRI’s Dr. Ujjwal Raut, lead author of the study published in Science Advances.

For the study, the team replicated conditions on Charon’s surface at SwRI’s new Center for Laboratory Astrophysics and Space Science Experiments (CLASSE). They analysed the composition and colour of the hydrocarbons produced in Charon’s winter hemisphere and fed the data into a new model of Charon. This helped them demonstrate how methane was breaking down into residue on Charon’s north pole. According to Raut, their “‘dynamic photolysis” experiment offered information on the role of interpolantary Lyman-alpha in the formation of Charon’s red material.

After conducting experiments, the researchers used a model to estimate the distribution of complex hydrocarbons that emerged in the decomposition of methane under ultraviolet light. “We think ionizing radiation from the solar wind decomposes the Lyman-alpha-cooked polar frost to synthesize increasingly complex, redder materials responsible for the unique albedo on this enigmatic moon,” said Raut. He added that as ethane is less volatile than methane it stays frozen on the Charon’s surface for long after spring sunrise. “Exposure to the solar wind may convert ethane into persistent reddish surface deposits contributing to Charon’s red cap,” Raut said.

Denial of responsibility! TechNewsBoy.com is an automatic aggregator around the global media. All the content are available free on Internet. We have just arranged it in one platform for educational purpose only. In each content, the hyperlink to the primary source is specified. All trademarks belong to their rightful owners, all materials to their authors. If you are the owner of the content and do not want us to publish your materials on our website, please contact us by email – [email protected]. The content will be deleted within 24 hours.
charongadget updateMoonMysteryNASApluto moon charon red spot on its north pole&nbsp;new study answers plutoPlutosred
Share FacebookTwitterGoogle+ReddItWhatsAppPinterestEmail