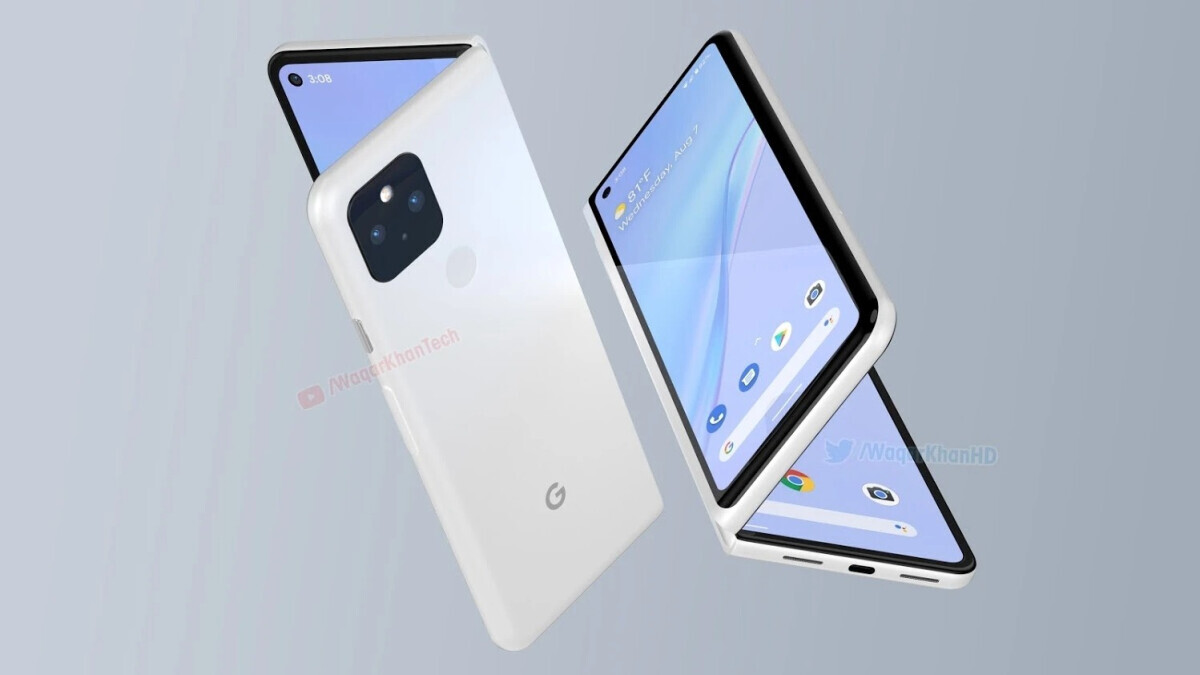 The Pixel Fold originally was expected to resemble the Samsung Galaxy Z Fold 3 that opens and closes like a book revealing a 7.6-inch tablet-sized screen when fully opened. There is a 6.2-inch exterior Cover Screen display and both the smartphone and tablet-sized screens refresh at a rate of 120 times each second (120Hz). If you’re a foldable device, there are a lot of worse things you could aspire to be than the Galaxy Z Fold 3.

As we mentioned earlier, on Wednesday Google released the second beta version of Android 12L (for Android devices with larger screens) and it contained secret illustrations that appear to show the Pixel Fold when closed and when open. The two illustrations are part of an animated look at how users should insert their SIM cards into the phone.

One animation appears to be showing the Pixel Fold’s exterior outer screen with the volume rocker on the right and the hinge on the left. The SIM card tray is on the bottom of the device. Another part of the animation shows a drawing of the Pixel Fold when open exposing the large tablet-sized display.

Oppo Find N showing off its tablet sized screen at left vs. the Galaxy Z Fold 3

Since the images were not present in the first beta release of Android 12L and appeared in the second beta release, we can assume that Google is still busy developing the handset. Another observation made by 9to5Google notes that the illustrations do not show a device with a 22.5:18 aspect ratio like the Galaxy Z Fold 3. Instead, the large interior display is almost square calling to mind the Oppo Find N’s 8.4:9 aspect ratio.

If the Pixel Fold does borrow its form factor from the Oppo Find N, it will help multitaskers since each app will have more room horizontally. Additionally, with the Find N’s nearly square resolution, apps are more apt to recognize the display as a tablet screen and serve up an app’s tablet interface.

This news could be good for both Samsung and Google since there would be room for both manufacturers to mark some territory in the foldable market. Some of the specs leaked in the Geekbench test show that the Pixel Fold will sport 12GB of RAM, just like the Pixel 6 Pro, with 256GB and 512GB of storage.

Google is really going to have to work on quality control if it does release a foldable that could have a price tag in the $1,500-$1,800 range. Already, the company is under pressure for the number of bugs found on the Pixel 6 Pro, a phone that is priced at $899 and up. Google can’t afford to have a series of problems on the Pixel Fold if it wants to be taken seriously in this sector of the smartphone market.

And even though Google is usually to exterminate bugs by sending out a software update, it has temporarily stopped sending updates to the Pixel 6 series and hopes to resume pushing out the updates later this month.

Denial of responsibility! TechNewsBoy.com is an automatic aggregator around the global media. All the content are available free on Internet. We have just arranged it in one platform for educational purpose only. In each content, the hyperlink to the primary source is specified. All trademarks belong to their rightful owners, all materials to their authors. If you are the owner of the content and do not want us to publish your materials on our website, please contact us by email – [email protected]. The content will be deleted within 24 hours.
12LAndroidbetafileFoldgadget updateGalaxyPixel
Share FacebookTwitterGoogle+ReddItWhatsAppPinterestEmail

Star Formation Could Be Much Faster Than Previously Thought: Study