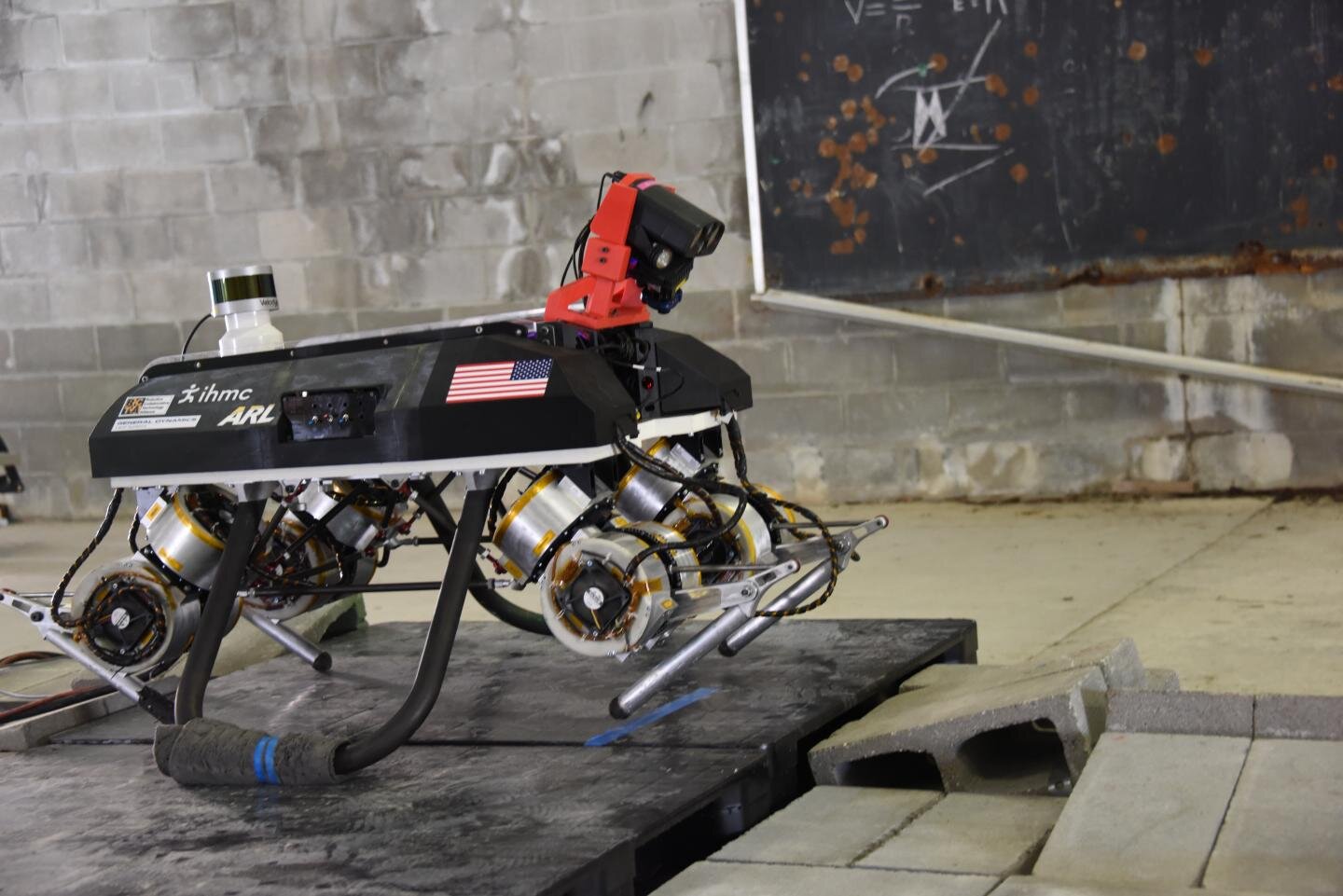 A new formula from Army scientists is leading to new insights on how to build an energy-efficient legged teammate for dismounted warfighters.

Its use could lead to potentially important changes to Army vehicle development. Scientists said they may not know exactly why legged, wheeled and tracked systems fit the same curve yet, but they are convinced their findings drive further inquiry.

“If vehicle developers find a certain design would require more power than is currently possible given a variety of real-world constraints, the new formula could point to specific needs for improved power transmission and generation, or to rethink the mass and speed requirements of the vehicle,” Gart said.

Inspired by a 1980s formula that shows relationships between the mass, speed and power expenditure of animals, the team developed a new formula that applied to a very broad range of legged, wheeled and tracked systems—such as motor vehicles and ground robots.

Although much of the data has been available for 30 years, this team believes they are the first to actually assemble it and study the relationships that emerge from this data. Their findings show that legged systems are as efficient as wheeled and tracked platforms.

“In the world of unmanned combat aerial vehicle and intelligent munitions, there is a growing role for dismounted infantry that can advance, often for multiple days, and attack in the most cluttered terrain such as mountains, dense forests and urban environments,” said Kott who serves as the laboratory’s chief scientist. “That’s because such terrain provides the greatest cover and concealment against the unmanned aerial vehicles. That, in turn, demands that dismounted infantry should be assisted by vehicles capable of moving easily in such a broken terrain. Legged vehicles—possibly autonomous-would be very helpful.”

One of the problems with legged robots, Kott said, is they seem to have poor energy efficiency, which limits teaming with soldiers in austere battlefields.

“For the past 30 years, U.S. military scientists have addressed a number of challenges in developing autonomous vehicles,” said Kott. “Ground vehicles that maneuver on wheels or tracks, and air vehicles that resemble small airplanes which we call fixed wing and small helicopters, which are rotary wing, are now quieter and easier to integrate in troop formations. But for legged platforms, many hurdles remain elusive, and a huge one is making them energy efficient.”

The paper explores whether artificial ground-mobile systems exhibit a consistent trend among mass, power, and speed.

As a starting point, the team investigated a scaling formula proposed in the 1980s for estimating the mechanical power expended by an animal of a given mass to move at a given speed, and compared this to a range of artificial mechanical systems varying in size, weight and power that are autonomous or driven by humans.

The team found the answer to their research question: A similar, consistent relationship does in fact apply also to ground-mobile systems including vehicles of different types over a broad range of their masses.

To conduct this study, the team collected diverse ground mobile system data from a literature review of previous studies and published data sets.

They studied wide ranges of sizes and morphologies within a data set that combined systems that included, for example, a 17th-century British cannon, the Ford Model T, the M1 Abrams tank and an ACELA train.

Gart said their research is relevant to designing ground mobile systems because it helps designers determine tradeoffs among power, speed and mass for future terrestrial robots for defense applications.

One Army goal is to develop new types of autonomous or partly autonomous ground vehicles to deliver supplies to soldiers in challenging terrains, he said.

“To haul supplies, it must be able to carry a certain weight, or mass, at a certain time or speed,” Gart said.

The formula can approximate the amount of power that vehicle will need, researchers said.

“The Army must develop feasible yet ambitious targets for tradeoffs among the power, speed, and mass of future terrestrial robots,” Kott said. “It is undesirable to base such targets on current experience, because military hardware is often developed and used for multiple years and even decades; therefore, the specifiers and designers of such hardware must base their targets—competitive yet achievable—on future technological opportunities not necessarily fully understood at the time of design.”

The formula developed in this paper gives such a target and could enable the Army to make predictions of future performance of ground platforms such as legged robots, given design constraints like vehicle and motor weight, and desired speed, he said.

Denial of responsibility! TechNewsBoy.com is an automatic aggregator around the global media. All the content are available free on Internet. We have just arranged it in one platform for educational purpose only. In each content, the hyperlink to the primary source is specified. All trademarks belong to their rightful owners, all materials to their authors. If you are the owner of the content and do not want us to publish your materials on our website, please contact us by email – [email protected]. The content will be deleted within 24 hours.
energyefficientgadget updatelegsrobotsSimilaritysuggeststargettech boy
Share FacebookTwitterGoogle+ReddItWhatsAppPinterestEmail