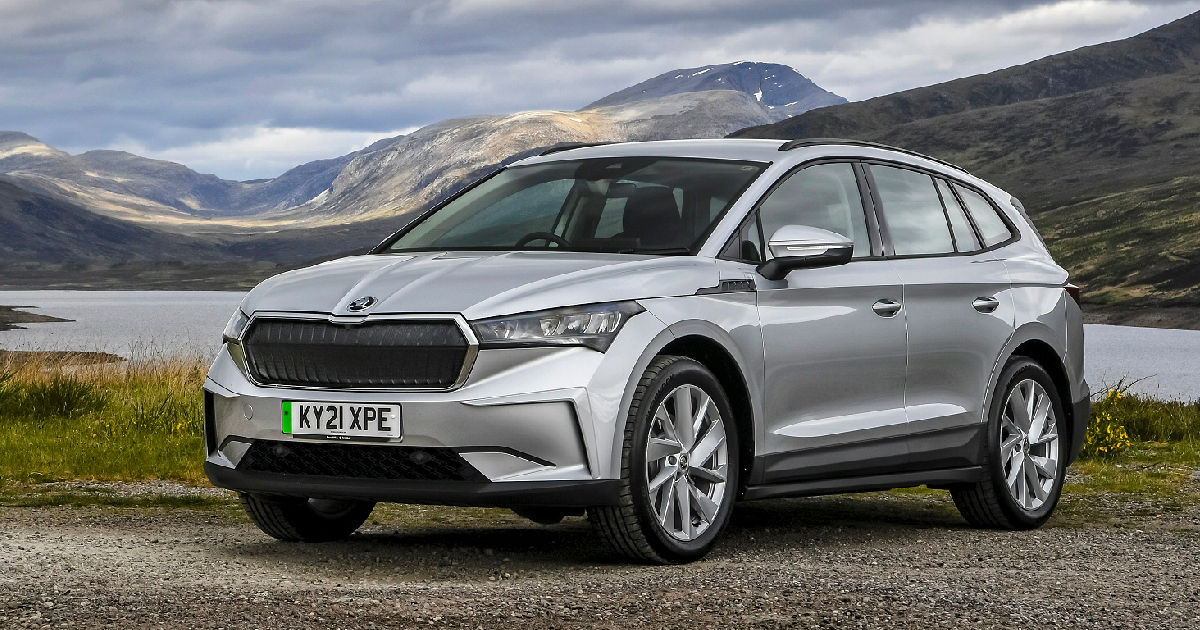 The Skoda Enyaq iV shares its platform with the Volkswagen ID4 and Audi Q4 e-tron crossover SUVs. The trio is part of the VW group’s EV offensive aimed at global markets. The Enyaq iV EV could form a part of the VW 2.0 strategy for the Indian market that began with the introduction of the Skoda Kushaq compact SUV in 2021.

The Skoda Enyaq iV electric SUV has been spotted testing on Indian roads undisguised and could hint at a launch in the future. The Skoda Enyaq iV EV SUV could become the first EV from the Czech automaker’s portfolio for the Indian market. The VW group that has adopted the India 2.0 strategy could bring in a number of electrified SUVs in the future.

The Skoda Enyaq iV electric SUV can be identified to be the top-spec variant, Enyaq iV 80X. This gets a dual motor set up paired with a 77kWh battery pack that combined puts out around 265hp of peak power. The AWD Skoda does the 0-100kmph sprint in 6.9 seconds flat and delivers a WLTP certified 513km of range on a single charge.

The vehicle that was spied on, was the Lounge trim level. This trim level gets Skoda’s Anodised Cross Decor theme which equips the car’s interiors with contrast black and light grey. The vehicle also gets a fairly substantial feature list that includes 19-inch Proteus alloy wheels, the full-size 13-inch touchscreen, a digital instruments screen, ambient lighting, a leather-wrapped steering wheel, contrast yellow stitching on seats, and upholstery that is sustainably sourced.

However, Skoda Auto India might also consider bringing in lower-spec models that have a single motor (2WD setup) and lower trim levels to achieve a more aggressive price point. In Germany, which happens to be Skoda’s single largest market in the world, the Enyaq iV electric SUV’s prices start at €44,750 (~ Rs 37.3 lakh). In India, Skoda could bring the vehicle via the CBU route which could inflate the prices by a long margin. The Enyaq iV could be priced around Rs 60 lakh in India.

Denial of responsibility! TechNewsBoy.com is an automatic aggregator around the global media. All the content are available free on Internet. We have just arranged it in one platform for educational purpose only. In each content, the hyperlink to the primary source is specified. All trademarks belong to their rightful owners, all materials to their authors. If you are the owner of the content and do not want us to publish your materials on our website, please contact us by email – [email protected]. The content will be deleted within 24 hours.
autocrossoverelectricEnyaqgadget updateIndialaunchnews
Share FacebookTwitterGoogle+ReddItWhatsAppPinterestEmail

Save over $650 off an unlimited lifetime subscription to Offcloud

Wordle 352 for June 6 will help you beat the Monday blues! Hints and answer here